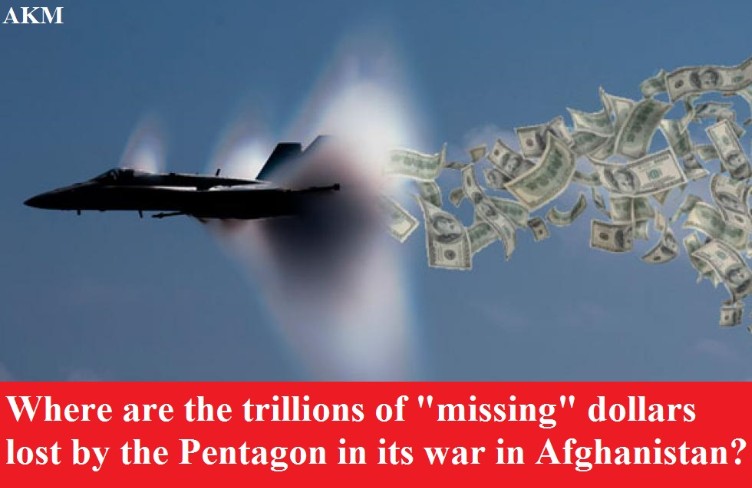 The Afghan Freedom fighters have new anti-aircraft weapons which are changing the war.  The US should change its war strategy to a peace strategy.  History has shown that superpowers cannot win wars in Afghanistan.

It was recently reported that trillions of dollars are missing from the Pentagon. Why is the U.S. Congress not investigating Pentagon’s missing money? I think Congress is not doing its job. It is time Americans wake up and hold Congress accountable. After all, Congress works for the people and not for war profiteers. I believe this unaccounted for trillions of dollars is just the tip of the iceberg. I wonder how many trillions are missing from other departments and agencies of the U.S. government like the CIA and U.S AID. I do not believe that SIGAR is allowed to truly investigate. Congress does not want to hear from Afghans on the ground other than war profiteers and those Afghans working with the Pentagon.

I strongly believe that some members of the U.S. Congress know what happened to the “missing” money. When I traveled to Afghanistan in 2012, I was told by some influential Afghans that some members of the U.S. Congress, who had involved themselves in the war in Afghanistan, are profiting from this war in unlawful and unethical ways. Since the U.S. invasion and occupation Afghanistan has become a narco state with rampant, systemic corruption, which has made it easy for money to go “missing” and has attracted those officials who want to profit from the war. History does repeat itself. In the 19th century, the British superpower lost its wars in Afghanistan. Soon after it lost its status as a global superpower. In the 20th century, the Afghans defeated the Soviets, who were forced to withdraw in 1989. The Afghan Mujihideen had anti-aircraft weapons in the last part of that decade. The Soviet Union lost the war and was drained economically by the decade long war. Soon after the it fell apart, the Warsaw Pact was demolished and it did not exist. Now, in the 21st century, the United States has invaded occupied Afghanistan and waged war for almost 15 years. It has spent trillions on this war/occupation, but yet it has not won anything. In fact, the U.S has more debt and is less secure. Only the war profiteers have won and lined their pockets. The United States has borrowed trillions from China and others. China is winning. Right now, the U.S. must be very careful not to slip down the slope like the former superpowers because China and Russia want to see the United States fail and topple economically. China wants to be the only superpower. Russia wants to be with China and be a superpower again. Afghanistan is a money pit and a war that cannot be won. I believe the solution is that the U.S. must change its policy from a war policy to a peace policy. The war profiteers are pushing for a continuation of the war. To achieve true peace, the U.S. must stop funding this war and must carefully hold direct negotiations with the Afghan Freedom Fighter and hold sincere talks to bring true peace. Otherwise, I fear that the U.S. will crumble just like the other superpowers have and there will not be peace in Afghanistan. Both countries will lose. If the United States continues on the same course in Afghanistan, China will be the only superpower and Russia will regain its status.

I hate war. I want true peace and stability in Afghanistan. The American people and the Afghan civilians especially women, children, the elderly and the Afghan majority, the villagers, are the victims of this war. The United States must stop funding this war and seek true peace. I strongly believe it can achieve its goals and protect its security interests without waging war against the Pashtun majority. The U.S. Congress must stop the hijacking of the U.S. government by war profiteers and special interests.

Why does the United States continue a war it cannot win? This war continues because of the war profiteers’ greed, the U.S.’s goal to control the vast untapped Rare Earth Elements (REEs) in the Helmand Region, which are needed to secure a supply chain independent of China, and because of its strategic location as the new outer defense perimeter for the United States.

Now, Secretary Kerry is talking with India to supply weapons to the U.S. “selected” Afghan administration in Kabul. It appears that the Department of State’s strategy now is to pit Hindus against the Pashtun Muslims. It is another twist to the U.S. divide and conquer policy being used in Afghanistan. This new strategy certainly will lead to more war and lessen any chance of peace.

As I have stated many times, the U.S. government needs to directly talk with the Afghan Freedom Fighters. I believe this route has the greatest chance of bringing true peace in Afghanistan. The middle men need to be initially cut out of the process. The Afghan Freedom Fighters want to negotiate directly with the U.S. without any foreign countries or war profiteers interfering. They do not want to repeat the mistakes made during the 1980s during the Soviets’ war/ occupation when the negotiations went through Pakistan, who profited enormously from that war. Unfortunately the public only hears the war profiteers’ perspective.

Afghans are greatly concerned and angry about the killing of civilians and about their tribal and religious Islamic leaders, and outspoken students, who are political activists, who are being targeted and killed by the U.S/NATO and the Afghan army. Based on what has occurred during almost fifteen years, it appears that in order to achieve its goals the U.S. government has to eliminate the native population, the Pashtun, who is fighting for its independence. The U.S. government is trying to eliminate the Pashtun tribe, which is the largest native tribe in the world . Anyone, who has with knowledge about what is happening on the ground, knows that the Pashtun tribal leaders , Pashtun intellectuals and religious leaders are being killed and eliminated by the U.S. and its puppets with their weapon of choice being drones. The Pashtun villagers are being raped, killed and forced out of their homes after their villages are bulldozed or bombed, especially in the Helmand region because the Pashtun’s land contains the largest untapped REEs worth trillions. The U.S. and its puppets are destroying their villages, killing those who defend themselves, raping the women and children and forcing them to leave. These tactics sound really familiar to me.

I believe history does repeat itself. This U.S. imperialistic campaign of genocide against the native Pashtun tribe and the theft of the Pashtun’s home land and REEs is exactly what the United States has done to the Native American tribes in the U.S. in the past centuries. The U.S. tactics of killing the leaders of the Native American tribes, who resisted occupation, is being implemented today in the Pashutn villages. The U.S. tactics of forced relocation , theft of the native tribe’s land rich in valuable resources, and divide and conquer are being implemented against the native Pashtun tribe, who pose the only threat to the United States’ achievement of its three goals.

It reminds me of the forced relocation of the Cherokee Native American tribe, who resisted the U.S. invader/occupier in the 19th century. In 1824-25, the U.S. killed the Cherokee leaders, seized the valuable Cherokee land, and forced the Cherokees to relocate to undesirable, strange land called the “Indian territory.” This war crime is referred to as the “Trail of Tears”. Does this sound familiar? Now, a few greedy Afghan puppets are signing agreements with the U.S., Pashtun land rich in REEs is being seized with villages destroyed, Pashtun tribal leaders are being killed, and Pashtuns are being forcefully relocated to “tribal” territory.

History has shown that Afghanistan is the grave yard of the superpowers because the Native Afghans, who are the majority, cherish their freedom and never surrender when foreign troops are on their soil. I hate violence and war. I only want true peace in Afghanistan and an end to war, but I honestly do not see that happening as long as the U.S. continues with its present policy of divide and conquer and exclusion of the Afghan majority. I do not see the war ending as long as the U.S. Congress funnels trillions of dollars to war profiteers and funds this ugly war. I do not see the war ending as long as greedy war profiteers line their pockets and the U.S. government does not investigate the “missing” trillions of dollars and prosecute the criminal war profiteers. The United States’ “selected” leader from the outside, Ghani, is not be accepted by the Afghan majority, who will not talk peace with the puppet or his selected cabinet. He is a war profiteer. He is part of the corrupt system. Unfortunately with the new puppet government of ethnic minorities, war lords, communist war criminals and drug traffickers it will just be more of the same- corruption, drug trafficking, the stealing of the Afghans REEs, violence and war.

Four decades of suffering war is enough for the Afghan people. Fifteen years of war is enough for the American people. I hope that the U.S. government changes its policy in Afghanistan. Borrowing money from China and amassing trillions in debt to finance the war/occupation of Afghanistan will only lead to the United States’ ruin. China is waiting for this to happen so that it will become the only superpower. Russia is waiting for this to happen too. The United States should focus on its true enemies, communist China and Putin’s “still communist” Russia instead of targeting and killing the Afghan majority. I strongly believe true peace can be achieved that will be beneficial to Afghans and Americans. Although will not be financially beneficial to the war profiteers.

The U.S. Congress needs to investigate the trillions of “missing” dollars and stop funding this ugly war in Afghanistan. The war policy needs to change to a peace policy.