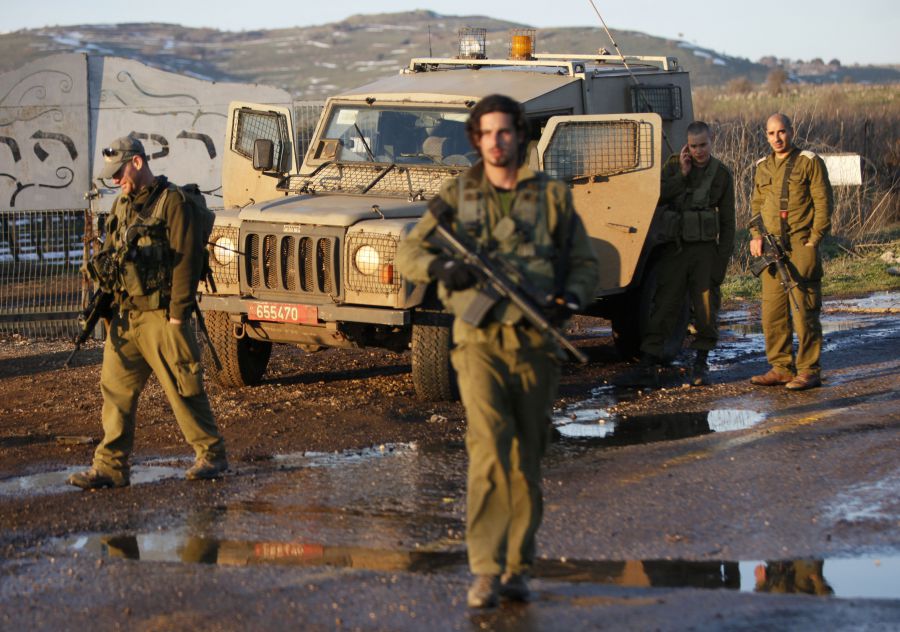 [ Editor’s Note: Israel, despite its occasional shelling and air attacks in Southern Syria, has remained low key during most of the Syrian conflict. Little mishaps, like losing a Dolphin sub when it was caught in shallow waters by a Syrian helicopter that dropped a torpedo on it, were an unusual bad day.

Israel had its revenge a few days later when it dropped a mini-nuke on a big ammunition base outside Damascus, which lit up the night sky when it went off. But an unknown video recorded the event, and gave VT experts the ability to discover the “ball lighting” inside the plasma ball of the mini-nuke that had been used on the depot.

That got us focused more on looking for mini-nuke footage and residue fingerprints, and we found more. MSM never mentioned our reporting, not even to bash it. They were too smart for that, because they knew we would challenge them to a public debate and bring our experts in to stamp the deal. No one with any standing ever challenged us on our nuclear reporting, including 9-11.

But Phil is going to review how, when all hell is breaking loose all over the Mideast, investment capital is rolling into Israel. I will let him tell you all the rest. Hang onto your hats — it’s quite a ride… Jim W. Dean ]

A Haaretz article headline this week reads; “Israel Has Never Been So Secure or Prosperous, but Don’t Thank Netanyahu.” It is a headline that punctuates a serious question some experts have had since the so-called Arab Spring began; “Why on Earth is Israel so quiet, so untouched in all this mayhem?”

Since Turkey now seems poised to stab Vladimir Putin in the back once again, maybe it’s time we addressed the extraordinary fact of Tel Aviv’s miraculous inoculation from terror.

News Turkey rolled tanks into Syria to fight alongside Barack Obama’s alleged “moderates” at the same moment US Vice President Joe Biden arrives to speak with President Recep Tayyip Erdoğan. Suddenly, amazingly, Turkey does yet another about face on the world stage in doing what would seem to be the Obama White House’s bidding. Biden, supposedly in town to patch up NATO, lends a foreboding accent to the most jumbled up mess on our planet.

Syria really has become, a near hopeless quagmire now, and perhaps this was some kind of stop gap strategy, intended as a final jab at Russia, Putin, Assad, and the Iranians. But regardless of who “IS” at play in all this geopolitical circus act, Israel remains wholly in tact, completely AOK from deep inside the tinder box. No fire or flickering flames of jihadist terror even lick at the borders of the most hated state in the Arab world. It’s biblical, epic, right out of Indiana Jones and the quest for the Arc of the Covenant.

The more killing and chaos reins on the people of Syria, the wider spread ISIL’s terror spreads, the gnawing mystery of Israel’s exclusion in all this eats at me. The whole world is on fire, austerity and poverty, draught and regime change stampede and Jerusalem simply has to be cordoned off by the lord god Yahweh, or some other mysterious force.

I know I have made the point, but the surreal nature of this incongruent “exclusion”, the atypical quietness of Netanyahu, it gob smacks me. This small and seemingly insignificant spot on our world, it’s becoming an investment Mecca at the same time the rest of the world is unraveling.

According to the HAARETZ report, said foreign investment reached $285 billion, or three times its level in 2005. Zvi Bar’el, the Middle Eastern affairs analyst for Haaretz , he really hits the proverbial nail on the head, but I feel the need to drive the nail home.

With Genie Oil and the western billionaires drilling in the captured Golan Heights now, it’s abundantly clear Israel’s backing feels indomitable. Why the Israel political position is mimicking the western media position of “all in” favor of regime change.

But Netanyahu’s official position is “neutral” where Israel’s worst ever enemies are concerned. The Jewish state backing mercenary war in neighboring Syria could never happen, oh no.

But wait! When the security forces of the Syrian Arab Army (SAA) apprehended a vehicle loaded with a big load of Israeli-manufactured weapons in Syria’s southern As Swaida’a governorate, Netanyahu’s eyes were seen shifting side to side like a shifty hidden instigator on the schoolyard.

Then Newsweek reported how Syrian rebels were getting medical treatment inside Israel, and once again the country’s leader gawked sheepishly, his taught little mean boy grin growing arrogant, then pouty, reflecting the multi-polar character of a quizzically powerful man and nation. How can such a tiny spec of a country dictate so much? Again, I am remiss for clear explanations.

This Independent report reveals interesting facts about the hidden war Israel is waging against Assad. In the story an injured Syrian rebel refers to Russia’s and Syria’s presidents so:

“Putin is the big Satan, Assad is the little Satan, Israel is now a friend, they help us.”

And there it is in black and white, my answer to how come Israel is protected by both Allah and Yahweh, Jerusalem rabbis will soon be reciting both the Torah and the Qur’an, the Israelis are just that friendly and accepting.

Next we hear Netanyahu will be building high rise penthouses for Palestinians in Gaza. Sorry, the whole affair just stinks, you understand.

Since the so-called the Arab Spring claimed its first dictator, Tunisia’s Zine El Abidine Ben Ali, virtually every Washington think tank, and every corporate owned major media outlet has proclaimed Israel as the “big loser” of Arab Spring. The logic there being, instability on her borders makes Israel more nervous.

Meanwhile, the aforementioned money funnel into Israel, the militarism of the Obama legion, reflect the latest mayhem resultant of the Sykes-Picot Agreement and later the Balfour Agreement, which gave over Palestine to the Zionists in the first place.

This Intifada report tells a lot about the past and current Middle East mess. My point in linking to Intifada being, researchers today must examine ever angle, in order to even be able to sniff the truth. I think what we are looking at now, is a real and tangible proof Israel wants that mythical conspiracy theorist’s wonderland known as Greater Israel.

Greater Israel! It has a ring to it, doesn’t it? And nothing makes more sense. I quote from author Dr. Elias Akleh:

“Syria is the main target; the prize; the king to be checked-mate. With American money and with the cooperation of some Arab officials, paid operatives incited some Syrian citizens, motivated by ethnic and religious background, to demonstrate in the streets demanding reform and regime change.”

At this juncture I think it is necessary to examine the validity and scholarly nature of the chaotic world we see ourselves living in. The question of “which side professing the most logical story?” this should direct us all. Did a series of Arab uprisings just happen across the breadth of North Africa across the Arab world?

Is Israel blameless, cuddled fearfully inside the atomic bomb about to blast the world to pieces? Or is the dissenting view gaining impetus? Is there really a world order bent on keeping control, of what the elites have always controlled? Which ideas make the thinker crazy or a conspiracy theorist? And which ideas make the most sense now?

I think that 100 years from now some governing body will try Israel like the Swiss banks were tried. A sane lay person would just say; “There’s no way in hell Israel did not play a major role in this chaos.” The only question for Israelis is, “Did God really will it?”