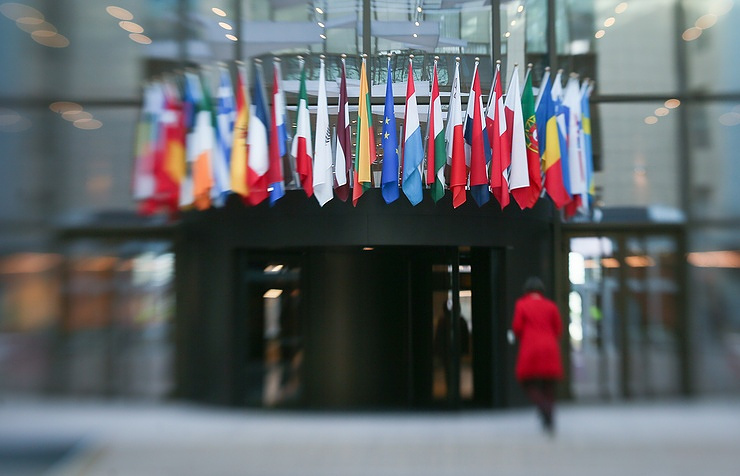 [ Editor’s Note:  These are just ceremonial, place holder sanctions…all part of the sanctions poker playing. The EU knows who is getting the brunt of the the silly sanctions folly and it is not the Russians.

Ukraine is now the EU and NATO’s Tar Baby. They know that everybody knows that Poroshenko never intended to live up to fulling his side of the accords, and so far the West has let him get away with it.

No one expects Ukraine to ever repay its loans. Only a war that gives the West something it wants can be used to dodge having to pay up, and waterboarding all the oligarchs to make them confess where all of their stolen money is. The court appointed receivers could sell tickets for that.

While this pettiness is going on,  Bibi is about to wrap up getting his $40 billion ten year funding for Israel, all debt financed  by American citizens, and then maybe throw the US over to work with the Russians on the next Palestine peace conference. You know, those things that Israel attends every decade or so, sometimes agrees to some things, and then never follows through on any of them… Jim W. Dean ]

BRUSSELS, September 7.  Ambassadors of 28 EU countries agreed at a meeting in Brussels on Wednesday to extend individual sanctions against the citizens of Russia and the self-proclaimed republics in eastern Ukraine for another six months, a source in the EU Council told TASS.

“Ambassadors of the EU countries approved today the extension of restrictive measures until March 15, 2017,” the source said, adding that the decision is yet to be officially backed by all 28 EU countries at the meeting of the EU Council and published in the Official Journal.

The EU Council is expected to take the decision by September 15 when the current sanctions expire, the diplomat said. The blacklist includes 146 individuals and 37 legal entities.

“We expect no changes in it,” he added.

Last time the blacklist was extended for six months on March 9. The sanctions were introduced against representatives of the Russian leadership, politicians, businessmen and security officials as well as nearly all members of the leadership in the self-proclaimed Donetsk and Lugansk People’s Republics. All of these persons are banned from entering the EU and their bank assets are frozen.

Besides, the blacklist includes 37 organizations, among them military and political structures of the DPR and LPR. The European businesses cannot maintain any contacts with them.

The EU summit in October is due to hold a detailed discussion on relations with Russia and the possibility of lifting or weakening the sanctions regime starting from the beginning of 2017.