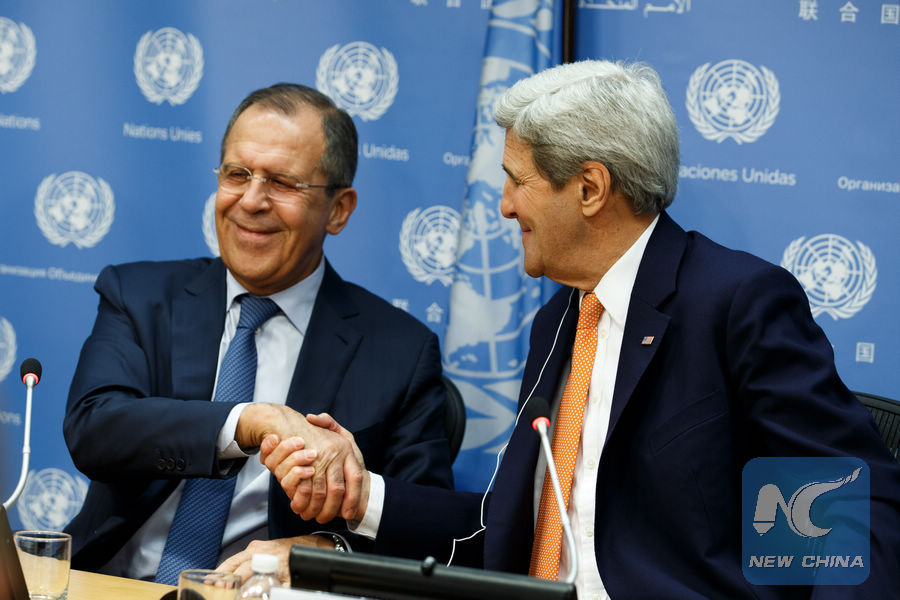 [ Editor’s Note: Well I was lucky, because in my last Press TV, The Debate show on Syria, I was optimistic that Kerry and Lavrov would work out a deal, because they both had invested so much time in the negotiations they would both look bad with a fizzler.

The big news is that the US caved on its Terrorist Tango and has agreed to set up a joint military commission with the Russians to delineate the moderate opposition from the jihadis, with al-Nusra being the big target.

The US can no longer make the endless charges of the Russians bombing the FSA more than ISIL.

There was no surprise over the zero mention of Turkish forces inside Syria now, creating the buffer zone Erdogan always wanted. That had not been a focus of the talks when they were started, so all were glad to table that issue for another time.

The US demand that the Syrian Air Force stand down was not mentioned, but the plans for a joint air campaign by the US and Russia against the Jihadis indicated that the SAF would not participate. It seems that was a trade off for the US agreeing to separate the FSA from the terrorist targets.

It will be a cold day in hell before the Yeminis  ever do that. They will suffer with pride, versus groveling in refugee camps inside their own country. Those that feel they are the losers have a lot they can do to torpedo the ceasefire, and they will certainly do that if their proxy terrorists are bombed by any US-Russian-Syrian anti-terrorist bombing campaign… Jim W. Dean ]

Russia and the US have agreed on a new ceasefire plan on Syria that includes a ban on government airstrikes in certain areas and cooperation on strikes against jihadists, Russian FM Sergey Lavrov announced after the marathon talks with the US’s John Kerry.

Opening the much-awaited press conference after some 13 hours of talks, Kerry said that the two have agreed on a comprehensive approach to Syrian reconciliation.

He called “on every Syrian stakeholder to support the plan that the United States and Russia have reached, to … bring this catastrophic conflict to the quickest possible end through a political process.”

According to Kerry, the plan is to ensure that Syrian government forces will not carry out combat missions where the so-called moderate opposition is present.

Speaking of fight against Al-Nusra and its efforts to blend with moderate rebels, Kerry stressed “going on Al-Nusra is not a concession to anybody” but “is profoundly in the interests of the US.”

Kerry also outlined an establishment of the Russian-US Joint Implementation Centre (JIG) that would serve the purpose of“delineation of territories controlled by Al-Nusra and opposition groups in the area of active hostilities.”

Taking the floor, the Russian FM confirmed that Russia and US had agreed to coordinate airstrikes in Syria, “provided there is a sustained period of reduced violence.”

The first step toward the implementation of this clause will be a 48-hour ceasefire in Syria, Lavrov said. He elaborated that the ceasefire comes into effect on September 12 and should last for at least seven days.

“After the ceasefire regime will be in effect for seven days, we will establish an implementation centre, in which the military and the representatives of Russian and US intelligence will handle practical issues, separating terrorists and opposition,” he added.

The Russian FM said that the diplomats have negotiated on five separate documents at the talks.

“Despite the mistrust and attempt to disrupt what we have agreed upon, we managed to work out a package of documents, there are five of them. It allows us to set an effective coordination in the fight against terrorism, to expand the humanitarian access to distressed population, first and foremost in Aleppo,” Lavrov said.

Due to the sensitive nature of the information contained in the agreements, they will not be made available to general public, Lavrov said.

“We cannot make these documents public. They contain rather serious, sensitive information. We don’t want it to fall into hands of those who would surely try to disrupt the implementation of the measures stipulated within in the framework of humanitarian delivery supplies and in other parts of our agreements.”

According to the agreement, both Syrian government and opposition forces will “be required to provide safe, unhindered and sustainable humanitarian, commercial and civilian access to eastern and western Aleppo,” Kerry said.

Lavrov emphasized the importance of all opposition groups being included in the negotiations for the reconciliation process to succeed.

“It is the demand of the UN Security Council. Resolution 2254 proclaims that the negotiations should be inclusive, with participation of all Syrian parties, including the groups that have been formed in Moscow, Cairo, El-Riyadh and other places,”he said.

The minister added that there were provocations by some unspecified countries that aimed to portray one of the groups as the only legitimate representative of Syrian opposition at the talks.

Meanwhile, political analyst Ammar Waqqaf has cast doubt on the sincerity of Kerry’s assertion that “going on Al-Nusra”was never a negotiating point.

“United States have made a big decision in ditching Jabhat Al-Nusra to preserve the other fighting groups, the other what they call the moderate fighting groups,” the analyst told RT, calling it the “cornerstone” of the deal.

Waqqaf is sure that Washington’s move was prompted by the rapid advance of Syrian armed forces on rebel positions, which would have imminently led to the “severe deterioration” of the so-called moderate forces and hardline terrorist groups, including Al-Nusra, alike.