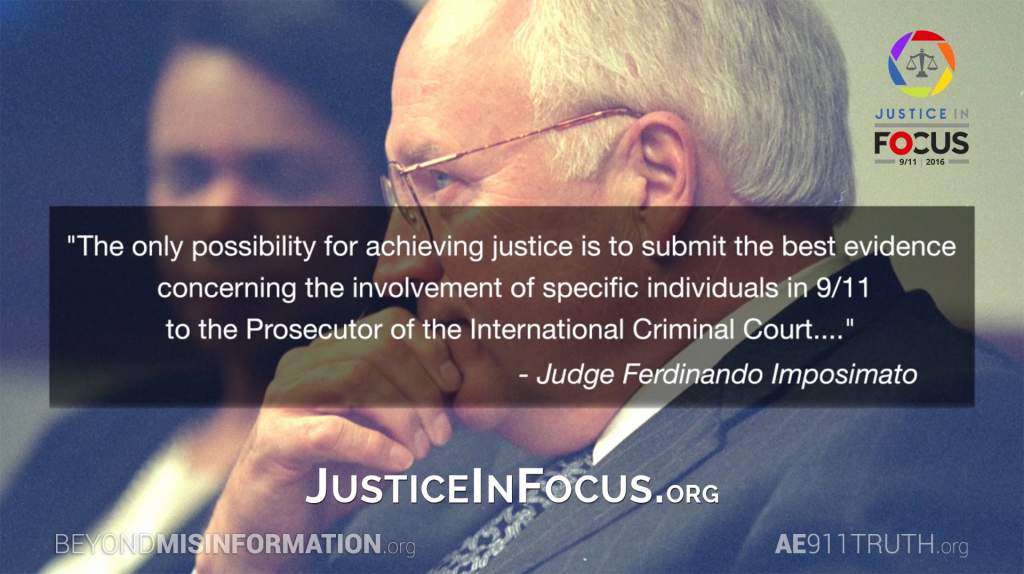 The Honorary President of the Italian Supreme court, Judge Ferdinando Imposimato, along with several high-powered lawyers, have signaled their intention to go after the real perpetrators of 9/11 in domestic and international courts.

The announcements came Saturday at the Justice in Focus conference at New York City’s historic Cooper Union. This historic conference continues on Sunday, September 11th, beginning at 10 a.m. Eastern – watch the livestream at No Lies Radio.

Judge Imposimato is pushing for 9/11 be tried in the International Criminal Court in the Hague. He suggested that the key suspects are neoconservatives who may have orchestrated it as an “operation to justify the 2003 war on Iraq.”

Saying “We must know our past in order to understand our present and be able to predict our future,” Judge Imposimato spoke on “9/11 as Strategy of Tension.” He compared 9/11 to Operation Gladio, the CIA-NATO sponsored false flag terror program that slaughtered hundreds of innocent people during the Cold War. Those killings were blamed on leftists in an effort to keep pro-American right-wing authoritarian regimes in power. Today, similar mass killings are falsely blamed on Muslims. Imposimato mentioned the name of a suspect in both the Italian Gladio massacres and 9/11: the infamous Michael “Enter Into Evil” Ledeen.

Judge Imposimato knows Gladio from firsthand experience. He personally presided over key Gladio trials, including those of the alleged assassins of Prime Minister Aldo Moro and the would-be “lone assassin” of Pope John Paul II. Today, Imposimato recognizes these as false flag events orchestrated by US military and intelligence services in conjunction with elements of organized crime.

According to Judge Imposimato, the Strategy of Tension dates back to 1947, when the American Council in Rome provided weapons to right-wing mafia-linked forces that massacred labor activists. The P2 Masonic Lodge and the mafia became key partners in the US government’s Gladio network of terrorists disguised as “stay-behind armies” allegedly set up to resist a mythical future Soviet invasion.  Imposimato showed the crowd a map of the various criminal headquarters of Gladio-linked groups; they turn out to be situated around the US Embassy in Rome.

Imposimato also discussed the Strategy of Tension in 1990s Algeria. He cited an Algerian general’s 2001 confession indicating that military death squads, not “radical Islamists,” murdered more than 100,000 civilians in a massive wave of false flag terror attacks that swept that nation during that decade. The international media’s complicity in the Algerian false flag massacres may have encouraged the 9/11 perpetrators to believe they would also enjoy mainstream-media-generated impunity.

While Imposimato is pushing for an ICC trial of 9/11 suspects, celebrated activist lawyer Daniel Sheehan believes the US court system could also conceivably provide a viable legal venue. Sheehan has won an amazing series of legal and moral victories in “dangerous” political cases including the Pentagon Papers, Watergate, the Karen Silkwood case, and Iran Contra. But he says 9/11 looks like the biggest hot potato political case of all time. Referring to his history of winning huge and seemingly impossible cases, Sheehan said:

I’ve climbed a lot of hills. And this is one major hill that you’re talking about climbing. It may be the biggest hill ever. One of those crimes that shake the foundations of the legal order itself.”

Sheehan – along with Judge Imposimato, William Pepper, and other legal experts – will be part of a panel during tomorrow’s presentation of evidence that could form the basis of a case against the 9/11 perpetrators. He advised those planning to pursue 9/11 justice in the courts that “you need to be careful who you name as plaintiffs and defendants. Top-level defendants will lead to national security claims” and the case will be thrown out. Instead of currently serving officials, he said, the case will have to target retired officials and others who do not enjoy sovereign immunity.

Another legal expert at the New York conference is William Veale, whose case against Bush, Cheney and other 9/11 defendants on behalf of plaintiff April Gallop led to one of the most grotesque miscarriages of justice in American history. For details, listen to my 2011 interview with Veale.

William Pepper, who won a 1999 case proving the US Army, CIA, and FBI conspired to kill Dr. Martin Luther King, will be appearing tomorrow.

Listen to William Pepper describe his recent lunch with the Memphis PD officer who shot Dr. King – and explain how King survived the shooting but was murdered in the hospital by US government agents – on my radio show: William Pepper solves the murder of Martin Luther King Jr. – the government did it the media’s covering it up

Several conference speakers noted that young people are growing increasingly open to the truth about 9/11 and related topics. Dylan Avery of Loose Change, making his first 9/11 truth conference appearance since 2006, pointed out that this year’s class of entering high school students is the first one born into the post-9/11 world. Conference MC Mark Crispin Miller, a professor at New York University, added that his students are no longer afraid of the label “conspiracy theorist” since they get their news from the internet and are familiar with alternative perspectives.

Rather than attempt to summarize the entire proceedings, I urge readers to watch the Conference livestream beginning tomorrow, Sunday, September 11th, at 10 a.m. Eastern at NoLiesRadio.org. The entire event will later be archived at the same site.

Corrections: (1) Judge Imposimato has clarified that the ICC does not have jurisdiction over crimes committed before 2002. Therefore it could prosecute misprision, obstruction, etc. related to 9/11, but not 9/11 itself.  The Italian national courts, however, could prosecute 9/11 criminals of any nationality for offenses related to deaths and damages suffered by Italian citizens on 9/11, as could other nations’ courts. (2) William Veale’s case on behalf of April Gallop was actually against Bush’s Vice President Dick Cheney, Secretary of Defense Donald Rumsfeld, and Joint Chiefs of Staff Chair Richard Myers, but not against Bush himself.