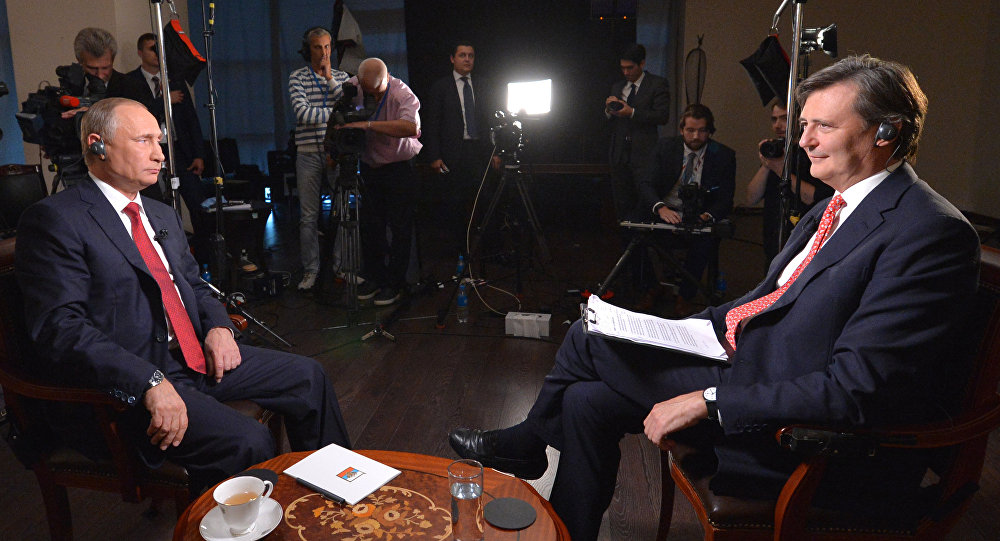 One ought to be a little surprised that the feminist movement hasn’t called John Micklethwait, editor-in-chief of Bloomberg News, a misogynist and a bigot for asking Vladimir Putin a provocative question about the presidential election. Micklethwait said:

“Back in 2011 you accused Hillary Clinton of seeking to trigger the protests that you were facing in Russia at the time. And by contrast when I look at some of the things that Donald Trump said about you back in 2007 that Putin is doing a great job…in 2011 he praised your no-nonsense way…

“You’re really telling me that if you have a choice between a woman who you think may have been trying to get rid of you and a man who seems to have this sort of great affection for you, almost bordering on the homoerotic … you’re not going to make a decision between those two?”

Aren’t the educational system in America basically putting young and impressionable students into laboratories for a massive sex and social experiment and for saying that there is a difference between a man and a woman?[2] Why didn’t the feminists chastise Micklethwait for not choosing his words carefully?

If terms such as maleness and femaleness are meaningless and worthless to feminists, why did they let Mickelthwait get away with it? Didn’t the State Department of Justice sue the state of North Carolina over its controversial law on transgender restroom use?[3] Didn’t the Atlantic tell us that “Mainstream understandings of ‘gender’ are changing”?[4] Didn’t they say that “Bigotry—fear or animus toward transgender people—is undoubtedly part of the outcry over bathrooms”?[5]

Why couldn’t Micklewait be gender neutral? Why did he have to explicitly say that Donald Trump is a man and Hillary Clinton a woman? Didn’t the Zionist Media lambast Putin for promoting family values and rejecting the sex culture in America and much of the West?[6]

In any event, Putin didn’t challenge Micklewait on that issue, which is understandable. He seemed to be using prudence when he declared:

“You know, I essentially already answered your question. I will reformulate it again in different words. We are ready to work with any president, of course. I also want to say that it depends on how ready the future administration is. If someone says that they want to work with Russia, we will welcome it…

“Here is the thing: I have seen several times that the anti-Russian cards are being played during domestic campaigns in the United States. I find this approach very short-sighted….We welcome the fact that somebody expresses readiness to work with Russia, whatever the name of that person…[America] deserves non-interference and no third-party comments.

“Answering your question for the third time, I can tell you that we will work with any administration and with any president in whom the American people have placed their trust. This is, of course, if they wish to cooperate with Russia.”

Does that sound like Russia is interested in disrupting the presidential election in America, as has been declared by political pundits like Hillary Clinton? This entire issue has really been somewhat entertaining over the past few days.

The Washington Post has declared that “U.S. intelligence and law enforcement agencies are investigating what they see as a broad covert Russian operation in the United States to sow public distrust.” But, the Post admitted, the “intelligence community is not saying it has ‘definitive proof’ of such tampering, or any Russian plans to do so.”[7]

If you were trained in logic and if illogical leaps drive you nuts, then perhaps it is time to grab your munchies, sit down for a while, and read the brazen assertion again. The intelligence community is freaking out because they think Russia seems to be operating a broad covert “operation in the United States to sow public distrust.” But the evidence? Well, there is no “definitive proof”! In fact, not a single and rigorous evidence has been presented thus far.

The intelligence community, which ought to produce serious evidence to back up serious accusations, is having nightmare because Russia is obviously not part of their political game. They have tried their best to demonize both the Russian and Syrian governments, but they have obviously been disappointed to realize that Putin and Assad are alive and well after all those years. It has gotten worse over the past few days for the Zionist Mafia.

The U.N. has recently accused the Syrian government for allegedly using chemical weapons in the war—again. But it seems to be clear by now that the so-called evidence, according to Robert Parry, was based on shaky foundations. In fact, UN teams were eventually convinced that the claimed was “staged.”[8]

We have a totally controlled operation here, and our presidential candidates are not ready to address the central issue at all. Hillary Clinton wants to blame Russia for just about any stupid thing she has ever done, and flaming Jewish Neoconservatives like Max Boot are ready to jump on her bandwagon.[9] 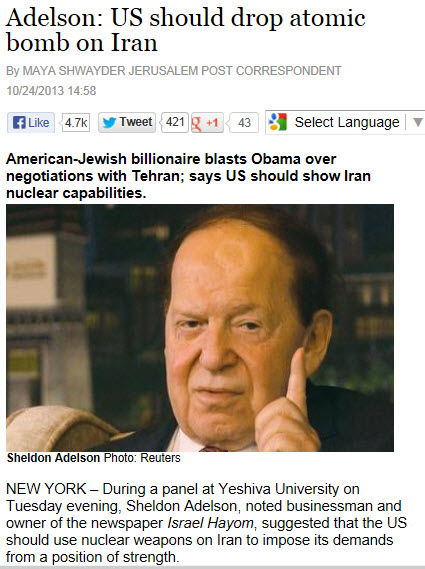 Then you have Trump who also is willing to say just about any stupid thing about countries like Iran. “Donald Trump said Friday night that he would shoot Iranian vessels ‘out of the water’ if they bother American ships.”

Presumably he does. But Trump has been ideologically handcuffed by Jewish oligarchs like Sheldon Adelson, who already promised him at least one hundred million dollars.[11] Adelson, if you remember, was the dude who advocated that America ought to drop atomic bombs on Iran.

If Hillary is really concerned about Putin rigging her presidential election, why hasn’t she said a word about her real boss, Haim Saban? As the Jewish Daily Forward itself put it last November, why does Hillary have a “Haim Saban problem”?[13]

[1] “The new guidelines require schools to allow transgender students to use the restroom and locker rooms that correspond to their chosen gender. And by invoking the sex discrimination law known as Title IX, the rules carry with them the threat of federal enforcement — including a loss of federal education funds.” Gregory Korte, “Transgender bathroom rule a matter of dignity, Obama says,” USA Today, May 16, 2016. See also Aamer Madhani, “Battle brewing over transgender bathroom laws in state capitals,” USA Today, February 29, 2016.

[2] One 17-year old responded to the transgender law by saying: “I think that it is endangering females by opening the doors for any man who wants to enter locker rooms and restrooms where females are. I am not saying that transgender people will be the ones committing crimes; however, these laws and orders will allow any guy who wants to enter these previously all-female spaces without being restricted by law.” NY Times, May 18, 2016.