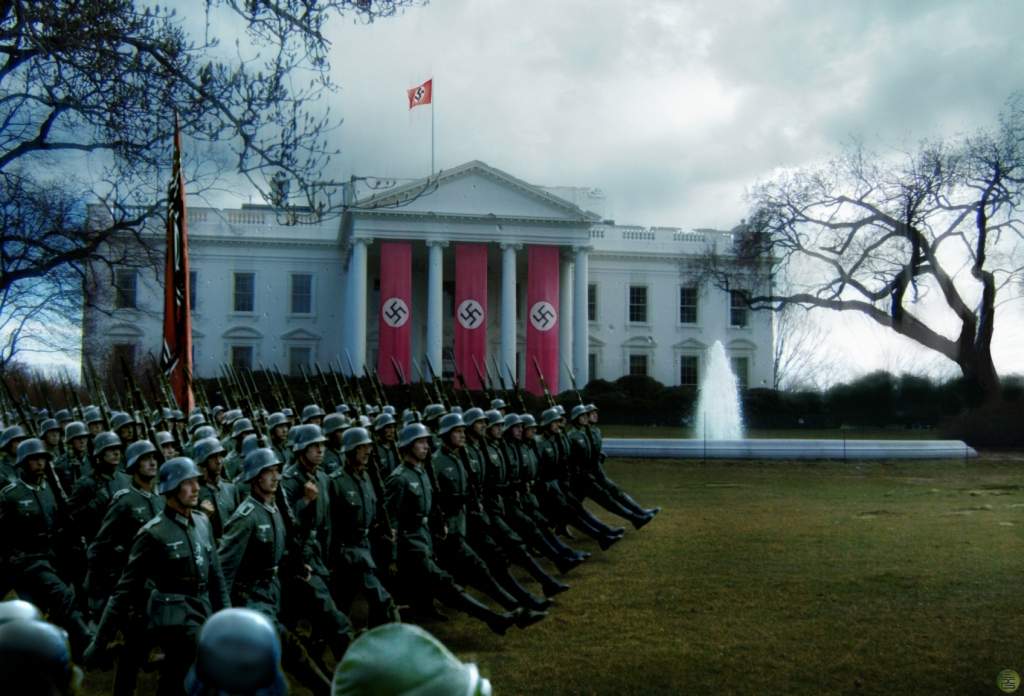 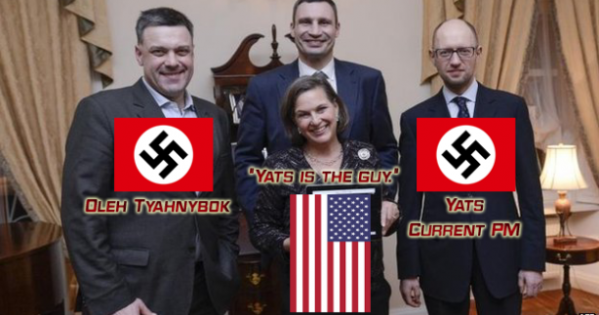 Are Americans prepared for this and are they fully aware of where their leadership is taking them? Or do they still believe that like the last century the whole world can go up in smoke and they will not only be unaffected but will make yet another huge profit into the bargain at everyone else’s expense with their own population and infrastructure still intact?

NATO has by degrees since the fall of the Soviet Union, increased Nuclear and ground troops along Russia’s borders. HERE is one of the many reports that have come out in the last two years.

Ukraine was the victim of a coup led by George Soros, Chevron, Monsanto and Victoria Nuland. The Maiden demonstrations were a “color revolution” backed by NGOs and Open Society Foundations, the purpose of which was to put NATO in Crimea and along the border of Ukraine within miles of Moscow. The US spent over $5 billion to overthrow the Ukrainian government and president.

Half of Ukraine is Russian speaking and lives in the east.

This resulted in Crimea having an internationally recognized referendum where the people, mostly Russian, voted to return to the Russian Federation which they have been part of since the time of Catherine the Great which was only annexed to Ukraine during the Soviet Union Era.

European politicians and peace keepers have since visited Crimea and have affirmed that the referendum was a democratic decision by the people and was above-board and not rigged.

At the same time a civil war has erupted between western Ukraine and eastern Ukraine. Kiev has continuously grad rocket shelled the east because Donetsk and Lugantsk do not recognize the current government which even the US intelligence agency Stratfor, has called “the most blatant coup in history.”

Over 1 million refugees fled Ukraine, not to Kiev or to Europe, but to Russia. Besides being doctors, lawyers, engineers and factory owners many of them were successful farmers from the renown fertile “black earth” region.

These farmers were relocated to eastern Russia, given land and subsidies for farming. As a result in spite of sanctions imposed since 2014, Russia has turned the situation around from being a food importer to a food exporter in the space of two years. GMO, genetically modified food is banned in Russia as well as poisonous herbicides.

In recent weeks we have seen the whole Russian team banned from the Paralympic games, sanctions extended against Russia and the Donbass region of eastern Ukraine for another six months and strangely enough, Typhoon Lionrock hit the Russian Far East after the powerful cyclone brought heavy rains on August 29-31, the east being an area where Russia is now heavily investing in a resurgence of the agricultural industry.

And on that score, you might want to give Italy, the Phillipines And Oklahoma get an Earthquake some thought.

During WW1 and WW2Jacob Schiff of the Federal Reserve funded Japan in their wars against Russia and China as well as Lenin and Trotsky. Bush, Ford, Rockefeller, Chase Manhattan Bank, J.P.Morgan, Harriman and a number of others funded Hitler and his blitzkrieg into eastern Europe and finally Stalingrad.

The United States of America was not openly attacking Russia and claimed to be in support of the “Allies.” They only entered the war when Stalingrad fell and the Russians did their own blitzkrieg to Berlin.

Americans wanted to get to Berlin first. Since WW2 US policy in Germany has been to keep the Russians out, the Germans down and the Americans in. Germany has the largest US military base outside of the US.

Which brings us to this: “Germany Prepares For Domestic Troop Deployments As “Catastrophic” Terrorist Attack Deemed “Conceivable, Even Probable”

Terrorists or…. a planned buildup under the guise of “terrorism” for a German, US, NATO attack on Russia? In April 2016 Obama Requested EU Support for Possible War Against Russia.

This time in WW3, unlike in WW1 and WW2, the United States is openly aggressive towards Russia as opposed to their proxy armies during the two previous world wars where they could claim “plausible deniability” as they are now doing with their support of Daesh in Syria and Iraq.

However, unlike the two previous world wars where the USA was protected by the Pacific and the Atlantic oceans from any attack on its own territory, should WW3 break out, this time the situation will be entirely different.

Russia has Boosted Arctic Military Presence with Ten Airfields, Alaska is only 86 kilometers away from Russia at the narrowest point and the US western sea board is within striking distance. Consider this article: How Russian And China Could Strike The US Airforce’s Achilles Heel.

“While often overlooked in favor of advanced anti-ship and surface-to-air missile systems when examining Russian and Chinese anti-access/area denial (A2/AD) capabilities, such long-range air intercept weapons—coupled with the right fighter—could cut the sinews that allow the United States to conduct sustained air operations in both the Asia-Pacific and the European theatres.

Especially over the vast reaches of the Pacific where airfields are few and far between, lumbering aerial refueling tankers could be an Achilles’ Heel that Beijing could chose to exploit. There are three long-range air-to-air missile programs that bear watching—the Russian Vympel R-37M RVV-BD, the Novator KS-172 (aka K-100) and the Chinese PL-15.”

In Putin’s recent Bloomberg interview he broke protocol and instead asked the journalist John Micklethwait a question:

“Vladimir Putin: Well, I would like to finish my answer to the previous question. You have been working as a journalist for a long time. You are quite knowledgeable and you understand all the threats that may arise from a tense international environment, don’t you? Especially if there is tension between major nuclear powers of the world. We all understand this.

Of course, you are the one asking me questions. It is you who is the interviewer, not I. However, let me ask you a question: do you want another Cuban Missile Crisis? Or don’t you?

John Micklethwait: No, nobody does.

Vladimir Putin: Of course, nobody does.”

This time there is no John Kennedy in the White House and no prospect of one in the near future, no matter what the American people think. But that is another can of worms and a dog and pony show rigged and designed as entertainment for the little people….

That is the thing you see… they are prepared to die. Are you? Or is this not part of your Hollywood reality, Batman Shooting, Boston Bombing and Sandy Hook “faked” disasters with crisis actors? Where does Rambo and George Clooney fit into the equation?

In a recent interview with the press Putin said :

“We know year by year what’s going to happen, and they know that we know. It’s only you that they tell tall tales to, and you buy it, and spread it to the citizens of your countries. You people in turn do not feel a sense of the impending danger – this is what worries me. How do you not understand that the world is being pulled in an irreversible direction? While they pretend that nothing is going on. I don’t know how to get through to you anymore.”

So again I ask:

Are Americans prepared for this and are they fully aware of where their leadership is taking them? Or do they still believe that like the last century the whole world can go up in smoke and they will not only be unaffected but will make yet another huge profit into the bargain at everyone else’s expense with their own population and infrastructure still intact?