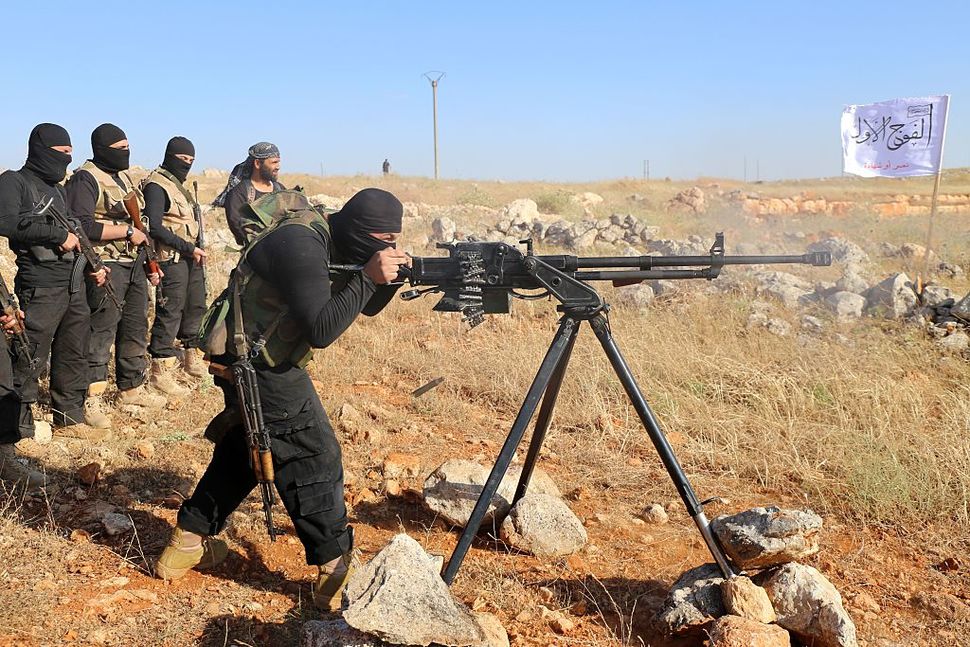 [ Editor’s  Note: I have sent a new article into NEO on the new ceasefire, with a title posing that we might finally be reaching the tipping point in the Syrian War, as it took a lot of coordination to pull this together; and none of the respective players were taking pot shots as the process dragged out.

That was a strong hint that an all-inclusive agenda had been promised for all those that were not classified as ceasefire wreckers. Even the Saudis and the High Negotiation Committee (HNC) had nothing to say before announcement.

This news today of the US special Syrian envoy’s letter counting heads of those confirming support for the ceasefire, and further, warning those who continue to mingle with the al-Nusra rebranded group would have to deal with “dire consequences”. That is as clear a bombing threat as I have seen by the US to its proxy groups.

I have to assume, in the five agreements signed between Russia and the US in this deal, that one of those specifically deals with identifying violators, and what punishment should be dealt out to those violating the ceasefire and then lying about it, claiming they had been attacked. Between Russia and the US, they have enough surveillance to know who breaks the agreement in the future.

That is why getting the Syrian Air Force to stay on the ground for now is important, because it eliminates the troublemakers shelling a hospital and deflecting blame onto Syrian Air Force activities. Everybody knows they have been doing that. This looks like what Lavrov and Kerry said they wanted — a deal that was workable… Jim W. Dean ] Washington has called on the Syrian armed opposition to stick to the milestone US-Russia deal, calling on militants to part ways with Al-Nusra or face repercussions, a letter written by the US special envoy to Syria said. It reportedly promised rebels a right to retaliate.

Addressing unspecified “armed Syrian opposition factions,”wrote that the US is awaiting a“confirmation” from rebels that they are “ready to commit” to the Friday agreement.

It hails the breakthrough deal struck by US and Russia on Friday as the “best way” to decrease the number of casualties. The letter, which is in Arabic, was seen by AFP and Reuters.

The ceasefire, which the deal implies must begin on September 12 and last for at least 7 days to hold, promises to be“more effective” than in similar agreements in the past, Ratney argued, commending a clause prohibiting Syrian air forces to conduct combat missions in certain areas controlled by opposition fighters.

If such raids, carried out either by Syrian or Russian planes, do take place, the rebels will be eligible to mount counter-attacks in self defense, said the letter, according to Reuters.

The diplomat also strongly cautions rebels against siding with Fateh al-Sham, the result of a recent Al-Nusra Front rebranding, adding that those who ignore the warning will have to deal with “dire consequences.”

While the separation of so-called moderate rebels from hardline militants like former Al-Nusra is considered to be one of the cornerstones of the deal, the reaction from a representative of the Turkey-backed Free Syrian Army (FSA), the leading rebel military force, suggests this task is hardly enforceable.

“Fateh al-Sham is a faction present on the ground and it takes part in most of the military operations, and the matter of separating it is not possible, particularly given that there are attempts to merge, within some factions, with Fateh al-Sham,” Fares al-Bayoush, commander of the FSA unit “Northern Division” said, as cited by Reuters.

Meanwhile, another FSA official, legal adviser Osama Abu Zeid, said that the implementation of an envisaged truce depends on the actions of the Syrian government, which, he claimed, violated previous ceasefires by attacking the“moderate opposition under the pretext of fighting Islamic State (IS, formerly ISIS/ISIL).”

Abu Zeid told RIA Novosti that the rebels are ready to uphold the deal on their end but there was no “optimism” about the ceasefire holding.

The Saudi-backed High Negotiations Committee, which represents over 30 opposition groups and individuals, welcomed the deal, with one member, Bassma Kodmani issuing a statement calling Russia’s ability to influence the Syrian government a key, on which its viability is dependent.

“We welcome the deal if it is going to be enforced. What if Russia doesn’t pressure the regime, because that is the only way get the regime to comply,” she wrote, adding that the group is “absolutely in favor of it [the deal]”

For its part, Syrian government has already committed to the demands of the deal.

“The Syrian government has approved the agreement, and a cessation of hostilities will begin in Aleppo for humanitarian reasons,” the country’s state-run SANA news agency reported on Saturday.

Russia has guaranteed the compliance of Syrian authorities with the terms of the agreement. Speaking at a press-conference after 14 hours of marathon talks on Friday, Russian FM Sergey Lavrov announced that Syria’s leadership“is ready” to implement the agreements in full.

While stressing that Russia, on its part, “will do everything which depends on us,” he pointed out that some parts of rebel forces have been refusing to cooperate in the peace process, instead disrupting Russia’s efforts to supply humanitarian aid to Aleppo by threatening its convoys.

“The convoy was ready to go on August 26. But the opposition said that any convoy going down the Castello highway will be shelled,”the Russian FM said.

Kerry also underscored the role of Russia in ensuring the truce, saying that Washington “is going extra mile” by agreeing on the deal as it believes that Russia has “the capability to press the Assad regime to stop this conflict and to come to the table and make peace.”