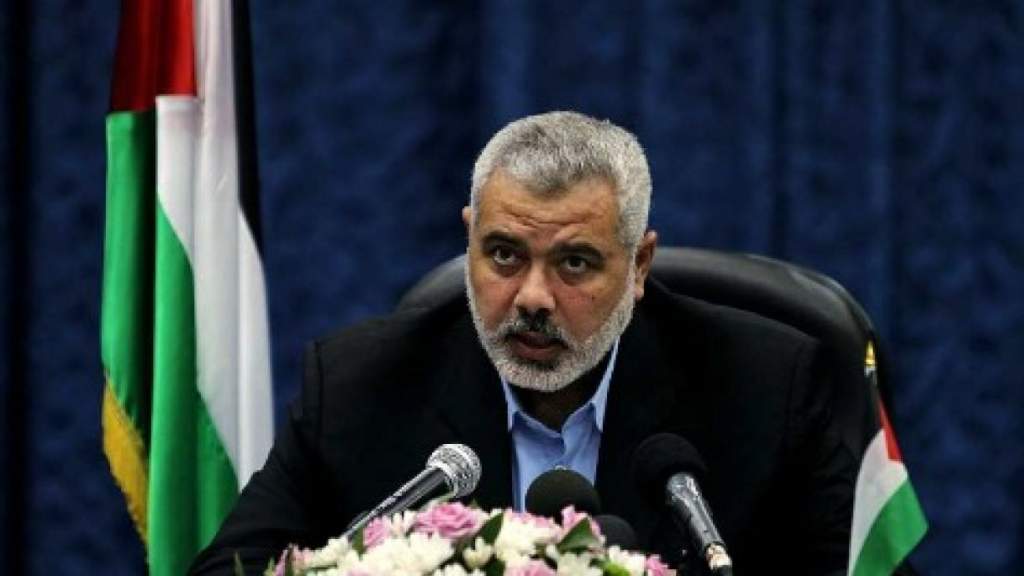 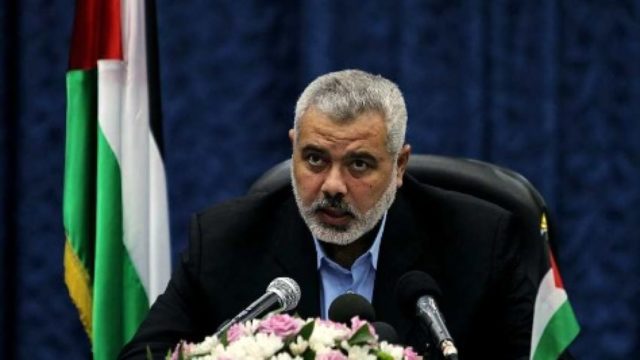 At least, that how I view the news that Hamas prime minister Ismail Haniyeh appears to have thrown his hat in the ring for chairman of the Hamas Political Bureau, a position held by Khaled Meshaal since 1996. To that end Haniyeh is reported to have left the Gaza Strip on Hajj to Saudi Arabia and may remain abroad until the election. The position of Hamas chief requires residency outside the Palestinian Territories to allow free movement and cut the risk of assassination by Israel.

Many Hamas leaders have had a tough upbringing in refugee camps and done time in Israeli jails or exile. But they have overcome… Ismail Haniyeh is a product of the refugee camp and was a leading figure in the student movement before graduating from the Islamic University and entering politics. Arrested three times by the Israelis, they deported him to South Lebanon in 1992. He became director of the office of Sheikh Yassin, a co-founder and the spiritual leader of Hamas who was assassinated by the Israelis in 2004.

Looking through the list of Hamas ministers after their election victory in 2006, I noticed that many had professional qualifications and were better equipped for office than their Western counterparts. Writing about this in 2009 I remarked that Hamas’s foreign minister, hardliner Mahmoud al-Zahar, brought up in Egypt, was a surgeon and headed the nursing department at the Islamic University.

He was deported along with Haniyeh to South Lebanon. Targeted for assassination, Al-Zahar’s home was bombed in 2003 by an Israeli F-16, murdering his eldest son and seriously injuring his wife. In 2008 an Israeli air raid killed a second son.

So Hamas clearly has a pool of talent that might have governed wisely and peacefully had they been given the chance after winning free and fair election in 2006. But the pro-Israel alliance went flat out to thwart this fledgling Arab democracy and crush it.

Re-writing the Charter Would Be Smart

Hamas’s popularity stems largely from its social, educational and healthcare programmes. Armed resistance to Israel’s illegal Occupation is of course their right. Meaningful negotiations, they say, will come only after Israel withdraws behind its internationally-recognized 1967 borders, as required by international law and UN resolutions.

The land of Palestine is regarded as an Islamic Waqf (trust) consecrated for future Muslim generations. It cannot be negotiated away by political leaders. Hamas therefore rejects peace moves that involve more territorial concessions.

In his 20 years as Hamas’s political chief, and 40 years in exile, it is hard to see what Meshaal has actually achieved for the Palestinian people. He seems to speak only to other Arabs and not Western politicians and activists, although in 2008 he met with US President Jimmy Carter and reached agreement that Hamas would accept the creation of a Palestinian state in the West Bank and Gaza Strip subject to it being ratified by the Palestinian people in a referendum. But even Carter couldn’t bring that one off.

Meshaal should long ago have rewritten the Hamas charter, especially where it says: “Israel will exist and will continue to exist until Islam will obliterate it, just as it obliterated others before it.” Admittedly it doesn’t state that a Hamas government is sworn to destroy Israel, but it includes a ‘hadith’ (reported saying of the Prophet) about killing Jews hiding behind rocks.

Such reports handed down from the 8th or 9th Century cannot be taken seriously today. And yes, the charter was written well before Hamas had pretensions to government. Nevertheless inflammatory language has no place in any mission statement of a modern ruling administration hoping to succeed in diplomacy. Hamas’s continued failure to remove it does them no credit and makes it easy for Israel and its allies to dismiss an otherwise legitimate resistance movement as terrorists.

Having said that, the charter is no worse than the outrageous mission statements of Israel’s political parties and racist laws. But why descend to their level? And while the regime in Tel Aviv continues, with impunity, to obliterate Palestine to clear the way for a Greater Israel, Western leaders require Hamas to disarm, renounce violence and accept Israel’s right to exist.

Palestinians of course elected Hamas to uphold their own rights to freedom and self-defence. And as Omar Abdul Razek, Hamas’s finance minister, said when interviewed by Aljazeera in May 2006: “Which Israel would you want me to recognize? Is it Israel from the Nile to the Euphrates? Israel with the occupied Golan Heights? Israel with East Jerusalem? Israel with the settlements? I challenge you to tell me where Israel’s borders lie.”

So is it reasonable to expect Hamas to renounce violence against a foreign power that violently occupies their homeland, bulldozes their houses at gun-point, uproots their beautiful olive groves at gun-point, sets up hundreds of armed checkpoints to disrupt normal life, batters down villagers’ front doors in the dead of night at gun-point, builds an illegal ‘separation’ wall to annex their lands, steal their water and isolate their communities, and blockades exports and imports to cause economic ruin?

The Palestinians had no history of violence until their country was partitioned by the UN and overrun by a brutal intruder whose greed is never satisfied. Demands for Palestinians to cease their terror campaign cannot be taken seriously unless linked to demands for Israel to do the same.

Israel’s demolition of thousands of Palestinian homes for so-called administrative and planning reasons, the wholesale destruction of businesses and infrastructure, the excessive violence against non-combatants, the abductions, imprisonments and assassinations, and especially the programme of blitzkriegs on Gaza slaughtering thousands including many hundreds of children, wounding or maiming tens of thousands and reducing the whole place to rubble… none of these crimes can be justified on grounds of defence or security.

They are so disproportionate as to constitute grave violations of human rights and possibly war crimes; and they add up to terrorism even in Netanyahu’s language. His book ‘Terrorism: How the West Can Win’ defines terror as the “deliberate and systematic murder, maiming and menacing of the innocent to inspire fear for political ends”.

In an interview with Jennifer Byrne in February 2002, Netanyahu spectacularly shot himself in the foot again: “Terrorism is defined by one thing and one thing alone, the nature of the act. It is the deliberate systematic assault on civilians that defines terrorism.”

Hamas must do better

The burden of leadership in Gaza has fallen not on Meshaal but Haniyeh who has operated under the constant bombardment and other horrors inflicted by Israel on that overcrowded strip of land. In 2006, within days of being elected, he offered long-term peace if Israel recognized Palestine as an independent state on 1967 borders.

Previously the PLO (Palestine Liberation Organisation, which officially represents all Palestinians) had “recognized” Israel without requiring any reciprocity by Israel. The Oslo Accords were supposed to end the Occupation and give Palestinians independence, but all they got was “more settlements, more occupation, more roadblocks, more poverty and more repression”.

Hamas’s win at the polls was not only unexpected, it was highly inconvenient to Israel’s plans and the West’s designs on the Middle East. Obstruction was their immediate response. And when Hamas finally ejected bad losers Fatah from Gaza to secure their right to rule at least that tiny coastal enclave, the blockade was cruelly tightened.

In late 2007 I was lucky enough to be with a small group that met Ismail Haniyeh and some of his senior colleagues in Gaza City. It was useful to have such a close-up view of the man in those early days of Gaza’s siege, which has now lasted 10 years (and still counting) while the international community stands idly by. Ordinary men would have crumbled. But not these Palestinians. They are forged in the white heat of resolute resistance.

At the other end of Palestine’s political spectrum, in the West Bank, sits wobbly Mahmoud Abbas, boss of Fatah, whose term as president of the Palestinian National Authority (and now the nebulous State of Palestine) officially ended in 2009. His election in the first place was farcical and probably illegal, and he has overstayed his welcome by 7 years, his backside super-glued to the presidential throne.

Elections have just been postponed, thanks most probably to backroom deals preventing Abbas losing his grip and thus his position as the West’s useful idiot. Let us not forget that the rest of the Palestinian Territory (West Bank and East Jerusalem including the Old City) is also under permanent blockade, nothing and no-one can come or go unless Israel says so, and the people are caged within Israel’s evil Matrix of Control and subject to arrest and imprisonment without trial. Abbas’s people do much of Israel’s dirty work.

Meshaal’s successor needs to do a much, much better job. Why do I feel optimistic at the prospect of Haniyeh taking charge and roaming free? He struck me as an approachable man and not without charm, yet a hard-boiled patriot; also a moderate in Islamic terms and respectful of the Christian community in Hamas’s midst. After our meeting he told the cameras: “We are Palestinians first, and Christians and Muslims second. We face a common enemy together.”

He has a reputation for being pragmatic. If that’s the case he will waste no time in turning Hamas’s charter into a document fit for purpose in the 21st Century. He might go further with reform and open proper communication channels to the West. Palestinians have truth and justice on their side. Their story must be told with greater energy, amplification and persuasion. Rivals Fatah, who control the Palestinian Authority and PLO, fail miserably in this duty as in so many others.

How will the West receive Haniyeh if he takes the job? In a saner world he’d most probably be welcomed as a hero into the diplomatic drawing rooms of London, Washington, Paris and Berlin.