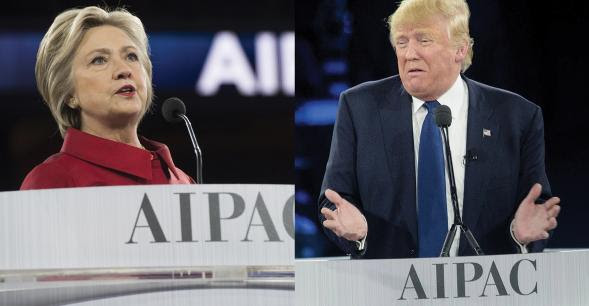 The media does not want to address the elephant in the room, or in this case, in the US presidential election. That elephant is the Jewish state of Israel and the subservience of both the Democratic and the Republican candidates to Israel. It appears the media rejects Aristotle’s call to, “Let us first understand the facts, and then we may seek the cause.”

Republican US presidential hopeful Donald Trump said, “And we’re going to take great care of Israel. We’re going to cherish and protect Israel.” The Republican Party Platform was amended to drop the decades old language calling for a two-state solution to the Israel/Palestine question.

One of the key people who made the platform even more pro-Israel than it ever was before and even more pro-Israel than the Democratic Party Platform was Jeff Ballabon, a Jewish media leader. Ballabon has said regarding Israel’s cruel and illegal occupation of Palestine, “The false notion that the Jewish state is an occupier is an anti-Semitic attack on Israel’s legitimacy.” It’s amazing how fearful Gentile people are of being called anti-Semitic;

At first glance, it’s amazing that the media doesn’t cover extensively why the two leading candidates in the presidential race are fighting to outdo each other in putting the interests of a foreign nation ahead of the interests of Americans and America. This is a huge elephant in the room!!

At second glance and a more objective look at the media, it becomes apparent why the media refuses to address the elephant in the room, which is the Jewish state of Israel. The media and Hollywood are dominated by Jews who love the Jewish nation of Israel and who would never do anything that may harm Israel’s chances of becoming what their Hebrew Bible/Old Testament claims God promised Israel would become: the ruler of the world.

The American founder and Deist, Thomas Paine, wrote in The Age of Reason that we need a revolution in religion based on our innate God-given reason and Deism (Deism is belief in God based on the application of our reason on the laws and designs in Nature). This will do much to free our minds from the grip of the Abrahamic “revealed”/hearsay religions as well as from the Bible promoted Jewish state of Israel.