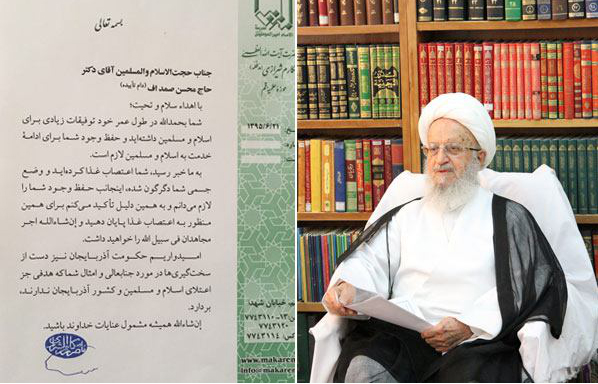 Ayatollah Makarem Shirazi, Shia source of emulation, wrote a letter to Dr. Movsum Semedov who began a hunger strike to protest the actions of the Azerbaijani government. Makarem wanted him to end his hunger strike.

Movsum Semedov, the leader of Islamic Party, was born in Quba City of Republic of Azerbaijan in 1965. He graduated from Baku University of Medical Sciences in the Doctor of Medicine.

In 1992 since the early days of the Islamic Party, Semedov became a member of the party and took responsibility of the Office Party. He studied religious education for many years in the most prestigious religious centers. And after his return, he continued his religious activities in Azerbaijan. Finally in 2007, he was elected as the president of the Islamic party with overwhelming majority of member in the sixth meeting.

In the January 2011, Movsum Semedov was arrested as a result of harsh criticism to Baku’s Islam phobia policy and after 9 month of political controversy was sentenced to 12 years in prison.

Yesterday, one of the Shia clerics of Islamic Republic of Iran sent the following massage:

In the Name of God

We heard that you’ve conducted a hunger strike and your physical condition has changed. I consider your existence necessary for us so I emphasize to end the hunger strike. You will be rewarded as the warriors for the sake of Allah.

I hope that Azerbaijani government takes it easier on you and people like you the one who hasn’t purpose other than the advancement of Islam, Muslims and Azerbaijan.

God willing you will always be under the blessings of God.

Benjamin Netanyahu, Israeli Prime Minister, have praised the Hajj program by Saudi government “worship and civilized behavior” with the slogan “Hajj message of peace” in an interview with “Times of Israel “.Netanyahu said:” this practical step will improve global peace between Islam and other religions, particularly the Jewish. Peace between Israel and the Arabs will be realized soon.

“We don’t hide how pleased we are about absence of Iranian pilgrims in the Islamic Hajj. We are sure that Iran is the main obstacle to peace in the Middle East over the past few decades,” he added.

In the end Netanyahu referred to the clear outstanding disputes and the possibility of resolving the conflict between Israel and Saudi Arabia by Saudi’s new policy, added:” Hajj is the way of worship and a civilized behavior and should not be tainted with political slogans and sectarianism.”