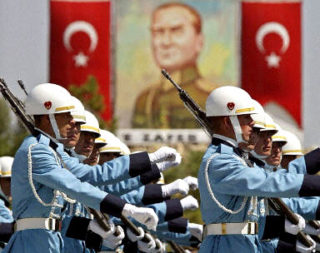 [ Editor’s Note: The US continues to fumble Turkish relations, building even more support for the Erdogan regime when it defends Turkish pride against the Western bullies. But Turkey is making a fool of itself in the process as its whining is all crocodile tears.

Turkish Intelligence has massive surveillance on its citizens, as do most countries that have the ability to do so. Cavusoglu’s asking us to believe that these 28 PKK-loving governors were just discovered is very funny. I would ask why, after years of watching them closely, they are all discovered at once. Was it to make a big show of it? I think so.

This constant demanding for Gulen’s being turned over is a side show. You notice the Turks never use the term extradited. They don’t even want to mention for the Turkish public that there is a formal legal process that all extradition targets are entitled to, including Turkish ones in the US.

And when it comes to getting into another country’s business, I would remind Mr. Cavusoglu that demanding that Syria’s elected leader step down to suit Turkish foreign policy is the pot calling the kettle black. He’s being a hypocrite, which by no means is a rare thing in diplomacy, and neither are untruthful statements.

Turkey may be filled with idiots who believe this childish banter, but the rest of the world is a bit more grown up. Running a country is different than thinking you are in a “Dancing with the Stars” contest. People’s livelihoods are at stake, including the Kurds that Turkey is killing in Syria without their day in court.

Dear Mr. Cavusoglu, what if the rest of us thought that killing Turks inside Turkey who we considered terrorists, including political terrorists, was a cool thing to do, and we cited your example as justification? What would you say then, other than the Israeli excuse that the rules don’t apply to us because…you know…we are “superior”… Jim W. Dean ]

Turkey’s foreign minister has censured the latest remarks by the US ambassador to Ankara concerning suspension of dozens of mayors over alleged links to the Kurdistan Workers’ Party (PKK), arguing that he is not in charge as a governor in Turkey.

“Some statements make us sad, especially when we are fighting terrorism. No elected official can be spared if they are aiding terrorists,” Mevlut Cavusoglu said in the southern Turkish resort city of Antalya on Tuesday.

He was reacting to a statement by US Ambassador to Ankara John Bass on September 11, in which he voiced concern over the Turkish government’s decision to relieve 28 governors of their posts, calling for early local elections as soon as possible.

Cavusoglu further complained that “the Americans feel entitled to say anything.”

“None of you are the bosses of Turkey … If you want to have a strong relationship with Turkey, you need to view Turkey as an equal partner. It is not a second-class country,” Cavusoglu said.

“Your diplomats are not governors in Turkey. They should do their jobs properly within the framework of the Vienna Convention on Diplomatic Relations,” the Turkish foreign minister added.

Cavusoglu also reiterated that Ankara has officially requested Washington to hand over US-based opposition leader Fethullah Gulen, whom Turkish officials accuse of being behind the failed July 15 coup attempt.

“Gulen should be extradited to face trial. All those who have fled abroad are linked to the failed coup, and have to be held accountable at last,” he stated.

Additionally, president of the far-right Nationalist Movement Party (MHP) has slammed US John Bass’s comments, saying Turkey is not a state of the United States.

“The US ambassador is exceeding his limits. He is disrespectful and hurling insults at Turkey. But Turkey is not a state of the United States. Turkey is an independent state,” Devlet Bahceli said.

Meanwhile, President Recep Tayyip Erdogan has defended his decision for the suspensions. He said those who misuse their executive power in support of terrorism are not “mayors in the real sense of word.”

“Being elected does not give anyone the right and authority to offer given resources to terrorist organizations,” Erdogan pointed out.

In a similar move days earlier, Ankara suspended about 11,500 teachers over suspected links to the PKK.

The Anadolu state news agency said the Education Ministry suspected that the teachers had been involved in activities “in support of the separatist terrorist organization and its affiliates,” in an apparent reference to the PKK.