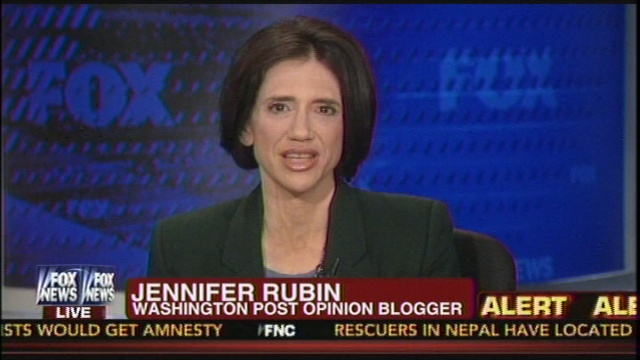 Flaming Jewish Neocon Jennifer Rubin has recently taken the cat out of the bag by saying that Russia is moving forward and there is not a damn thing the US can do about that. The US, says Rubin, is utterly powerless in this regard.

Rubin cites John Hannah, the Foundation for Defense of Democracies and the person who has served in multiple administrations, saying:

“Across the eastern Mediterranean and Levant, through Turkey, Iran, and the broader Gulf region, the trend line is obvious to anyone with eyes to see it: Russia’s star is waxing while America’s wanes. In strategic theaters where successive generations of U.S. statesmen have consistently maintained that American military dominance is essential, a resurgent Russia increasingly poses challenges.

“Slowly but surely, Washington’s freedom of action is being constricted. And as sure as night follows day, Russia’s successful flexing of military power has led to the rapid expansion of its political clout as well. And not just among America’s adversaries. From Israel to Saudi Arabia, from Egypt to Turkey, traditional U.S. partners are also increasingly compelled to curry favor with Moscow.”[1]

Rubin and Hannah could never bring themselves to the fact that Russia is moving forward and attacking some of the central tenets of the New World Order because virtually no Western nation is willing to challenge New World Order Agents in the Middle East. These people do not want to recognize that the Neoconservative ideology is one of the main reasons for so many problems in the Middle East.

Rubin admits: “Things are bad now, but they could get much, much worse for ourselves and our European and Middle East allies.”

Well, I’m glad things are bad for those people because they have created literal chaos in Middle East. I’m glad that Russia is telling them that destroying sovereign governments in the Middle East at will is over.

The name of Rubin’s article is: “Who will stop Putin?” Perhaps Rubin needs to pick up a copy of Friedrich Hegel’s Lectures on the Philosophy of World History and realize that a system that is built on lies and fabrications cannot triumph forever. Rubin is part of the New World Order, and she is mad and sad because the system has been under attack by none other than a small but significant country called Russia.

If NWO agents like Rubin want to stop Russia, then they to start following the moral and political order. Putin indeed has made numerous references to that order over the past four years or so. Rubin needs to start listening.