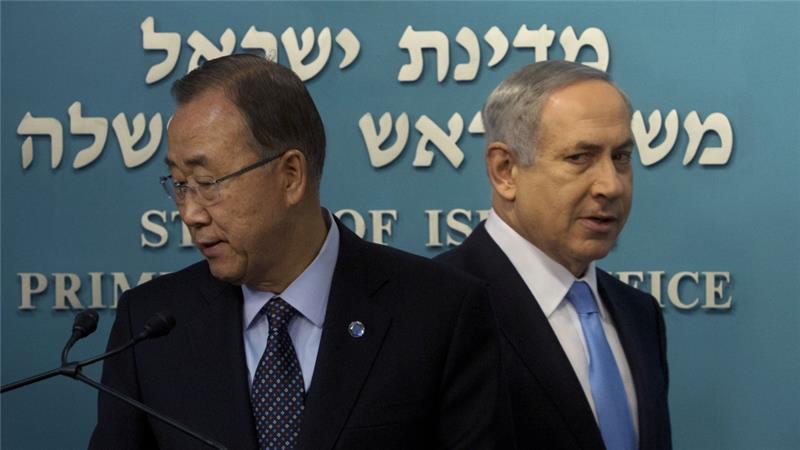 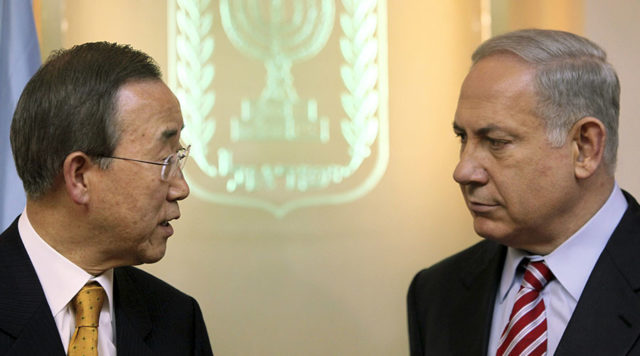 [ Editor’s Note: My my, Bibi gets a very public spanking in front of the Security Council by Ban Ki-moon. One could say that the Secretary General was wanting to get a few good licks in while he still has the position. But actually, I think Bibi brought it on himself.

His statement of how a Palestinian state could be viewed as an “ethnic cleansing” of Jews in the West Bank. Ouch! Some knucklehead at a staff meeting dreamed that up and Bibi was stupid enough to actually say it. So I think the SG was just using the bully pulpit to rub that in, not that the Likud crowd could care less.

But such statements from the head of the UN before its big fall meeting sets a tone for maybe some surprises at Ban Ki-moon’s last big New York meeting. Bibi is so unpopular that he spoke to a half empty room last year, where he just leered at the crowd there that he knew hated him, and why.

Obama did not do much better with his rolling over on the $38 billion in aid to Israel, which throws away the US’ main financial leverage to wound the Likud party and have any chance of advancing Palestinian peace. It makes America look weak, like a country run by a bunch of Israeli Lobby bootlickers.

When I heard of Shimon Peres’ stroke, the first thing I thought of was “why not Bibi?”, and no, I am not embarrassed to say it, and no, I will not apologize. But then, I thought of über-Arab hater Avgidor Leiberman maybe getting the PM slot and changed my mind. Bibi is the lesser of two evils there, for sure… Jim W. Dean ]

On Thursday, Ban told the Security Council during a meeting on the Israeli-Palestinian conflict that Israel’s construction of settlement outposts on land earmarked for a future independent Palestinian state is illegal, and the Israeli military’s control over Palestinian territories must be brought to an end.

“Let me be absolutely clear: settlements are illegal under international law. The occupation, stifling and oppressive, must end,” he said.

The UN chief further noted that the settlement of around a million Israelis in Palestinian territories is “diametrically opposed to the creation of a Palestinian state.” Ban further took a swipe at Netanyahu over assertion that opposition to settlements was tantamount to “ethnic cleansing.”

“I am disturbed by a recent statement by Israel’s prime minister portraying those who oppose settlement expansion as supporters of ethnic cleansing. This is unacceptable and outrageous,” the UN secretary general pointed out.

Last week, Netanyahu claimed in a video posted on his Facebook page that the settlements built across the occupied West Bank do not constitute “obstacles” to an eventual peace agreement with the Palestinians, and that he has “always been perplexed” about the related criticisms.

The Israeli prime minister went on to allege that the Palestinian leadership sought a Palestinian state on the condition that it was “a state without Jews,” and that this could be described as “ethnic cleansing.”

Speaking on Sunday night before the Eid al-Adha (Feast of Sacrifice), Palestinian President Mahmoud Abbas (seen below) said the Israelis “don’t want to progress one iota towards peace, in spite of their deceptive allegations.”

“On the contrary, they go deeper with their settlements, infringement of holy places, ethnic cleansing and deliberate killing,” he said.

Palestinians want the West Bank as part of their future independent state, with East Jerusalem al-Quds as its capital. The presence and continued expansion of illegal Israeli settlements in occupied Palestine, however, have created a major obstacle to the establishment of such a state.

More than half a million Israelis live in over 230 settlements built since the 1967 Israeli occupation of the Palestinian territories of the West Bank and East Jerusalem al-Quds.

Much of the international community regards the Israeli settlements as illegal because the territories they are built on were captured by Israel in a war in 1967 and are hence subject to the Geneva Conventions, which forbid construction on occupied lands.

Nevertheless, the Israeli regime continues to build more settlements and expand the existing ones.