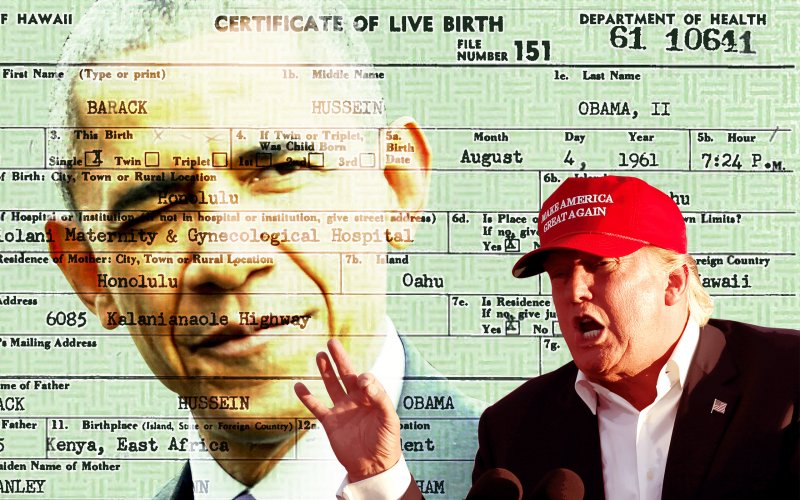 For weeks Trump surrogates including faux Dr. Rudy Guiliani and his very capable but overworked latest campaign manager Kellyanne Conway have been in spin mode on TV claiming Birther Trump now believes Obama was born in the USA.   Reports from the inside of Birther Trump campaign say Kellyanne and Dr. Rudy have been putting pressure on Birther Trump to drop his claims because his 5 year de-legitimize the black guy effort has negatively affected the African and Hispanic American voters he so desperately needs to actually win enough electoral votes to win the the prize.  And actually, they are right!  If Birther Trump cannot get enough of the real 21st century America to vote for him, he’ll end up President of the 20th Century David Duke Nation of the KKK.

So today, on cue, Birther Donald Trump finally conceded and capitulated that President Barack Obama was born in the United States.  Yes!  But he also did it while also falsely blaming Democratic nominee Hillary Clinton for starting rumors about the president’s citizenship.  He said;

“Hillary Clinton and her campaign of 2008 started the birther controversy. I finished it, I finished it. You know what I mean. President Barack Obama was born in the United States, period. Now we all want to get back to making America strong and great again,”

This capitulation came just one day after Birther Trump refused to say to the Washington Post that President Barack Obama was born in the United States.  So it must have been a last minute decision. I can imagine poor Kellyanne up all night yelling at him and pulling his teeth or was it his hair?  I think Fallon did that right?  Um!  Whatever!

Anyways today’s Birther Trump Event was held his “brand new huge beautiful” hotel in Washington, D.C. where he made the strangely timed capitulation.

But first, lets get this straight up!  Trump was wrong!  He lied again!  Hillary Clinton did not start the birther argument.  She never said it.

But how typical of Birther Trump right?  Did you really expect any less from this lovely person?  I mean Birther Trump simply cannot apologize when he was wrong.  The best that he can do is spin and blame others.  But we all know that!  He has an extremely long history of this irresponsible behavior.  He does it over and over and over again; so much so that we can now call it his Motis Operandi; his M.O. 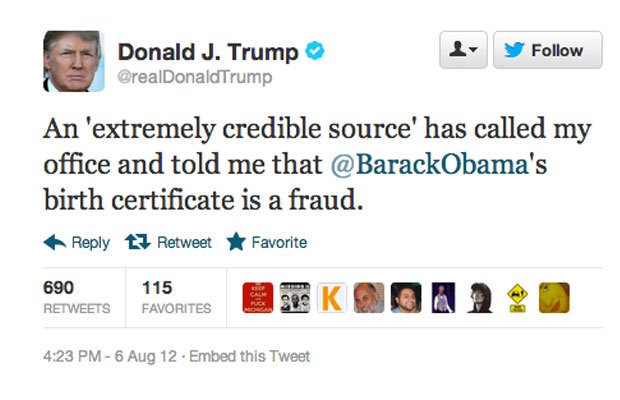 I mean for 5 years Birther Trump doubled and tripled down on birtherism.  He egged on vulnerable white Americans who genuinely had a truly sickening feeling when the new USA elected a black man to lead the national tribe.   It was a real thing for them!  Its nothing to laugh at!  They really feel this pain!

Call it whatever your want!  Call it racism, not racism, tribalism….whatever!  The truth was that Birther Trump used these vulnerable people to get up the political ladder as he squarely aimed to de-legitimize our first African American President giving the vulnerable a place to call home; their birther home!  And it worked!  That’s how we got her folks!  He may be a rude Cicero-esque predator who has zero compassion for anyone who gets in his ambitious way but he is effective.  That is a fact!

Nevertheless, Birther Trump gifted us years and years of direct and indirect inferences that President Obama was not a legitimate American.  It was a terrible ugly mirror to shine on us.  It exposed the worst in our national fears and genuine weakness.

But today let us rejoice because this may be as close to an apology  that we will ever see from the habitually unapologetic and vicious Birther Trump.  I mean in typical ugly Birther Trump fashion, in his statement today he appeared to take credit for solving the birther question instead of saying he was wrong.  Bizarre right?  I know! So weird!  This guy takes the cake!

Of course, in his amazing brilliant mind, he would be the only one in the USA with a brain big enough to solve the “where was Obama born” question right?   He even claimed to hire 5 amazing invisible and no where to be found investigators and sent them around the world like Indiana Jones looking for Flux Capacitor; or was it the Temple of Doom or Lost Ark?  Well, you know what I mean. 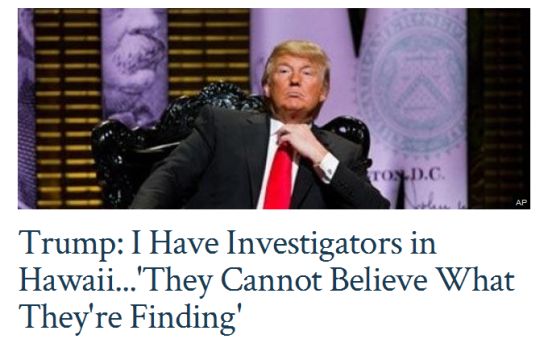 Anyways, you mean to tell me the C.I.A, N.S.A, and F.B.I. could never figure out where Obama was born?  They never had a clue?  You mean only Birther Trump and his amazing invisible investigators that don’t exist were the only ones who could find out the truth?  Wow!

I mean thank god we have Birther Trump because without him where would we be right now?   Opps!  Wait!  Um, that’s a great question!  Maybe he should just go back to his Birther Tower and leave us all alone because enduring this crap for 5 years was irresponsible at best and truly Anti-American evil at the very worst.   In short, what total complete and utter bull shit! 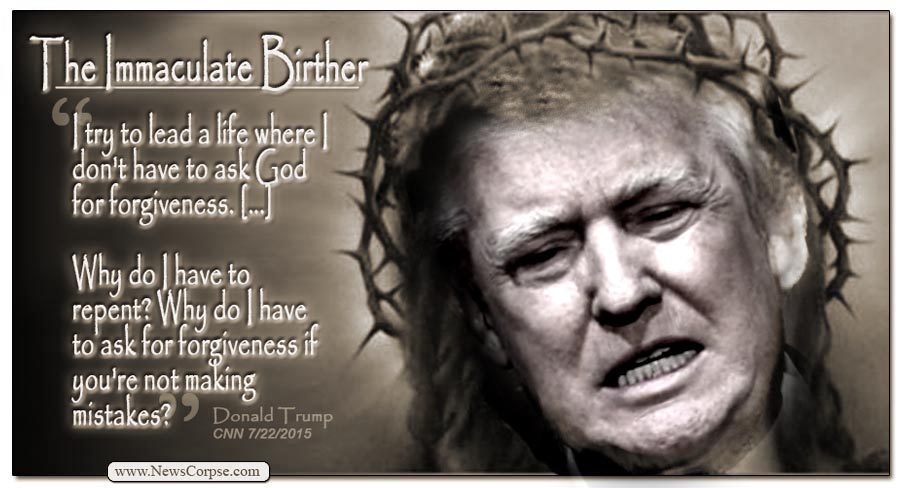 OK, so you gotta feel for the Trumpbots; especially the deplorable wing!  I mean how they gonna spin their Trump Ghandi Savior when he just pulled the rug out from under their feet? They were invested in birtherism.  They want to see Birther Trump enter the White House and handcuff President Obama and his monkey wife to the Lincoln Bed Post and put a noose around their necks.  Now what do they have to look forward to?

I mean what’s next now?  And how far with Birther Trump go in throwing his deplorable base under the bus?

I mean will Birther Trump invite Indiana born U.S. Federal Judge Gonzalo Curiel for tacos and beer and claim he was just kidding for trying to out him as a Mexican while claiming Hillary is Mexican and therefore its’ her fault the judge was born in Indiana and NOT Guadalajara?

Or better yet, will Birther Trump “apologize” to Gold Star Mother Khan for being an insensitive jerk-off?

I mean how far will Birther Trump go in the next 50 plus days before we all go to the polls and give him the ultimate social and political judgement?  Will he stick the nail into the coffin of the his deplorable wing spin himself into a decent human being?  Or will he plow ahead, ignore all the flack, and just hope it all goes away?

Stay tuned folks cause the next 50 plus days are going to get uglier and uglier!