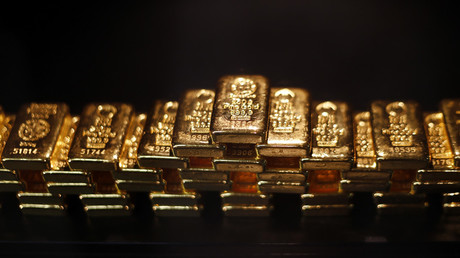 “Deutsche Bank has no intent to settle these potential civil claims anywhere near the number cited. The negotiations are only just beginning. The bank expects that they will lead to an outcome similar to those of peer banks which have settled at materially lower amounts,”Deutsche Bank said in a statement on Friday.

The Wall Street Journal reported the DoJ is demanding $14 billion in compensation to settle a set of high-profile mortgage-securities probes stemming from the financial crisis.

The bank’s spokesman confirmed in July settlement negotiations were underway, but the size of the potential penalty was unknown before today.

The amount is almost equal to Deutsche’s market cap. As a result, the share price of the German bank plummeted over eight percent on Friday, dragging the country’s stock market half a percent lower. Friday’s slump added to the 45 percent drop in the bank’s stock since January and a 53 percent slump over the last twelve months.

Bank of America paid $17 billion to settle a similar probe in 2014. Goldman Sachs agreed to reimburse $5.1 billion earlier this year over troubles with mortgage-backed securities that were sold to investors as high-quality debt.

In 2014, the DoJ demanded Citigroup pay $12 billion for selling low-grade mortgage-backed securities, but the fine was cut to $7 billion.

Barclays, Credit Suisse Group, UBS and Royal Bank of Scotland face similar investigations and could also be penalized by US authorities.