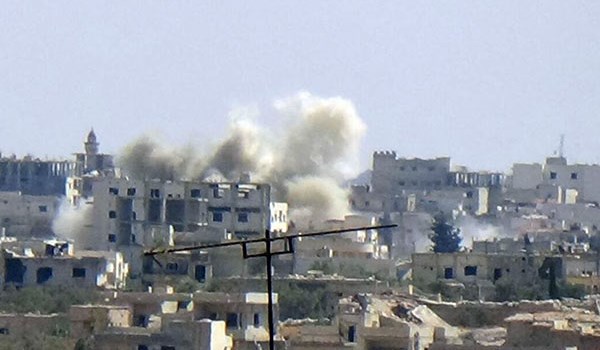 A shameful and cowardly act by the US Air Force, a day of national disgrace

[Editor’s note: Syrian officials including the Minister of Justice, Najem Hamad Al-Ahmad, told VT that US planes launched from Iraq, including A10 and F16s, attacked Syrian Army positions near the Der Ezzor airport, killing 80 and wounding up to 100.

Russian Ministry of Defense officials have confirmed the story, a massive violation of the cease fire.  The attack was followed up by an ISIS ground offensive showing clear signs of coordination and a strong likelihood that US Army Special Forces are on the ground coordinating air cover with ISIS deep inside Syria. G]

TEHRAN (FNA)- The General Command of the Syrian army said the US-led coalition has bombed the Syrian army positions in Deir Ezzur, killing some 80 soldiers and injuring dozens more. According to Syria’s official SANA news agency, the bombing took place on al-Tharda Mountain in the region of Deir ez-Zor and caused casualties and destruction on the ground.

The Russian Defense Ministry said on Saturday that the aircraft which carried out the bombings had entered Syrian airspace from the territory of Iraq. Four strikes against Syrian positions was performed by two F-16 jet fighters and two A-10 support aircraft, it added.

Even if the bombardment of the Syrian government troops was a mistake, it’s still a consequence of Washington’s unwillingness to coordinate its anti-terror efforts with Moscow, the ministry said.

The Defense Ministry also confirmed a report by SANA that an ISIL offensive began right after Syrian Army positions were hit from the air. The actions of the coalition “clearly paved the way for ISIL terrorists to attack the position and take control of it,” the agency said citing the General Command of the Army and Armed Forces.

The General Command has called the bombing a “serious and blatant aggression” against Syrian forces, and said it was “conclusive evidence” that the US and its allies support ISIL terrorist group. Earlier on Saturday, Russia accused the US of being reluctant to take measures to force rebels under its control to fall in line with the terms of the Syrian ceasefire.

Numerous Russian appeals to the American side remain unanswered, which “raises doubts over the US’s ability to influence opposition groups under their control and their willingness to further ensure the implementation of the Geneva agreements,” senior Russian General Staff official, Viktor Poznikhir, said.

Poznikhir also said that the truce is being used by the militants to regroup, resupply and prepare an offensive against government troops. Last week, Moscow and Washington agreed to influence the Syrian government and the so-called moderate rebel forces respectively in order to establish a ceasefire in the country.

Since then, Russia has repeatedly complained that the US is failing to keep its part of the bargain. The US, on its part, has blamed Russia for not pressuring Damascus enough to facilitate humanitarian access to Syria.

As a result of the attack, 62 Syrian soldiers were killed and some 100 others were injured, according to information received from the Syrian command in Deir Ezzur, he said.

The Russian Defense Ministry said that Daesh terrorists launched an offensive soon after the US-led coalition aircraft attacked the Syrian government forces. “Even if this airstrike has been carried out due to an error in the coordinates of the target, it is still a direct consequence of US side’s unwillingless to coordinate its actions against terrorist groups with Russia,” the Russian Defense Ministry spokesman emphasized.

Konashenkov said that fighting with terrorists has been taking place near the Deir Ezzur airport.

The news comes amid a ceasefire in Syria agreed by Russian Foreign Minister Sergey Lavrov and US Secretary of State John Kerry on September 9. The ceasefire stipulated by the US-Russia agreement came into force on September 12.

(Note: Later reports by the Syrian army on Saturday night said the death toll of the US-led coalition airstrike increased to 80.)