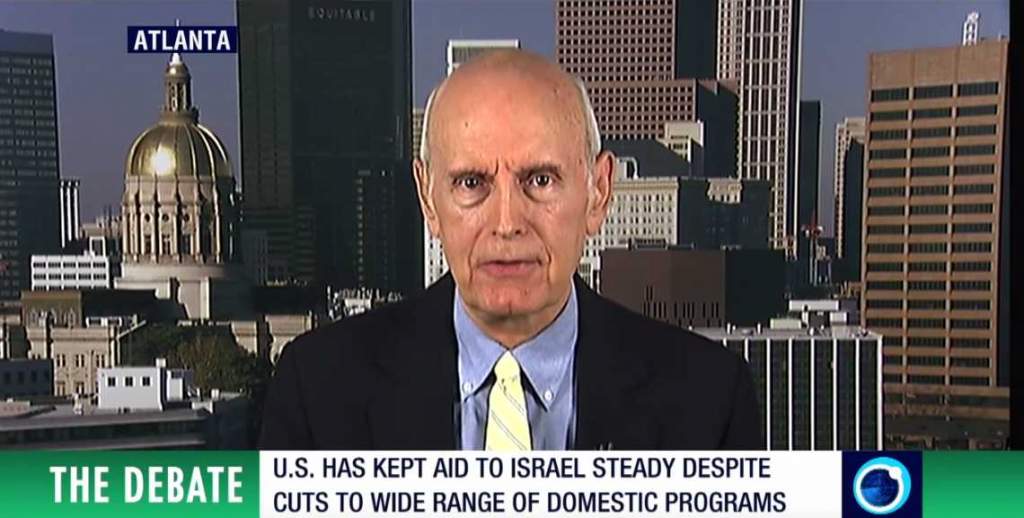 [ Note: I enjoy having Larry Korb as a co-guest on a Debate Show as he is always well prepared, and despite our different views he never panders with old worn out Israeli propaganda. I think he got briefed a bit for this show, on his position that Israel “probably” had all its nukes before the Non-Proliferation Treaty (NPT).

So they were grandfathered out? And why would they need to be if Israel never signed it anyway? But he did bring up a good point that India also never signed the NPT, and the US had no problem even assisting with their program. The Israelis did, also.

And of course he was definitely correct that both Russia and China went along with the Iran sanctions due to the violations of kicking the inspectors out. He did not include the detail though that it was the Shah’s regime that joined the NPT, and the US that funded Iran’s first reactor.

That said, even post-revolution Iran has always claimed to have abided by the NPT. And at the end of the day, not only did the IAEA inspectors never find any diverted enriched uranium or a weapons program, neither Israel nor the US put any Intel on the table showing that they did.

Yet Israel threatened to attack Iran for years, when we know now it had nothing, and the US went along with the hoax to punish Iran with the sanctions to hold back its conventional military development. That has all boomeranged in a way.

The Iran sanctions triggered its “Manhattan program” to build up its own domestic weapons program using its skilled talent and industrial base, and Iran is much stronger militarily now than before the sanctions. On the other hand, the US, Britain, France and Germany have been able to load the Gulf States with billions in weapons sales during the economic slump…no dummies they… JD ]

Former United States Joint Chief of Staff and Sec of State Colin Powell’s email was hacked and it revealed that Israel has 200 nuclear warheads pointing at Iran.

It has been an open secret that Israel has nuclear weapons. With the revelation of this email, once again American politicians’ patriotism for their own nation is being questioned as it is illegal for the US to give aid to a nuclear nation which has not signed the Non Proliferation Treaty.

Tel Aviv has not only refused to sign the NPT but it gets billions of American taxpayers dollars every year.