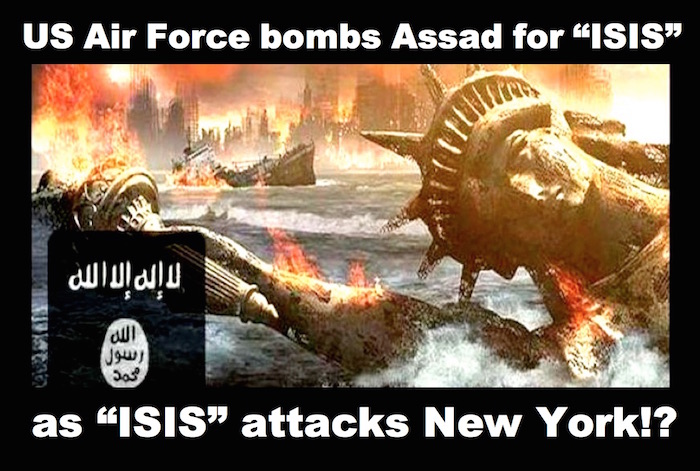 Saudi Arabia’s corrupt royal family and wahhabi distortion of Islam (the breeding ground of “ISIS”) keeps right on “attacking America” – with the complicity of high-level American/Zionist traitors, who have now made the USAF “ISIS’s Air Force.” 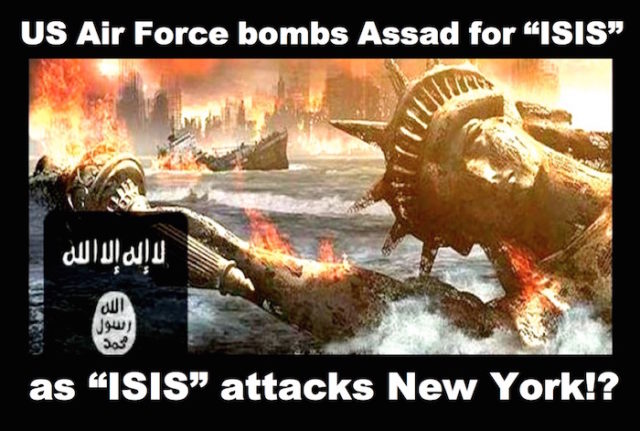 “We are reaching a really terrifying conclusion for the whole world: That the White House is defending Islamic State. Now there can be no doubts about that.”

That’s the official Russian position, folks. And the Rooskies are right.

They were referring to US forces bombing a Syrian military base at al-Tharda mountain in support of ISIS’s advance, killing more than 60 Syrian soldiers.

Meanwhile, back in the Homeland, the US government (or at least its neocon-Zionist faction) was likely complicit in IED bombings in New York and New Jersey. You don’t have to be Nostradamus to predict that “ISIS” will be blamed for the bombings, which were designed to incite public hysteria and push for more muscular (pro-ISIS) intervention in Syria.

As a whole section of my edited book ANOTHER French False Flag explains: ISIS IS US.

And since Trump is the likely beneficiary of ISIS hysteria, one suspects that certain pro-Trump forces – such as the Adelson-Giuliani-Woolsey faction – might be involved.

Yes, I know that most of the neocons support Hillary Clinton.

But other neocons understand that Trump’s uncorking the shaken-up bottle of Islamophobia could lead to a very useful (for them) explosion.

They figure the 9/11-triggered War on Islam for Israel could really go into overdrive if Trump is elected on a wave of extreme terror hysteria. And they have the means, motive and opportunity to create that hysteria – through false flag terror, one of their major areas of expertise.

Then again, Hitlery Clinton (apologies to Uncle Adolf for that expression) could easily prove just as proficient at destroying the world. After all, it would appear to be her team that wants to ramp up pro-ISIS interventions in Syria. And the more her campaign claims Trump is a good friend of Putin, the more I worry about her and the less I worry about Trump.

It’s truly an election from hell.

I would love to imagine Hillary bowing out for health reasons and Bernie Sanders saving the day. Or Jill Stein and Ajamu Baraka somehow forging a miraculous triumph.  Or even Gary Johnson convincing Americans they’d be much better off with a president who has no interest whatsoever in Aleppo.

Gary, of course, would be right about that.

My presidential fantasies are getting more and more desperate.

Now I am trying to visualize Stu Webb revitalizing his “Gordon Duff for President” campaign. But that probably won’t happen. Overnight, Stu went from believing Gordon is God, to believing he’s the Devil.

Then again, Stu is crazy as a long-tailed cat in a room full of rocking chairs. Maybe he’s crazy enough to change his mind one more time. And smart enough to get Gordon elected.

That news is so exciting that I feel like jumping into my time machine, setting the dials for November 8th, and voting for Andy Bassagio RIGHT NOW!

On the other hand, then I would miss all of the horrifically entertaining madness between now and November 8th.

So on second thought, I think I’ll skip that time machine.

I’ve got front row seats at the Apocalypse.

So I might as well kick back and enjoy it.