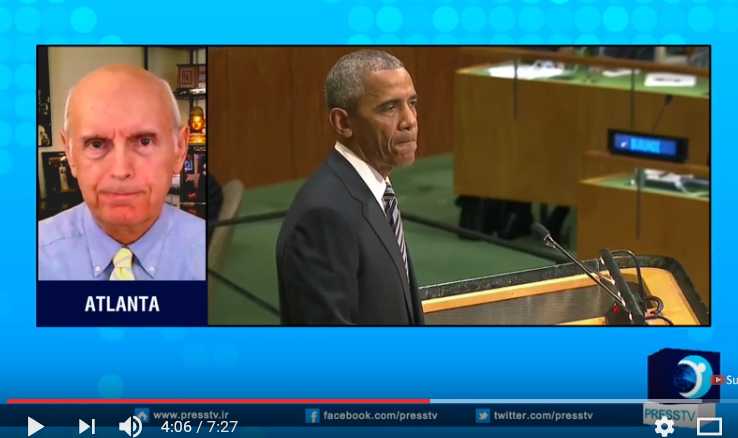 [ Note: Halfway through Obama’s talk, I had already filled my notebook page with points I wanted to rebut, but I knew there would not be enough time in the PTV news show we were waiting to do. I was almost exhausted when Obama was finally done.

His speech writers went too far in trying to wallpaper over some of his bloodiest work, and George Orwell’s book 1984 came to mind immediately… bad is good, up is down, slavery is freedom, etc.

He started with a long fluff lead in on the well-known good things done by UN efforts, especially decreasing the poverty rates from 40% to 10%. Hidden in the number is what China contributed via its incredible work in rural poverty.

But that all turned out to be a smooth lead in for the Russia bashing he did, with the dig at Putin wanting to recapture some past Soviet glory in Syria “by force”, an off the scale cheap shot. The West was the flagrant aggressor there, and we have the tapes and thousand of witnesses to prove it.

Then he went on to use the term “True Democracy” which almost made me gag, since we had held the Donbass people hostage and denied the Crimean people an acknowledgement for the 90+ percent vote to reject having the Kiev coup’s boot on its neck.

I did give him credit where it was due. He got the US military out of Iraq and put the Iran nuclear hoax to bed, something the Republicans never would have done. We have to stay in Afghanistan, or it would be overthrown by the Taliban in three months if we left.

Dear Obama speech writers, you did “A Bridge Too Far ” number on this one. Yes, you grabbed a piece of history, but not one I would want my name on, by any means. But I did sign my name to this critique… JD ]

US President Barack Obama says Israel has to realize it cannot permanently occupy the Palestinian lands. Obama made the remarks in his final address to the United Nations General Assembly at the UN headquarters in New York on Tuesday.

Speaking about Russia, he also said if the country continues to meddle in the affairs of its neighbors that will make its borders less secure. Obama accused Russia of trying to recover power through force.

“In a world that left the age of empire behind, we see Russia attempting to recover lost glory through force,” he said. In addition, Obama said diplomacy is the only way to end the five-year deadly war in Syria, as a shaky ceasefire brokered by the US and Russia is in danger of falling apart.

“There’s no ultimate military victory to be won, we’re going to have to pursue the hard work of the diplomacy that aims to stop the violence and deliver aid to those in need,” Obama told the General Assembly.

Addressing the issue of global warming, Obama called on the world to bring the Paris climate agreement into force as soon as possible.

“If we don’t act boldly, the bill that could come due will be mass migrations and cities submerged and nations displaced and food supplies decimated and conflicted born of despair,” he said.

“There must be a sense of urgency about bringing the agreement into force and helping poorer countries leapfrog destructive forms of energy.”