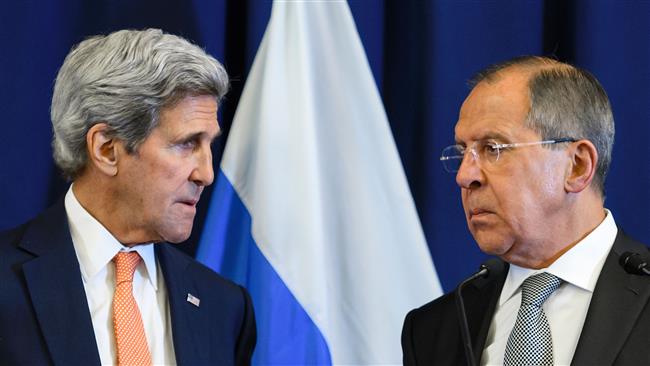 US Secretary of State John Kerry and Russian Foreign Minister Sergei Lavrov look toward one another during a press conference following their meeting in Geneva on September 9, 2016. (AFP photo)

Press TV has interviewed Gordon Duff, senior editor of Veterans Today in Ohio, to discuss the recent attacks by the US-led coalition on Syrian troops in Dayr al-Zawr.

Press TV: The Syrian army has announced the end of the ceasefire. Do you think this was designed by the US in order for Syria to make such an announcement?

Duff: I believe it’s all been theater. But I think it began with the setup by forces within the US. This is one of the things that hasn’t even been looked at. But the real loser here is Russia and I believe this is initially a US attempt to interfere in the parliamentary elections in Russia.

Looking at the potential meetings between Kerry and Lavrov, how can Kerry walk into a meeting with Lavrov after something like this? It’s got to be impossible. The US went after Russia when Russia’s bombing campaign began in 2015 for using iron bombs, unguided munitions. All American munitions are GPS-, satellite-navigated.

There are no accidental bombings by the US. The lines at Dayr al-Zawr, where the bombing occurred and where 83 Syrian army were killed, have been within 100 meters since 2015. They’ve been very standardized. The US and Britain bombed clearly long-established lines, using guided munitions, satellite surveillance and drone surveillance. They had a full surveillance package on this.

This was very much a planned attack. To the US, ISIS [Daesh] is a small player. The US is here to destabilize Russia. Syria is the tool the US is using. This is how I see it.

Press TV: Don’t you think that the strategy is flawed? Because there may be a reaction coming from Russia using their air force to target the so-called Free Syrian Army. That could be one of the consequences. Are the US and the coalition ready for that?

It’s all been an attack on the Kurds. The same thing they were doing year after year. It’s all theater. But this theater in Syria is tied to an American plan to destabilize Russia. Part of the same battle that’s going on in the Pacific over almost non-existing islands that no one cares about. Like we’re supposed to forget that China is America’s largest trade partner and holds trillions in American debt. The US can’t survive without China. Why would they fight a war against China?

No, this is a broader global issue being fought out destroying the Middle East and butchering hundreds of thousands of Syrian people. It’s clearly staged by the United States. No one has a question of any kind anymore.

Press TV: This incident is not something that can be brushed aside based on the Syrian and the Russian point of view. If we were to see what type of reaction this would draw from Russia in particular, what can we expect?

Duff: While the bombing was still going on, I received calls from two Syrian ministers. [They] called me and asked me what was going on and if the United States had lost their minds? They didn’t believe it. They don’t have love for the United States, but they didn’t think we were insane.

The US has shown a willingness to sacrifice any credibility of any kind. This is an election year, an election like non we’ve ever seen in the US. We have elections like they have nowhere else: rigged, insane, violent. American elections are insanity.

I’d like to say there was a strategy of oil in the Middle East, except the world’s glut with oil. Gasoline is well under two dollars a gallon here in the United States. It’s not about any of that. It’s about war for the purpose of war, nothing but war. It’s a game to these people. And these people obviously control the United States government. We have no questions about that.