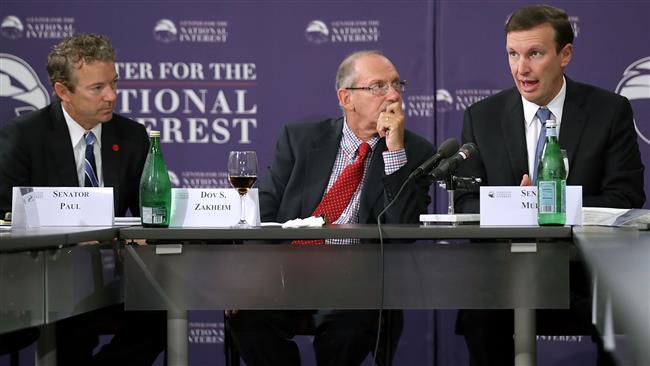 The US Senate is set to vote on a bipartisan resolution aimed at blocking sale of $1.15 billion worth of military equipment to Saudi Arabia over its war on Yemen.

The resolution of disapproval was drafted by a group of Republican and Democratic senators — Rand Paul, Mike Lee, Chris Murphy and Al Franken — earlier this month.

Republican Senator and former presidential candidate Paul said on Monday at the Center for the National Interest in Washington, DC, that the senators were planning to introduce the resolution on Wednesday.

“This resolution will say to the president that we disapprove of the sale of arms to Saudi Arabia,” stated Paul, who represents the US state of Kentucky.

The White House is expected to object to the resolution since it already gave preliminary approval for the sale of weaponry.

Senators, who back the measure, say a positive vote will relay a strong message to Saudi Arabia about concerns the US has over Riyadh’s bombing of Yemen

Democratic Senator Murphy from Connecticut said on Monday that the vote to is expected to come to the Senate floor as early as Tuesday.

“I think this war in Yemen poses an immediate crisis within our relationship,” he said. “I think we need to press pause on this arms sale in order to send a strong signal to the Saudis that the way they have conducted this war is unacceptable.”

Last month, the US Department of State approved the sale of more than 130 Abrams tanks, 20 armored recovery vehicles and other equipment worth about $1.15 billion to Saudi Arabia.

The Defense Security Cooperation Agency, which is part of the Pentagon and facilitates foreign arms sales, said the sale would contribute to US national security by improving the security of a regional ally.

This is while the Saudi monarchy’s forces have been accused of war crimes in neighboring Yemen since last year.

Saudi Arabia and its Persian Gulf Arab allies launched a military aggression against Yemen in March 2015 in a bid to bring the country’s former president Abd Rabbuh Mansur Hadi, a staunch ally of Riyadh, back to power and undermine the Ansarullah movement.

ccording to Connecticut Senator Murphy, the Saudi aggression has ended in a war that “has become a disaster that is making our country less safe every day.”

“Thousands of civilians are being killed, and terrorist groups inside the country, like al-Qaeda and ISIL (Daesh), are getting stronger. Until the Saudis’ conduct changes, the US should put a pause on further arms sales,” Murphy said last month.

Saudi Arabia was the world’s largest arms importer in 2015, purchasing 9.3 billion in military equipment, according to IHS, a consulting company in Englewood, Colorado.

The US remained the top weapons exporter last year, providing nearly $23 billion in goods and equipment, of which $8.8 billion went to the Middle East, IHS said in its Global Defense Trade Report published in June.