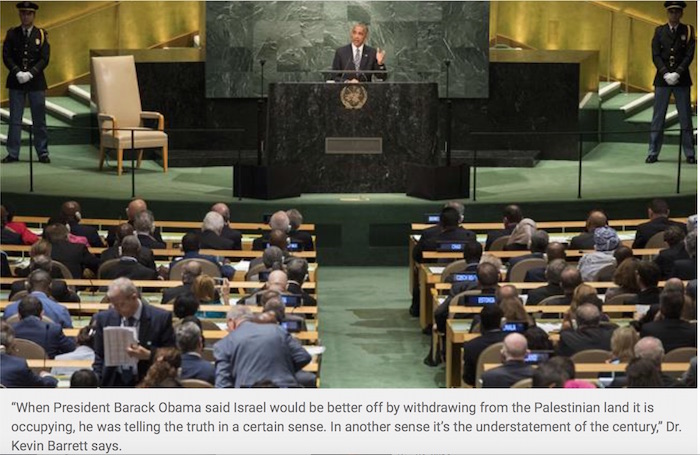 US President Barack Obama’s statement that Israel should withdraw from the occupied Palestinian land is the understatement of the century, an American author and political commentator says.

Dr. Kevin Barrett, a founding member of the Muslim-Jewish-Christian Alliance, made the remarks in an interview with Press TV while commenting on Obama’s final address to the United Nations General Assembly. 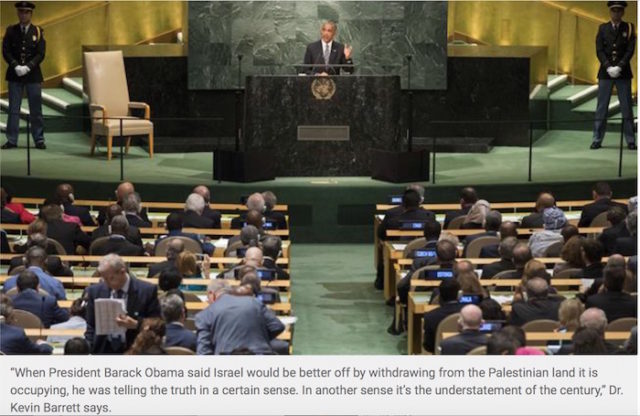 Speaking at the UN headquarters in New York, Obama said on Tuesday Israel would be better off if it makes peace with Palestinians and realizes it cannot permanently occupy the Palestinian lands.

“When President Barack Obama said Israel would be better off by withdrawing from the Palestinian land it is occupying, he was telling the truth in a certain sense. In another sense it’s the understatement of the century,” Dr. Barrett said.

“And if the goal of Israel is to essentially have a viable, long-term nation in which the people there can live fulfilling lives, then Barack Obama’s statement is a major understatement,” the analyst noted.

“That is, Israel absolutely must find a way to immediately make peace with its neighbors, withdraw to its 1967 borders, admit the rights of Palestinian ethnic cleansing victims to return and be compensated for their losses, and implement that in a reasonable and viable way. This would lead to prosperity for the people of the Holy Land,” he added.

Dr. Barrett said, “On the other hand if look at this from a slightly different point of view and think of Israel as a ‘Greater Israel’ project  conceived by Jabotinski’s extremist, terrorist, Likudist faction of power in Israel which currently dominates Israeli politics, then the worst thing that Israel could do would be to make peace with its neighbors and to live in peace and prosperity, because that’s not what they are interested in.”

“So essentially if Israel wants to become ‘Greater Israel’ and then ultimately seize all of the land between the Nile and Euphrates Rivers as these extremist, psychotics believe they had been promised by God thousands of years ago, then making peace with their neighbors as President Obama suggests would not be in their interests,” the scholar pointed out.

“And I think this is really kind of a battle for the soul of Israel. That is, there are people in Israel, decent people, who really would like to just get along with their lives,” he said.

“But then there are also these extremist architects of the entire Zionist project who have always found that they can prosper and continue to steal more land and resources by maintaining a state of perpetual war, and the best way to do that is keep perpetrating atrocities against the Palestinians,” Dr. Barrett observed.