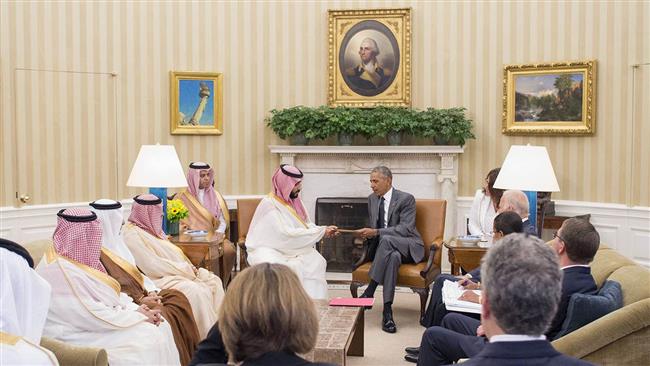 US President Barack Obama is set to veto legislation which gives the families of 9/11 attack victims a civil cause of action against Saudi Arabia in American courts.

Obama administration officials have said the president will reject the “Justice Against Sponsors of Terrorism Act” by a Friday veto deadline, AFP reported on Thursday.

The legislation unanimously passed on September 9 by both houses of Congress would allow the families to sue the Saudi Arabian government in a US federal court.

On Wednesday, the European Union (EU) called on Obama to veto the bill. “The European Union considers that the adoption of the bill and its subsequent implementation might have unwanted consequences as other States may seek to adopt similar legislation, leading to a further weakening of the principles of State sovereign immunity,” the EU delegation to the United States said in a statement.

President Obama has come under pressure from Democratic lawmakers and 9/11 victims’ families who support the legislation.

Some lawmakers, including Congresswoman Rosa DeLauro and Senator Richard Blumenthal, have called on Obama to sign the bill. Congressional insiders insist they have the votes needed to override the presidential veto.

The White House says the legislation will set a dangerous legal precedent and allow foreigners to sue the United States.

Saudi Arabia has strongly opposed the bill and threatened to sell off $750 billion in American assets if it becomes law.

The Saudi government denies any links to the 9/11 attacks. This is while declassified documents show US intelligence had evidence about links between the Saudi government and the attackers. Fifteen of the 19 hijackers were Saudi citizens.

“While in the United States, some of the 9/11 hijackers were in contact with, and received support or assistance from, individuals who may be connected to the Saudi government,” a US intelligence finding read.

Meanwhile, a large number of activists and family members of the September 11 attacks marched on the White House on Wednesday, protesting President Obama’s decision to veto Justice Against Sponsors of Terrorism bill.

“Fifteen years is already far too long to be asked to wait for accountability for the deaths and injuries suffered in the 9/11 attacks,” said Terry Strada, widow of a 9/11 victim.

On Wednesday, the Senate endorsed a military deal with Saudi Arabia worth of $1.15 billion despite initial opposition to the move forwarded by the Obama administration. A bill introduced to obstruct the move was killed by the lawmakers in a 71-to-27 vote.

The bipartisan legislation had been introduced by Republican Senator Rand Paul and Democratic Senator Chris Murphy in an effort to stop dealing with an aggressor, engaged in war crimes in neighboring Yemen.

In August, the Pentagon said that the US State Department had approved the potential sale. The deal was also strongly censured by human rights activists.

Saudi Arabia was the world’s largest arms importer in 2015, purchasing 9.3 billion in military equipment, according to IHS, a consulting company in Englewood, Colorado.

The US remained the top weapons exporter last year, providing nearly $23 billion in goods and equipment, of which $8.8 billion went to the Middle East, IHS said in its Global Defense Trade Report published in June.