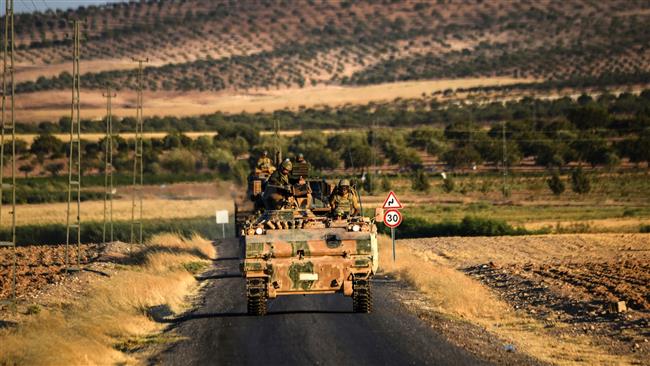 [ Editor’s Note: We see Turkey taking advantage of the ceasefire chaos in Syria to concentrate on its wish list, pushing the Kurds away from the border areas and establishing a VERY deep buffer zone, a defacto occupation of Syrian territory which Damascus is powerless to do anything about now.

Russia has been mum on these Turkish moves, with their hands full dealing with a full plate of live fire problems and Kerry’s dancing a diplomatic jig around the ceasefire. It is 3pm now and we still have no confirmation on the alleged Russian navy missile strike on the foreign command center SW of Aleppo.

A lot of balls are in the air now, and historically a few get dropped in all the confusion so more might leak out on this story. At leased Assad finally made a public statement, which was really needed… Jim W. Dean ]

“As part of the Euphrates Shield operation, an area of 900 square kilometers has been cleared of terror so far. This area is pushing south,” Erdogan said, referring to the operation that got underway on August 24.

He also expressed his ambition to extend the so-called safe zone, from an earlier declared area of only 98 kilometers, to a staggering 5,000 square kilometers, stretching from the town of Jarablus to the city of A’zaz.

“We may extend this area to 5,000 square kilometers as part of a safe zone,” the Turkish president told a press conference before heading to New York where he is due to address the United Nations General Assembly.

Erdogan added that Turkish-backed militants of the so-called Free Syrian Army are now crawling towards the Daesh- seized town of al-Bab.

“Jarablus and al-Rai have been cleansed. Now we are moving towards al-Bab. We will go there and stop (Daesh) from being a threat to us,” he said.

Meanwhile, the Turkish military says its fighter jets have bombed the positions of the Daesh terrorist group in northern Syria.

Turkey’s military said on Monday that the airstrikes had targeted three Daesh positions used as shelters, ammunition depots and military headquarters in northern Syria on Sunday.

Ankara deployed troops and tanks to northern Syria on August 24 in a declared bid against Daesh as well as Kurdish militants. Syria, which has been fighting foreign-backed militancy since March 2011, has denounced the Turkish incursion as a breach of its sovereignty.

Last month, Turkish tanks entered Syria to allegedly strike Daesh terrorists in Jarablus, and its air force along with US-led military coalition aircraft pounded targets in and around the city.

The Turkish claims that it is hitting terrorists in Syria come as reports indicate that Ankara has been supporting the anti-Damascus militants inside the Arab country.

Citing Turkey’s Demokrasi newspaper, the report said the truckloads had been sent to the Takfiri Jabhat Fateh al-Sham — formerly known as al-Nusra Front — and Ahrar al-Sham groups in the northwestern city of Idlib.

The report added that the steel pipes were produced in a factory in the Turkish city of Iskenderun.

The report also quoted eyewitnesses as saying that the shipments had been transferred to the militants under the protection of Turkish military forces.

Turkey is said to be among the main supporters of the militant groups operating against the government of Syrian President Bashar al-Assad.