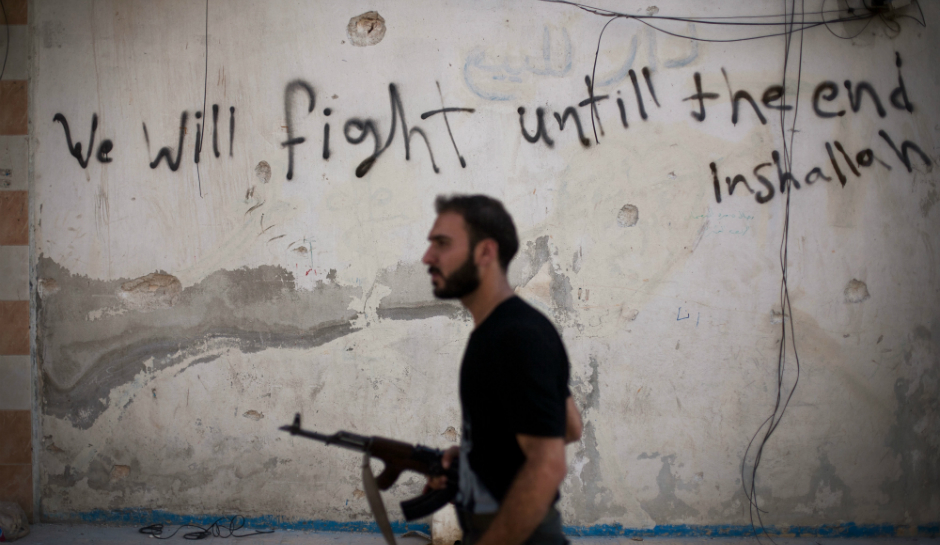 Is the Syrian Ceasefire a Dead Man Walking?

“Never attempt to win by force what can be won by deception.” ― Niccolò Machiavelli

[ Note: I would like to thank NEO for getting this piece up quickly, as war material can become old news fast on a moving target like a ceasefire, where evening news can look like a different conflict than reports from the morning.

There is enough evidence to support anyone being fatalistic about ever seeing the warring sides in Syria stop fighting as long as the ammo and supplies keep flowing in. That is why I used the “Dead Man Walking” symbolism, as it seems that Syria has been sentenced to death by its Western and Gulf State tormentors, and praying for a reprieve before the end.

We saw some very shady blame-game maneuverings going on during the first week, and shameful reporting from the West, almost like reading Pravda from the old Soviet days. The secret ceasefire agreement triggered a battlefield all on its own.

The term “state-sponsored terrorism” is never used to describe the foreign backers of the many opposition groups, some who change names more often than their underwear. Even Mr. Ban ki-Moon will never touch the term with a ten foot pole.

That failure is what is giving legitimacy to those countries using proxy terrorists. Why should they stop, when they don’t see serious efforts to make them do so, or even discussions? I fear that this could get worse before it gets better … JD ] The Syrian ceasefire exists in name only, after the Kerry-Lavrov UN side meeting when they stated they would carry forward even after fighting resumed. But realistically, how can they do that when the ceasefire itself has become a war of words, charges and counter-charges, deceptions and half-truths?

On death row, when a condemned man is walking to his execution, “Dead man walking” is called down the cell block so those next in line can give their last salute to one about to meet his end, along with any illusions of a last minute reprieve.

This will go down as one of the hardest to negotiate ceasefires; and we can see it began unraveling before the ink was dry. The US opposition racked up 300 violations, and used the week to rest and restock to begin a new offensive on southwestern Aleppo. That attack was defeated by the Syrian coalition which had expected it.

At the talks, a key ingredient of ceasefire credibility was missing, as there were no enforcement mechanisms in the agreement. There were no consequences whatsoever to rein in the rogue elements caught violating the ceasefire, and for whom obeying the rules does not seem to be a lifelong aspiration.

I wrote here on NEO on September 13th , Has the Syrian War Finally Reached the Tipping Point?, that US Syrian envoy Michael Ratney was tasked to poll the US-supported opposition groups to get their formal acceptance of the ceasefire and to warn them of “dire consequences” if they did not disengage with the al-Nusra forces that were still on the target list.

We know now there were none. His statement was a PR stunt.

The opposition groups decided just go ahead and sign onto the ceasefire so the US would have its list to submit to the Russians, and then they did whatever they wanted. We saw this quickly when, in the first few days, the opposition continued to violate the ceasefire, but Kerry and the Western media generally ignored it.

The Western Press played its usual sordid role by ignoring the details of large violations by the opposition, while giving front page coverage to anti-Damascus news, despite the Syrian Air Force standing down for the week on attacks against the ceasefire-approved opposition forces.

The Russians had gone to great lengths to publish that they have deployed their ability to monitor the ceasefire quite extensively, perhaps hoping to discourage violations. But when these violate reports were treated as nothing by the US coalition, then the violations increased. The rebel groups read between the lines that they could use the ceasefire to their advantage, and they did.

We next saw Lavrov asking for the ceasefire agreements to be made public, so the public could see which side was the major violator. The US ignored that request, as it seems there was an agreement that it could not be disclosed without both parties agreeing, and the US has taken advantage of that.

As the rebel violations continued to increase throughout the week, it became obvious that the US either had no control over getting compliance from the opposition groups, or was playing make believe in actually trying to, or the Gulf State backers had made an end run around the US and other groups that it has funded to wreck the ceasefire. I mentioned in my NEO article on the 13th that this was a possibility.

The Ceasefire goes out with a bang

The US’ casual attitude toward the ceasefire violations increased the anger of the Russians, who then began to accuse the US of breaking the agreement that the Russians would guarantee Damascus’ compliance and the US would guarantee the opposition’s.

After this, things got much worse. We had the irresponsible US coalition attack on the Syrians at the Deir Ezzor airport, followed immediately by an ISIL offensive against the Syrians.

This was followed by a weak admission of its being a mistake, and then the revelation that, out of the four planes involved, Australia and Norway had been involved.

This appeared to Cold War veterans like the US allies wanted to get some of their pilots “blooded” with a strike from Iraqi bases. So far, we have heard nothing from the Iraqis about their bases being used for the strike.

We have to ask why the US would run such an operation during the first delicate and critical week of the ceasefire, when the agreement allowed for joint strikes to begin the second week. VT analysts do not believe the Deir Ezzor strike was a mistake but payback to the Syrians and Russians for being too public about the US side doing all of the ceasefire violations and the Russian requests to have the agreements made public.

All US coalition bombs are GPS guided, and the Syrians have been at the Deir Ezzor airport position for a long time now. There is no way the US coalition could not have known exactly where they were. This the strong smell of an act of war provocation to cause the Syrian coalition to break the ceasefire themselves in retaliation, so the US would put that blame on them, but they did not bite.

As the ceasefire closed in on its last day, it now seems that the US decided it needed a psychological operation to counter any bad press of the past few days. It knew the Syrians had picked up on opposition plans to launch a new offensive against Aleppo, and the Syrian and Russian Airforce would do an airborne counterattack, which they did.

So, like a magician pulling a rabbit out of a hat, we had the night attack on an aid convoy on SW Aleppo, just as the opposition launched its new attack on that flank. We wake up in the morning to find a well-coordinated media campaign alleging Syrian coalition responsibility.

We right away saw this at VT as a ploy to move the press coverage off the US and opposition responsibility for the ceasefire failure. But so far they have failed. Even the UN has retracted its early charges of a bombing attack as a translation mistake.

But even that was a sham, because the Syrian Air Force has never flow night operations, not having the required equipment in their planes to do so. Although the US State Department instantly condemned the night bombing, it had to know better from its extensive battlefield surveillance.

Major-General Igor Konashenkov, a spokesman for the Russian Defense Ministry, stated that it tracked a Predator drone from the Incirlik Air base in Turkey that flew to the convoy location that night, arriving just before the claimed attack.

The general third party consensus now is that the convoy was probably shelled, as it was a static target; and which the opposition in that territory easily could have done as a false flag operation, of the kind so typically used in this Syrian war.

John Kerry had the gall at the UN Security Council Meeting on the aid convoy event to demand that Russia take responsibility for it and ground the Syrian Air Force to “restore credibility to the process”.

But once again we see the US refusing to accept any responsibility for its proxies’ violations, playing the “do as I say, not as I do” game. But mind you, the US has put no drone or satellite Intel on the table to prove that the convoy was bombed.

Lavrov has countered by calling for an independent investigation, when Kerry does not want one at all. Lavrov also stated that the Syrian government forces would not unilaterally stop fighting, since their having done so during the ceasefire week was exploited, with the US bombing the Syrian Army in Deir Ezzor.

We could possibly see an escalation in the conflict. The Russians are bringing in their flagship aircraft carrier, the Admiral Kuznetsov, to boost their Mediterranean fleet firepower.

Everyone seems to have forgotten about the published news two weeks ago on the Iranian Hamadan Air Base being refitted to host the return of the Russian heavy bombers to repeat their shorter range sorties to Syria from there…if needed.

And last, we have the offensive on Mosul on schedule for early October, where US-supporting air assets will be busy concentrating on that key battle. We could possibly see Russian bombers flying overhead on their way back and forth between Hamadan and Syria.

Would the Russian Hamadan-based planes run support missions against Mosul if requested by the Iraqi government? Nobody knows at the moment, but I can clearly see the preparation for an escalated conflict being put in place, where another “payback” like we saw in Deir Ezzor could take the Syrian war into a new realm.

There are those who would love to see that, and I think we all know who they are.