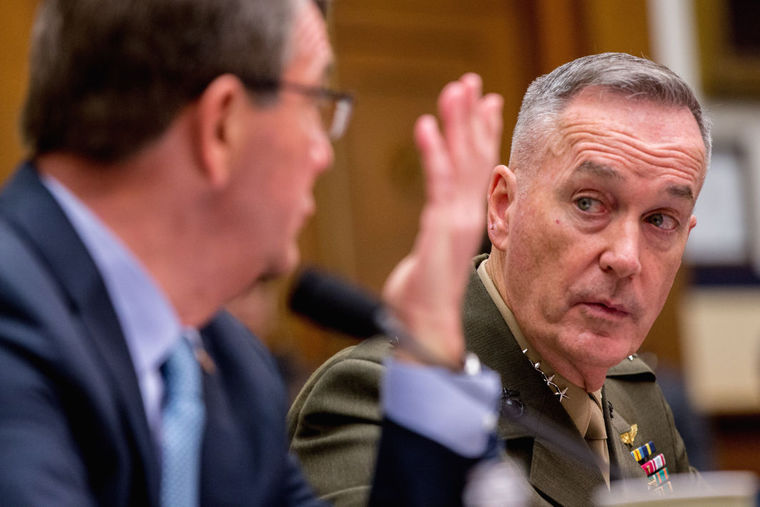 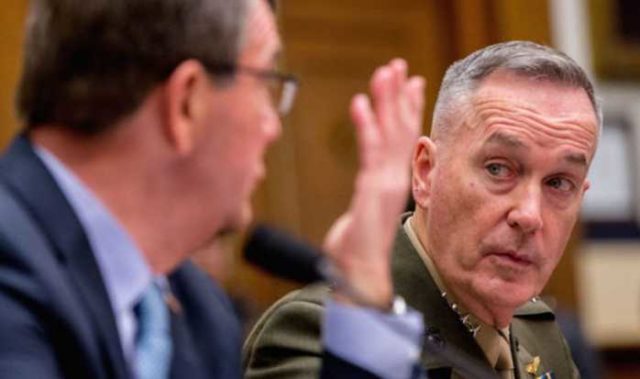 [ Editor’s Note: You just can’t make this stuff up. General Dunford “has no facts” but he blames Russia in front of Congress for the attack on the  Aleppo aid convoy. He appointed himself judge and jury, but skipped over the investigator part.

But then he goes even further into the Twilight Zone by saying that our defense industry partners need to be as “cutting edge” as we are. I can just imagine the reaction that got in Allied military commands.

Somehow I just don’t think that kind of decision making process is taught at West Point. It was put propaganda, and of course the Joint Chief of Staff was not going to buck the Secretary of Defense.

This is one of the reasons why American voters have always been wary of making generals presidents. The thought scares a lot of voters. I will date myself here by quoting the old American TV show Dragnet, where the infamous Sgt. Joe Friday would say, “Just the facts ma’am, just the facts.”

Ash Carter joined the Twilight Zone parade himself with his incredible twisting the knife statement that the Russians were responsible for the aid convoy attack whether they did it or not because of their “association” with the Syrian regime.

Dear Mr. Carter, does that not make the US responsible for the 300 opposition ceasefire violations due to our “association” with our terrorist proxies? I won’t hold my breath for your answer… Jim W. Dean ]

Speaking to the US Senate, the Pentagon’s leaders blamed Russia for the Aleppo aid convoy attack, but admitted they “had no facts.” Only US coalition planes should be allowed over Syria, they said, though that would require war against both Syria and Russia.

Defense Secretary Ash Carter and General Joseph Dunford, Chairman of the Joint Chiefs of Staff, faced the Senate Armed Services Committee on Thursday to report on the ongoing military operations and “national security challenges” faced by the US. They also asked the senators for more reliable funding, saying the uncertainty was hurting the defense industry.

“Not only our people – our defense industry partners, too, need stability and longer-term plans to be as efficient and cutting-edge as we need them to be,” Carter told the senators.

The lawmakers were far less interested in the war against Islamic State (IS, formerly ISIS/ISIL) than about the future of the Syrian government, Iran’s “malign influence,” and “aggression” by China and Russia – all ranked far ahead of terrorism on Carter and Dunford’s list of security challenges.

The Pentagon had “no intention” of sharing intelligence with Russia when it came to Syria, Dunford told the lawmakers unequivocally. Secretary Carter explained that the joint implementation councils envisioned by the ceasefire proposal negotiated in Geneva wouldn’t share intelligence, just coordinate efforts – but that they were a moot point anyway, since the ceasefire was effectively dead.

“I don’t have the facts,” Dunford said, when asked about the convoy attack by Sen. Richard Blumenthal (D-Connecticut). “It was either the Russians or the regime,” he added.

“There is no doubt in my mind that the Russians are responsible,” whether directly or because they backed the government in Damascus, Dunford said, describing the attack as “an unacceptable atrocity.”

Carter explained Dunford’s logic in a response to Sen. Lindsey Graham (R-South Carolina), saying that “the Russians are responsible for this strike whether they conducted it or not, because they took responsibility for the conduct of the Syrians by associating themselves with the Syrian regime.”

“There can be no question of grounding US aircraft” over Syria, he said, adding that US jets conduct their strikes “with exceptional precision… that no other country can match.”

Sen. Roger Wicker (R-Mississippi) asked about what it would take for the US to impose a no-fly zone over Syria, using the phrase “control the airspace.”

“Right now… for us to control all of the airspace in Syria would require us to go to war against Syria and Russia,” Dunford replied, drawing a rebuke from committee chairman John McCain (R-Arizona), who argued a no-fly zone was possible without war.

Asked about the video of US-backed Syrian rebels insulting US Special Forces in Al-Rai and running them out of the northern Syrian town, Carter and Dunford shrugged it off.

A “very small minority took verbal action” against US troops, said Dunford, who admitted he did not watch the video but had discussed it with US commanders. He said the incident was “irrelevant” because the US-backed forces and Turkey were making “great progress” along Syria’s northern border.

In their exchange with Graham, Carter and Dunford confirmed there is a plan to arm the Kurdish militia in Syria, over Turkish objections, as a way of advancing on the IS stronghold of Raqqa. Once Raqqa is taken, however, an Arab force would be required to hold it. “We have a plan,” Dunford said, but described it as “not resourced.”

Dunford agreed with Graham’s assertion that the US had two objectives – to destroy IS and to “remove Assad,” referring to the Syrian president – but admitted the Kurds were not interested in the latter.

“If the main fighting force inside of Syria is not signed up to take Assad out, where does that force come from?” Graham asked. Neither Dunford nor Carter had an answer to that.

Both the Pentagon heads and the lawmakers agreed throughout the hearing that caps on military spending mandated by sequestration were harmful and needed to be repealed. Lack of funding posed a significant threat to readiness and maintenance, Carter and Dunford argued, before pointing out that the US military was still the strongest, most powerful and most competent in the world.