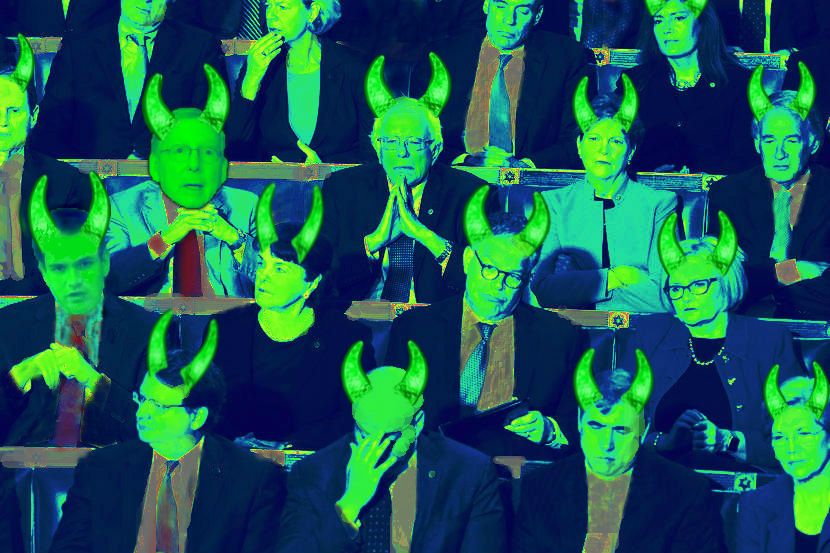 Not only does candidate Donald Trump need to read the US Constitution, but every citizen and every voter must read it to understand that our problems and failings in the US are not the presidencies, but the Congress. Only last week, the Senate failed to include authorization in the budget to fix the drinking water of Flint, Michigan, but many senators who voted against clean drinking water for Flint, were not too happy with the mere $38 billion give-away to Israel and are asking for additional funds. This is the Congress we have.

It is interesting to note that Congress spent tens of millions of dollars investigating the collapse of our financial system that affected tens of millions here in the US and around the world.

After more than 2 years of investigation, Congress concluded its findings, issued a report of tens of thousands of pages, sealed the report and sent it to the National Archives for 5 years, rather than to the Justice Department to avoid bringing charges against specific names and specific banks named in the report. This is the kind of Congress we have — covering criminal enterprises.

Anyone who believes that Donald Trump or Hilary Clinton will make a material difference to the future of the nation is a stupid fool. It is the Congress that has the real power to reshape the nation and its future. The Speaker of the House, while not enjoying the privileges of Air Force One and the trappings of the Presidency, is the most powerful man in Washington.

While Article I vests the power of the Commander in Chief in the President, Section 2 limits and defines such powers by “advice and consent”.

Notice that Article 1, Section 8 gives Congress the power to tax and spend. Add to that the 16th Amendment, which gave Congress the exclusive right to levy the tax and authorize spending, while Clause 3 vests the “Commerce Powers” in Congress to regulate the movement of people, goods and trade between the different states and internationally.

The president does not enjoy such powers.

So when you hear both candidates promise they would take charge and make the promised changes, they are lying and they know it.

It is Congress that enabled through 30,000 pages of tax regulations, many of US companies to shift their manufacturing operation overseas, to put many people out of jobs and to allow companies to cheat workers out of their pensions and retirements without any problems and “park” more than $ 2 trillion of profits in tax havens.

It is the same Congress that allowed and enabled Wall Street to spend $100 Billion on legal fees to defend itself against the millions of people whose livelihoods were ruined by the criminal and reckless negligence of Wall Street.

If the American people want to shape the future of our nation, then we must start with Congress, because this is where the metastasizing cancer that afflicts our nation lies. Don’t expect Congress or the Supreme Court to make the necessary changes, we have to take charge and do it at the voting booth.

Without our votes, members of Congress could never get elected even if they spent $30 million on an election campaign.

To achieve that, we need to follow these 12 Commandments:

1. TERM LIMITS: Candidates for local and congressional offices must be committed to term limits (6-8 years), thus transforming legislative houses to citizen houses, rather than a place for lifetime professional politicians;

3. LIMIT OUTSIDE MONEY: Candidates must be committed not to seek or accept any funding from outside their local, congressional or senatorial districts, thus limiting the amount and influence of outside money.

4. REDUCE LOBBY BRIBE MONEY: Candidates must commit themselves to a maximum of 3 months of campaigning and accepting no “issue” funding from special lobbies.

5. STOP TRAITOROUS BEHAVIORS: Candidates must be committed to America first, before other countries; and seek to limit the undue influence Israel and its Fifth Column and AIPAC have over Congress and the White House;

6. REFORM TAX SYSTEM: Candidates must be committed to reform and overhaul the Tax System, simplifying it from 300,000 pages to less than 30 pages, making sure that every citizen, every corporation and every business pay their fair share of the tax; no more tax loopholes;

7. COMMIT TO BUILD AMERICA: Candidates must be committed to re-invest in America First; in re-industrialization of America; in infrastructure; public transportation systems; public education; industrial education; parks and public facilities; to force the more than $3 trillion of America’s corporate money sitting in tax shelters back to the US;

8. TURN AWAY FOREIGN BRIBE MONEY: Candidates must commit themselves to not accepting lobby money or favors, including paid trips by foreign governments, lobbyists or special interests.

9. STOP FINANCIAL INSANITY: Candidates must be committed to a drastic reform of the financial system, including reining in the undue and toxic influence Wall Street has on our political, economic and social life; and make sure that corporations (as “citizens”) are subject to criminal prosecution, with executives going to jail for crimes or fraud committed by their corporations;

10. REFORM JUSTICE: Candidates must be committed to reform our judicial, criminal justice, social and welfare services system to bring America in line with other nations, and seek reconciliation between all of our citizens, making America the united nation we should be;

11. BALANCE BUDGET: Candidates must be committed to a balanced budget with a budget cycle of 5 years, thus avoiding the paralysis facing our nation annually.

12. NO MORE PREEMPTIVE WARS FOR CORPORATE POWERS: Candidates must be committed to no more wars while keeping our nation strong to defend itself against enemy aggression.

We as citizens and voters must not underestimate our power, the right to vote, which is more powerful than all the billions candidates can raise in elections. Without our votes, no one can win an office.

www.jeffersoncorner.com
ATTENTION READERS
Due to the nature of independent content, VT cannot guarantee content validity.
We ask you to Read Our Content Policy so a clear comprehension of VT's independent non-censored media is understood and given its proper place in the world of news, opinion and media.