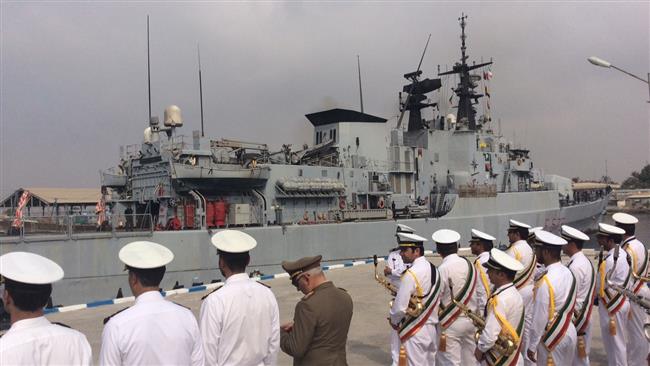 An Italian Navy frigate has docked at Iran’s southern port city of Bandar Abbas in line with the two countries’ plan to boost friendly military relations.

The warship, dubbed Euro, arrived in Bandar Abbas, the capital of Hormozgan Province, on Saturday for a four-day stay.

In a meeting with Italy’s ambassador to Tehran, Mauro Conciatori, and the country’s military attaché, Commander of Iran’s First Naval Zone Admiral Hossein Azad said the Italian frigate has been dispatched to the Islamic Republic with the purpose of improving political, cultural and military relations.

“Given the international nature of naval forces in all countries across the world, naval units comprising warships and air [force] units are dispatched to other countries each year in the form of a fleet,” the Iranian commander added.

He noted that such visits are aimed at enhancing international maritime interactions and conducting joint naval maneuvers between two or more countries.

Iran’s Navy has also an active presence in the international scene by holding naval meetings and making various voyages while hosting the warships of different countries every year, the commander said.

He added that the enemy has always sought to undermine Iran and spread Iranophobia; however, different countries dispatch their military and naval forces to Iran and participate in joint projects as the high level of security in the Islamic Republic has been proved to neighboring and regional countries and the entire world.

Meanwhile, the Italian Navy said the frigate was part of a mission by the European Union to fight piracy.

It added that the visit comes as part of the resumption of “historic and excellent relations” between the Iranian and Italian navies.

In recent years, the Iranian Navy has increased its presence in international waters to protect naval routes and provide security for merchant vessels and tankers.

In line with international efforts against piracy, the Iranian Navy has been also conducting patrols in the Gulf of Aden since November 2008 in order to safeguard merchant containers and oil tankers owned or leased by Iran or other countries.

Iran’s Navy has managed to foil several attacks on both Iranian and foreign tanker ships during its missions in international waters.