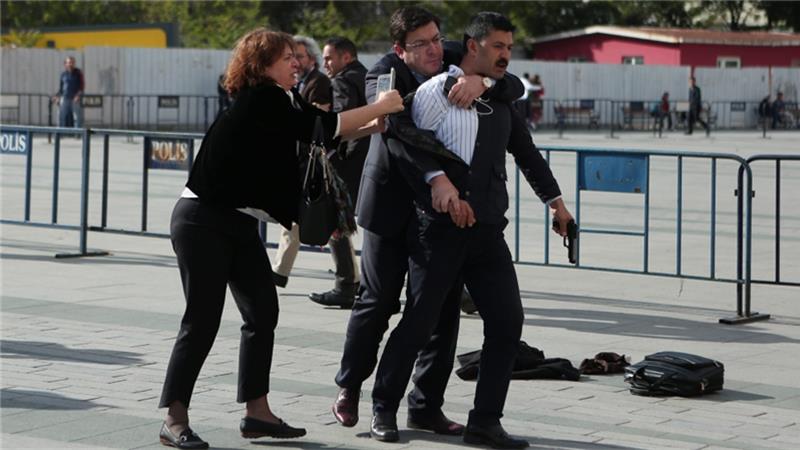 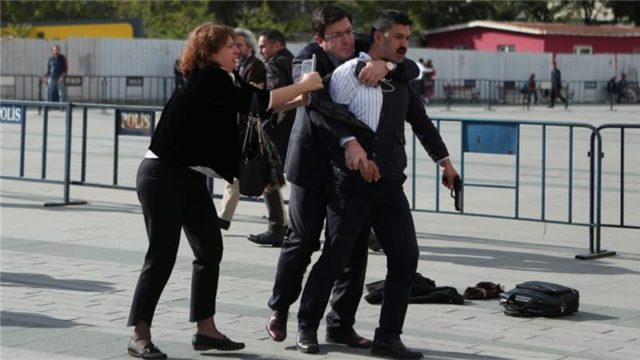 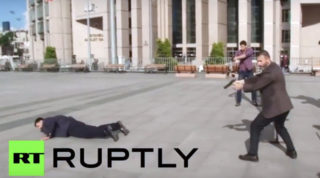 [ Editor’s Note: Can Dündar is lucky that the shooter was a poor shot, and “one” person in the crowd restrained the shooter when he missed with the first two shots — the classic mistake of a nervous shooter jerking the trigger hard, which pulls the shots off to the side.

Fortunately no innocent bystanders were hit by the stray bullets. You can see Dundar was a sitting duck at this outside-the-court news conference, where a shooter can blend in with the crowd for a bushwhack attack. Fortunately, he had not been trained how to do this correctly.

We salute Mr. Dundar and staff for reporting Erdogan’s using “aid convoys” to funnel weapons into the terorrist groups he has supported in Syria. Neither NATO nor the EU has challenged him on this — a dead giveaway that their attitude on terrorism depends on whether they are benefiting from it or being the victims.

The EU public has laid down on this issue, despite the very clear “reap who you sow” aspect to it. As VT has editorialized so frequently, this elephant in the room is state-sponsored terrorism. Many countries don’t seem to see it being as big a security threat as the Jihadi boogeymen, who could not exist on the scale they do without State sponsors… Jim W. Dean ] 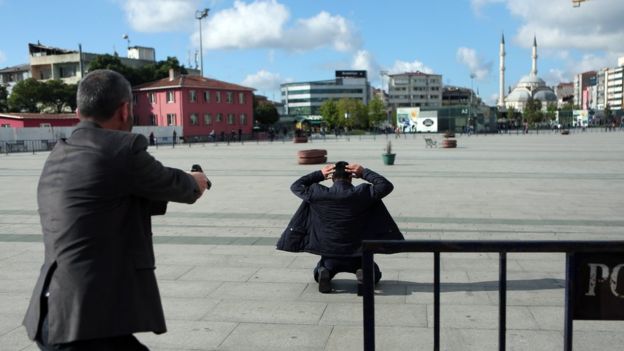 An assailant has tried to shoot the editor-in-chief of Turkey’s Cumhuriyet newspaper Can Dündar, before the court was to announce the verdict on his case, Reuters reported, citing witnesses. The paper had published reports implicating the Turkish government in having links with extremists.

The gunman shouted “traitor” before firing at least three shots at the journalist, an eyewitness told Reuters, adding that Dündar, who was unarmed, was not injured in the incident.

Reportedly at least one journalist who was covering Dündar’s trial was injured, however.

In the aftermath of the attack, Dundar described the incident in an interview to Ruptly as an “intimidation” that, he said,“won’t work on us” and “nobody should be worried about [the incident].”

“They are trying to sort things out in that way as they cannot do within the frame of justice,” the journalist added, explaining the underlying reasons for such an assault.

The assailant was subsequently arrested.

Dündar, 54, and his colleague, chief of Ankara bureau of Cumhuriyet, Erdem Gul, 49, stand accused of trying to topple the government, something they allegedly attempted to do in May 2015 by publishing a video purporting to reveal truckloads of arms shipments to Syria overseen by Turkish intelligence.

The Cumhuriyet report in May 2015 claimed that Turkey’s state intelligence agency was helping to transfer weapons to Syria by trucks.

Both Dündar and Erdem spent 92 days in jail, almost half of that time in solitary confinement, before the Constitutional Court ruled in February that their pre-trial detention was a violation of their rights.

President Recep Tayyip Erdogan repeatedly stated that the trucks really belonged to the MIT intelligence agency, but were carrying aid to Turkmens in Syria, who are fighting both Assad’s forces and Islamic State (IS, formerly ISIS/ISIL).

The journalists remain under judicial supervision and are banned from leaving the country, according to the state-run Anatolia news agency.

Their detention fuelled criticism from international human rights groups, as well as from the EU. US Vice President Joe Biden said that Turkey was setting a poor example for the region by intimidating the media.

The journalists’ arrests and trial prompted numerous protests across Turkey.