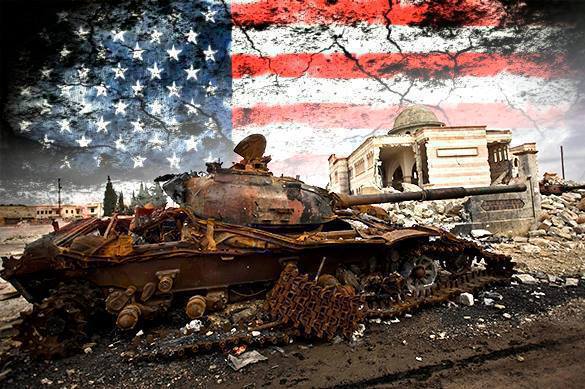 … from Pravda,  interview with Viktor Sergeyev, Director of the Center for Global Issues, Institute for International Studies (IIS), MGIMO University,

New Russia-US agreements on armistice in Syria were put into force on 12 September. It was supposed that after a week of armistice regime a Joint Executive Centre will be created, which would allow the US and Russia to coordinate strikes against Jabhat al-Nusra, the ISIS, and other groups, but the structure has not been created.

Was such plan realistic? And why hasn’t it been revealed so far? Viktor Sergeyev, Director of the Center for Global Issues, Institute for International Studies (IIS), MGIMO University, told Pravda.Ru about it in an interview.

Was it a breakthrough or a common tactical step?

It’s a breakthrough in relations of Russia and the US, at most. The end of war in Syria will hardly take place in such a way, as there is still serious uncertainty on who will be defined as terrorists. And Turkey hasn’t decided on it either, which is very significant.

It’s also unclear whether Turkey will close its border for fighters, who fight around Aleppo. Because there are about a dozen and a half of fighting parties, taking into account all the armed units. And the agreement concerns only two banned groups in Russia, these are the ISIS and Jabhat al-Nusra. All the other are up in the air.

Meanwhile about a dozen of various fighters’ groups are currently being encircled in Aleppo, and not all of them belong to those mentioned in the agreement. That is why the agreement is still kept secret. Some decisions regarding who and where should be placed were made. But the US doesn’t want to reveal it, as it’d place it in a very difficult position regarding those combat groups they patronize.

Why don’t they want to change their opinion on these fighters? Do these groups have any influence on the US leaders?

The case is that the Americans use them as a tool against Bashar al-Assad’s government and don’t want to lose this tool. That is why they haven’t wished to determine their stance for half a year so far. Because if this issue is clarified, political settlement may follow it.

And these groups of fighters, who are patronized by the US, do not want to have this settlement in any case. It means war will be continued. And the Americans do not want to admit it.

Which is the difference between Jabhat al-Nusra and other terror groups, that are called moderate opposition by the US?

There’s almost no difference. But the case is that officially it’s part of al-Qaeda, which struck the twin towers in New York. The US cannot but recognize al-Qaeda a terror organization and fight against it. The IS is an obvious enemy, one should certainly fight against it. Other fighters may be recognized as moderate. They are not so popular and it it’s not known that they took an oath to the ISIS, they may still use the US support, get weapons and reinforcement. Fighters are arriving there constantly.

Our authorities, Sergey Shoygu in particular, used to talk about these agreements as early as in May, that it’d be a real breakthrough, that we would at last fight together. How do you think, do politicians and the military have a clear plan?

I’d suppose no. They are not sure that cooperation with the US will be very clear, logical and accurate. A 7-day armistice preceded the cooperation itself with the US not without reason.

Only after that they planned to create some joint group. It means the negotiating process will be incessant.

But it’s a breakthrough for the US-Russia relations, as before that the Americans didn’t wish to recognize equal status of Russia in Syria at all. Now they have to admit it, thus, we are so-called allies.

It seems to be a US concession. But which are our obligations?

Our compromise is that we agreed not to bomb whom we like. That is we won’t bomb those whom regard terrorists. And the situation in Aleppo approaches a catastrophe for these groups. They are encircled.

Suspension of the military acts when the Syrian army had just carried out a successful offensive and encircled them is a very serious concession. And it will certainly allow those encircled groups to get some additional support (money and equipment) and to have some respite. So, that’s the compromise.

We’ve agreed that one more corridor will be opened, and the Syrian army won’t bomb it. Maybe fighters will even get possibility to escape.

Maybe. Those who don’t want to sit in this poke, will get possibility to leave. But where will the go? They may continue fighting against Assad’s government again.

And what’s in the Russia-Turkey compromise in Syria?

It’s a difficult case, because all the relations between Russia and Turkey are interconnected here. After our bomber had been downed, we cut every relation with Turkey. Nonetheless, embargo and absence of tourists took effect. Turkey found itself with no money and had to apologize and change its stance radically.

Nevertheless, in politics a stance may not be changed at once. It’s political course and some pieces have remained. Ankara still helps the Syrian rebels, after all it turns a blind eye to it. I believe the Turkey-Syria border is still quite transparent.

But there is some progress. Putin and Erdogan might have agreed on the closed border. But this can be implemented only under agreement of the executives, i.e. the Turkish military.

The stance of them is not clear. An attempt to carry out a coup d’etat has been made recently and there are still a lot of people who will help fighters. How can you control some officer, who heads a border guard detachment at the Syrian border? It’s difficult.

Thus, penetrations will be still taking place, but not on such scale. And gradually this way will be blocked, which will finally undermine combat readiness of the forces, that fight against Assad.

What could Putin promise to Erdogan?

It seems that apart from return of the Russian tourists in Turkey and Turkish food to the Russian market, it is connected somehow with relations of the Turkish government with the Kurds. I believe we have firmly promised not to support Kurds, who are in the territory of Turkey.