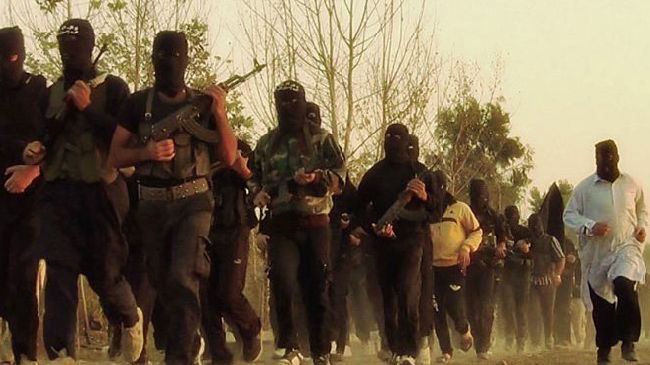 [ Editor’s Note: VT has long editorialized about the ease with which jihadis can move around the world, going into and out of conflict zones as if on their private magic carpets, quietly donated by an “ET” NGO.

For the rest of us, we are under constant surveillance, to the point where Homeland Security will fly a whole team into Detroit airport for what they thought was going to be a treasure trove of Intel, via their five-hour grilling of Gordon Duff.

All they got is the opportunity to go through all of his German vacation photos and videos, hundreds of them, all time- and date-stamped, which prove he was not training IS snipers in Syria or Afghanistan. And of course, the taxpayers footed the labor bill on this fiasco.

Boko Haram is miraculously able to secure the use of satellite phones — very hard to get without major ID and a traceable payment schedule — normally leaving behind a bread crumb trail that should have drones raining down on them, to the extent that getting a satellite phone would technically be deemed a form of suicide.

Yet, VT does not find anyone in Intelligence, investigative media, or politics who is the slightest bit curious about such anomalies, despite their being the flashing neon light kind. When we query professionals about this, we can tell with rare exceptions that the issue has never entered their minds before.

It’s like they have a DNA-activated “no go” survival instinct that renders them dumb, blind and stupid, whenever it’s in their best interest. This orchestrated failure of not asking the right questions is carved in stone in the history of the War of Terror; and what a hoax it has been, as to who has primarily been running it and why.

Gordon will tell you the rest, in his own special way, his good deed for the day… Jim W. Dean ]

The game is called chaos theory. The goal is destabilization, putting the world “in play.” The tool is sexual frustration driven by cultural bias and economic hardship, put in play by the CIA to move literal armies of young Islamic males around the world.

Those not being sent as jihadists for ISIS or the oft rebranded “moderate” mercenary surrogate armies, now flood the cities of the world where carefully orchestrated press, staged incidents, false flag terrorism and a very real social disaster is radicalizing fearful Americans and Europeans, driving them to political suicide. None of this is an accident.

To the CIA and other agencies that are run by social scientists with excessive moral flexibility, all conflict is good, an agent for change and all change can be controlled, directed and managed.

Agents of change are typically terrorism, political strife, poverty and, less well known, sex. You see, the current agent of chaos, the one dominating the world scene is testosterone, the drive for “coupling” by the endless population of young males willing to uproot themselves from hopeless lives and go wherever they are directed for whatever task is put in front of them.

All that is required is the promise of sex and maybe hope for a life of some kind even if the work is tyranny and beheadings.

The author of these migrations, mostly Islamic males, is the CIA, MI6 and the Mossad along with France’s DGSE. Intelligence agencies are agents of change “on the cheap” and operate best when governments fall, when alliances crumble and when social unrest festers and erupts into open conflict.

Here, the “masters of the universe,” the Washington and Tel Aviv think tanks, the self-proclaimed geniuses of Whitehall, themselves no more than jackals serving an unseen master, manipulate the world with Twitter and Facebook. There is a wonderful efficiency to social media, anonymous, deniable, cheap and dirty, oh so very dirty.

In America, it is done from Ft. Huachuca, Arizona, the US Army Intelligence School. There every Arabic dialect is known, every social network penetrated, the word is put out:

“German women are all whores, you can simply rip their clothing off and have your way with them. German authorities are cowards, the German people weak and best of all, the German government will pay you to live like a king and you never have to work.”

The Israelis, working closely with their Saudi and Turkish friends from centers staffed with unemployed housewives, have their own version, one that plays well from the Philippines to Africa’s Sahel, one that has brought a hundred thousand or more from obscure villages to the battlefronts of the Middle East:

“Come to Syria and Iraq, join ISIS. Travel across the world, from airport to airport, no visa, no tickets, you will move across the world like magic, to a world where all is yours, any woman you want, any boy, protected by the US Air Force, paid by Saudi Arabia, rape, murder and steal and when you are done, you can live in Paris or Frankfurt or Stockholm.”

And they do move as though by magic, some 8000 miles or more, through the most secure airports of the world, across impenetrable borders, fed, clothed and protected, paid, armed and furnished with wives from among the tens of thousands of sex slaves who live in agony and thrall to the CIA and her sister terror groups who, as more and more accept, are ISIS and every other terror group on the planet.

They are called “Non-State Actors,” typically armed (ANSA) and are cataloged by Geneva Call, a Swiss group that lives in heady denial of the reality of our time, that ANSA’s are surrogate armies that act as agents for destabilization on behalf of world organized crime, also known as the “global economy.”

What we are addressing today is the sexual component of “war on the cheap” and how human biology makes this all so easy. It is no secret that young men are vulnerable to bad decision making. In males, or so we are told by social scientists, the cerebral cortex doesn’t develop properly until well into the 30s.

When you add to this certain tenets of Islam, the seemingly overt demonization of sexuality outside marriage and the many controversial interpretations of the Koran that allow rape, then you have created a powerful message. Further exacerbating the issue is the high birthrate, always inside legal marriage mind you unlike in the West, that Islamic countries enjoy, that and the crumbling economies.

Place this is a social subtext of sex within marriage only when the population is entirely Islamic, as is so often the case, and little hope of achieving the required economic status that would allow sex within marriage and a certain desperation ensues.

Place a few I-Phones around, load up social media with tales of sex parties in Manjib and Mosul, of fat Saudi paychecks sent home to needy families, of heroic war against the West and recruiting jihadists is an ease. Little do they know they are working for Israel or Washington or London or Paris, as they are all the same anyway.

Behind this put a supporting mechanism that controls the world’s airports through companies like Israel’s ICTS and the global terror databases that seem to allow only terrorists to travel without being questioned, and it all comes together.

There would be no terrorism, no “war on the cheap” without phony charities, and most charities are just that.

Then you have the world press, the Reuters news agency, the Syrian Human Rights Observatory, BBC and Guardian, all secretly bought by drug profits from Afghanistan, fed by CIA contracting companies like Booz Allen Hamilton and Google Idea Groups, and it all starts to come together.

It isn’t just Syria and Iraq, not just Africa. The refugee crisis in Europe, the crisis that has already destroyed Europe as more and more admit each day, is just another stage.

In the US, the current election process, a purely theatrical expression with no democratic aspects whatsoever, now is heavily backdropped with “Islamization” scare tactics.

Each day every American receives emails linking to YouTube videos showing gang rapes across Europe and promising that this will come to America unless the right candidate is supported. The emails all trace down to Washington think tanks closely aligned with the Israel lobby of course, but few look and fewer care.

Add to this an endless stream of carefully staged events, shopping center knifings, school shootings, car bombings, too many to be believable, often with perpetrators whose history leads back to intelligence agency contacts or suspicious psychiatric treatments, but this is another subject for another time.

Can you hire an army with a handful of “tweets?” Sure you can. Can you uproot millions with the promise of sex? We’ve seen it done? Is it all part of a plan? We know it is.