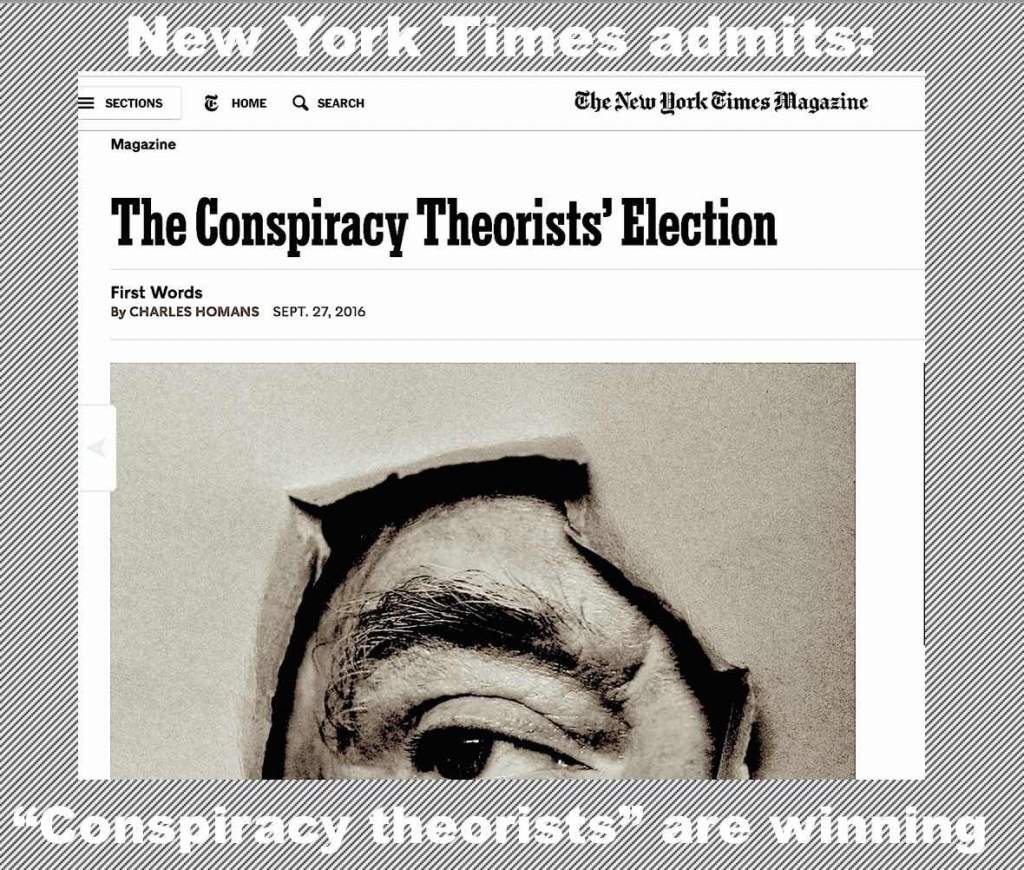 According to the New York Times, this is “The Conspiracy Theorists’ Election.” 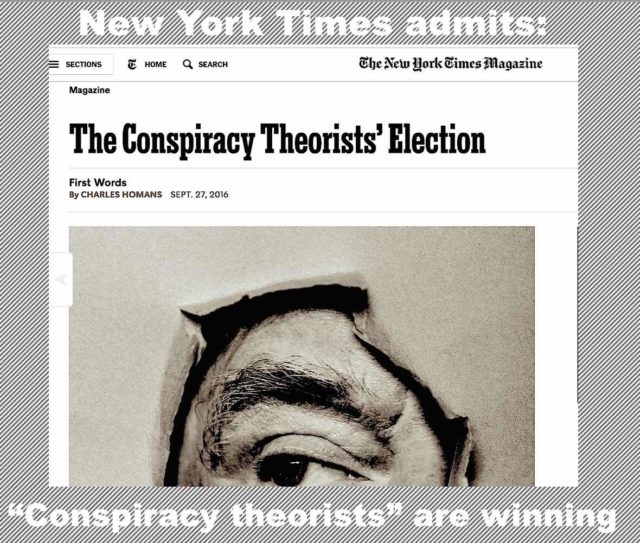 The Times meant that as a slam on Donald Trump. But it’s really an admission that we – the “conspiracy theorists,” i.e. people who don’t trust psychopaths in power – are winning.

We, the free thinkers, the awakened, the serious skeptics, the people of the red pill, are the real winners of last night’s debate.

The corporate media insists that Hillary won. But more and more Americans don’t believe a word they hear from the corporate media. The more the media tilts toward Hillary, the more it looks like the fix is in.

To me, and to millions of other awakened Americans, last night’s debate looked like a contest between two moderately talented bullshit artists.

Trump’s BS is blatant. Read a transcript of what he says. Most of it makes no sense whatsoever. Aside from his occasional blurt-outs of forbidden truth, The Donald is just a big, bloated gasbag tooting out vague, flatulent generalities. He’s good at it, though. Let’s grant him that.

It’s hard to say which candidate is more dangerous.

Trump’s prickly ego is obviously out of control. I could see him as Rufus T. Firefly in Duck Soup, starting a war over imagined personal slights.

Worse, Trump looks like the kind of guy who could be easily manipulated by the neocons: A perfect “gentleman” frontman for the Straussian “philosophers.” People with thin skins and out-of-control egos are easy for sophisticated operators to handle. Guys like Trump have plenty of buttons to push. The neocons could probably get their avidly-desired war on Iran, maybe even World War III, by playing Trump they way they played George W. Bush after their coup d’état on 9/11.

Trump says the whole reason he’s in politics is that he hates Obama’s nuclear deal with Iran. He kisses Bibi Netanyahu’s behind, grovels before AIPAC, and wants to sink any Iranian boat whose sailors might be thumbing their noses at Americans.

In short, Trump is going all out for war with Iran.

Trump has also repeatedly declared war on the entire Muslim world. On top of his incessant, blathering Islamophobia, he now says he would recognize Jerusalem as the capital of Israel – an utterly insane position, flying in the face of unanimous international opinion and international law, putting the US in the cross hairs of anybody who doesn’t appreciate the genocidal Zionist entity’s bloody desecration of what has been Muslim-administered holy land virtually ever since Islam has existed.

There is no meaningful “Islamic terrorism” in the USA today. All of the high-profile attacks have been Zionist-sponsored inside jobs, and even counting those, you are more than ten times more likely to die in your bathtub or be hit by lightning than be killed by a “terrorist.”

But if a US president ever recognizes Jerusalem as Israel’s capital, intelligent and courageous Muslims (and non-Muslim Palestinians and sympathizers)– people capable of creating and using formidable weapons – will be highly motivated to do so…and their cause will be just, and viewed as such by most of the world. Trump, and his master Bibi, are playing with fire.

Is Hillary any less dangerous? Not really. The neocon-dominated Establishment she represents is gearing up for World War III. Her Putin-baiting and support of regime-change operations all over the world make Donald “I like Putin” Trump look like a peacenik in comparison.

Trump is an empty suit, Hillary an empty pants-suit. Both are just blathering. All of their sound and fury signifies nothing in the face of looming neocon-orchestrated Armageddon.