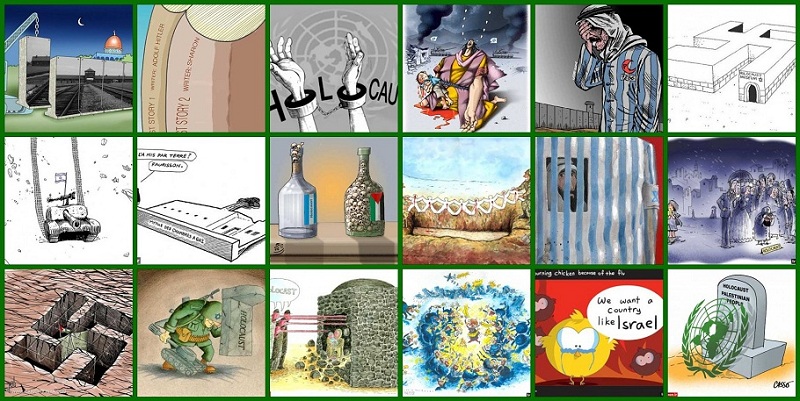 “East is East
and West is West
and never the twain shall meet.”

In the West – Europe and the temperate lands it genocidally colonized and settled – most people believe that six million Jews, and uncounted others, were systematically exterminated, mostly in hydrogen cyanide gas chambers, by the government of Nazi Germany between 1942 and 1945.

In the East and South – those lands victimized by European imperialism and colonialism where the victims survived in considerable numbers – the great majority does not believe in “the Holocaust.” 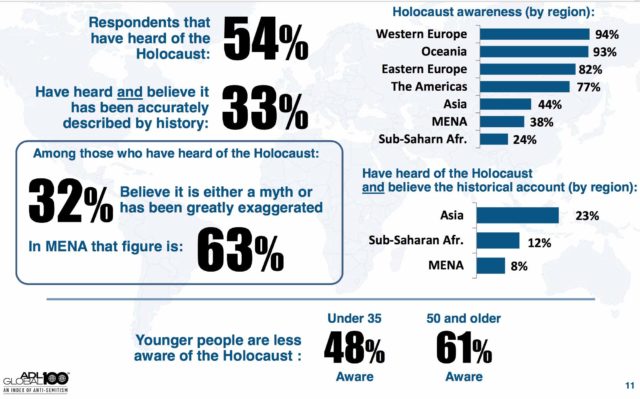 The above figures  from the ADL’s Global 100 survey show that only about one in five Asians – and one in ten Middle Easterners and Africans – knows of and believes in “the Holocaust.”

For the story of how I was forced to confront this issue, see my article: Holocaust History Denial: A Clear and Present Danger

I first became aware of this “Holocaust gap” when I lived in Morocco doing Ph.D. research on a Fulbright scholarship in 1999-2000. My Moroccan colleagues, whether professors or graduate students, sometimes brought up questions like: “What do you think of Robert Faurisson?” I soon learned that Faurisson, who is reviled as a “Holocaust denier” by mainstream Western institutions of power, is an intellectual hero in Morocco – and, as I later learned, the rest of the Islamic world.

No matter how strongly you may disagree with Faurisson and his vast following of North African and Middle Eastern admirers, you must admit that we live in a wildly diverse world in which conflicting beliefs and historical interpretations must coexist, at least until free and open debate leads to consensus.

If Moroccan universities made agreement with Faurisson a litmus test for admission and employment, we North Americans would rightly complain. Yet we are blind to the disgust we evoke in the vast majority of MENA intellectuals by our own refusal to allow Faurisson and those who agree with him to state their actual beliefs, and present their cases, in the North American and European academies.

As I write this, Professor Tony Hall of the University of Lethbridge is under attack by a criminal conspiracy of slanderers and false-evidence-planters who have absurdly framed him as a “holocaust denier.” These individuals appear to have manufactured a hideous “kill all Jews” image, then arranged to have it planted, unbeknownst to Professor Hall, as an obscure comment on his Facebook page. After manufacturing and planting the offensive image, they appear to have conspired with Facebook to have FB blatantly violate its own guidelines by initially refusing to take down the image – a refusal that allowed B’nai Brith to manufacture a scandal.

Since it has emerged that Professor Hall’s detractors, rather than Professor Hall, appear to have manufactured and disseminated the offensive image, they have had to resort to a fallback attack. B’nai Brith Canada, the leaders of the anti-Hall lynch mob, just published an article headlined “Academic Freedom Does Not Include Holocaust Denial.” They label/libel Hall as a “holocaust denier” because, they say, he is “a staunch advocate of launching an ‘open debate on the Holocaust’.”

How is being an advocate of “debating” an issue equivalent to “denying” it?! The claim is self-evidently absurd. The obvious implication is that it is B’nai Brith, not Tony Hall, that doesn’t believe in the holocaust, since they apparently believe the official Western version of the story will implode if debate on it is ever allowed.

In commenting on Menuhin’s Holocaust-denial book Tell The Truth And Shame The Devil, Hall explained, “So, I’m reading that text and having to reassess a lot of ideas.” He went on to say that the book is a “very dramatic re-looking at what happened in Europe in World War Two.”

How is “reassessing ideas” equivalent to “denial” of anything?! Farber, like B’nai Brith, seems to believe that anyone who reads Menuhin’s arguments, and is open to “re-assessing ideas” when exposed to new evidence, will automatically become a “holocaust denier.” So ironically, it seems that the defenders of holocaust orthodoxy are actually closet holocaust deniers! They appear to be terrified that the official Western narrative is so flimsy that it cannot stand even the merest hint of critical scrutiny. What else could possibly explain their behavior?

These Zionist lobbyists are apparently so convinced that the holocaust narrative is fraudulent that they not only feel the need to destroy the reputations and careers of anyone who questions it, but actually make such questioning illegal – and send revisionist historians to prison!

According to Nick Kollerstrom, thousands of people have been prosecuted for “holocaust thoughtcrimes” in Germany alone. The first people who should be imprisoned, I submit, are the Zionists who pushed through these laws – because the fact that they feel the need for these laws proves they do not actually believe in the historicity of the holocaust, and are therefore “holocaust deniers” themselves. If they actually believed what they say they believe, they would obviously be eager to clobber their opponents in a free and fair debate…not with criminal charges and imprisonment.

In fact, I would go one step further, and assert that anyone who charges anyone else with “holocaust denial” must themselves be a “holocaust denier.” If they actually believed in their version of the holocaust, they would not feel the need to resort to name-calling. Instead, they would muster empirical arguments and evidence.

The rest of the world thinks the West, with its “holocaust denial” obsession, is completely insane. After all, the rest of the world knows that the biggest holocaust of all time has been the Western holocaust of non-Western peoples. For an introduction to that subject, one could do worse than read Professor Tony Hall’s books Earth into Property and The American Empire and the Fourth World. Other key sources include Vltchek and Chomsky’s On Western Terrorism, which documents the 50 to 60 million people murdered by the USA’s CIA and military interventions since World War II; Alfred Crosby’s Ecological Imperialism, which covers the past millennium of Western planetary genocide and ecocide; and Sven Lindqvist’s “Exterminate All the Brutes”: One Man’s Odyssey into the Heart of Darkness and the Origins of European Genocide.

Read these five books, and you will understand how “the holocaust” looks to a non-Westerner.

No wonder they don’t believe Western mainstream “victors’ history.” The West cranks out  outrageous lies to disguise its own crimes. Why should World War II historiography be different?

Because they start out as natural skeptics, approaching the holocaust debates with a jaundiced eye, non-Westerners are likely to avoid being swept away by mass-media-orchestrated Hollywood-style emotions and that drive the Western mainstream narrative. Because they have so much emotional distance from the Western history of persecutions between Christians and Jews, non-Westerners can think dispassionately about such things. And because they have seen the outrageous lies the Zionists have used to construct “Israel” (a euphemism for “genocide in Palestine”) they are naturally skeptical about any and all self-serving Zionist assertions.

If the University of Lethbridge expels Professor Tony Hall, it will either have to (1) ban all students and professors from non-Western nations and/or backgrounds, especially the MENA region and the rest of Africa, or (2) force all people from non-Western backgrounds to sign a statement that they will never express their true beliefs about “the holocaust” while they are working or studying at the University.