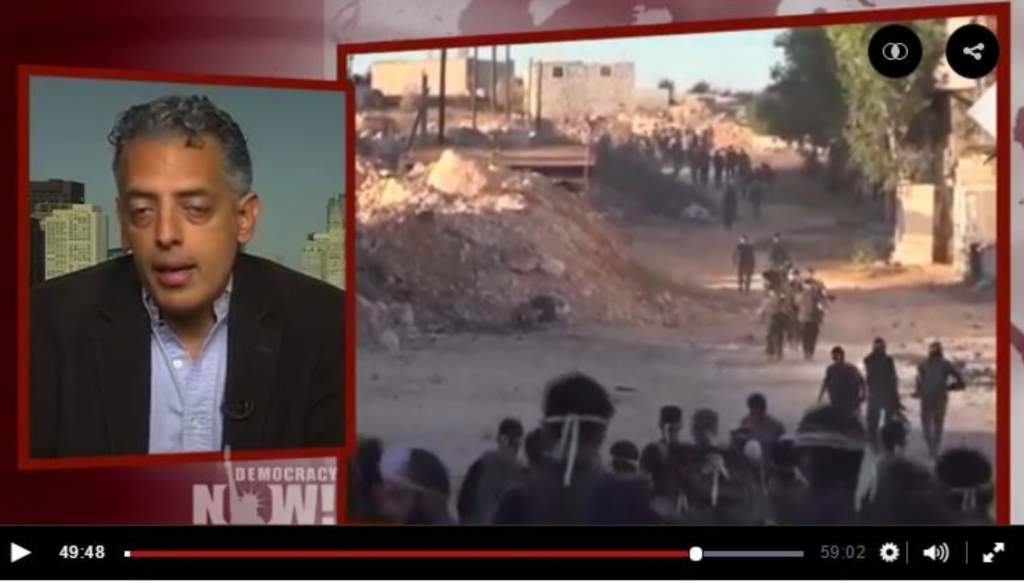 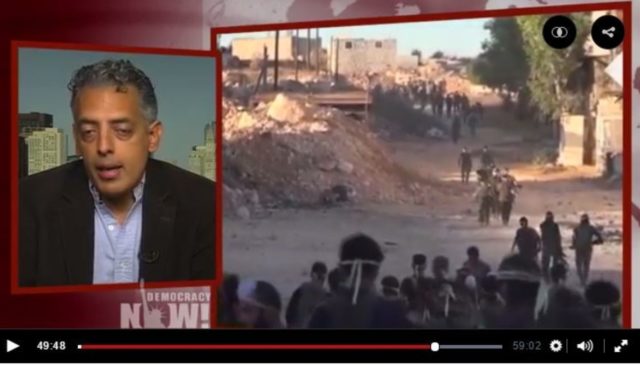 by Ann Diener for Veterans Today

With no discussion that Eastern Aleppo is a terrorist stronghold, Democracy Now had Professor Yasser Munif on this morning attempting yet again to propagandize the “alternative media” about the conflict in Syria towards the goal of divide and conquer of a secular, Middle Eastern country.

The segment even featured video from the “War diary” from AMN, where viewers saw conflicting messages, Yasser Munif on camera discussing supporting the opposition in Syria while seeing Daesh on the ground in the background. Perhaps this was the most accurate depiction of the broadcast, and what we will get based on our current level of propaganda, more Daesh, more divide and conquer and more conflict.

This segment this morning is much like coverage that is being shown on every major media outlet in support of the enemy we are supposedly fighting against, Daesh.

While his stance on the “opposition” and those in civil society rebelling against an “oppressive regime” is appealing to Democracy Now viewers, they neglect to mention the full scale terrorist operation going on in Eastern Aleppo, where the rebels as seen in the background video, are aligned with terrorists who would be happy to bomb or kill Westerners, as they have recently said directly to US Special Forces.

These are not people with laptops working on democracy building, these are radical, brainwashed, Islamists, paid for by radical Islamists and now supplied by the West through the “Free Syrian Army.”

It is interesting that Democracy Now did not have anyone on from the US Peace Council that recently visited Syria on to discus their views on the conflict.

Henry Lowendorf of the US Peace Council said while speaking to the UN,

“We are fighting a mass of propaganda that has demonized the Syrian government, demonized its leaders, an effort that precedes every other intervention that the United States has made over the course of many, many decades in order to convince people that its OK for humanitarian reasons to overthrow a government and to replace it with what ever the United States prefers, a government that is not independent, that is a willing participant in whatever US policy is.”

Amy Goodman has become part of this propaganda machine and is now controlled opposition. What does she think will happen in Syria, if the Syrian Government and Russia do not win the war? It is clearly seen in the background who will take over.

It will be an Islamist Caliphate with its eyes on the West. This divide and conquer strategy has been a goal of the Messianic Likudist faction, to create both Greater Israel and a radical Caliphate from which to operate from.

With all of the focus on Syria today, would it not be better for Democracy Now to question, rather than support the mainstream narrative? This is her “Iraq war” as nothing is said about Eastern Aleppo and who is on the ground. One thing is known, that it is clearly seen in the background of the video.

Thinking about this in depth, if Daesh was to win in Aleppo and Syria, and then use Syria as a base of operations, the mainstream media, the UN, the US government and Democracy Now could be said to provide support to this conclusion and hand victory to Daesh.

Who is going to stop the radical Islamists? The civil society activists or the US military, that is already providing them with arms through the “Free Syrian Army” that can in the future be used against the US military?

Before Russia entered the conflict, we can see how well the US performed against Daesh in this video. It is clear the captured huge amounts of territory. We have not stopped them, as they still appear in the background. Goodman and her colleagues continue to push for this divide and conquer in Syria rather than seeing the story on the ground as a real story of sovereignty in the face of extreme pressure globally to become a radical Islamist base counter to Greater Israel.

The Caliphate then will probably be attacked to kill more Arabic people and radical jihadis will penetrate Europe and US to kill westerners. The war machine will have a consistent power base and profit stream without the fear of peace looming in the background.

“that while the Unites States would like to divide the Syrians up by religion or within a religion, by the different beliefs within that religion, there wasn’t a Syrian around who would accept that. We spoke to the Grand Mufti and he said people ask me how many Muslims there are in Syria and his response was always 23 million, that’s the population of Syria and when we talk to the bishop of one of the Orthodox churches, he answered the same thing, ‘the number of Christians is 23 million.

Why is Democracy Now supporting this Messianic plan?