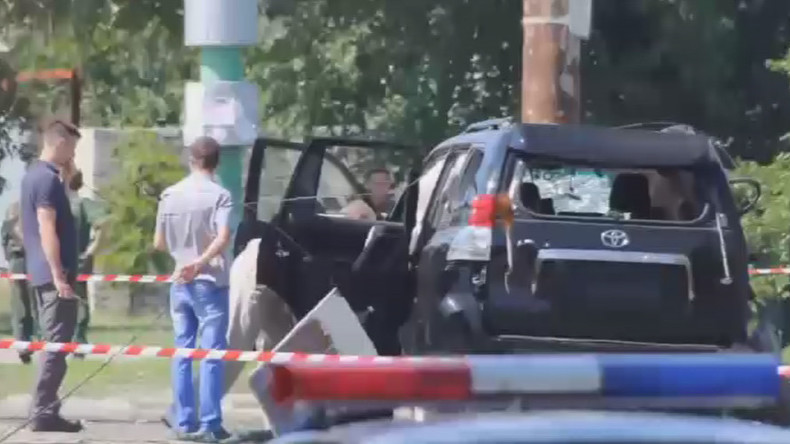 [ Editor’s Note: Western media gave no coverage for the coup that was broken up against the Lugansk Republic in Donbass. It had been preceded by an assassination attempt on its leader, Igor Plotnitsky. This was a car bomb attempt, which to his good luck was bungled, most likely as a result of assigning it to the lowest bidder.

Political assassinations are usually not attempted without having someone, or a team, ready to step in and take over. These could be outsiders, but using insiders is safer, as they are seen as a natural progression of leadership. But that is not the case if they have sold out for power or money.

The buyers of such treason could be oligarchs fronting for Kiev, or as  mentioned below, gangsters who were not happy with their anti-corruption leader — a universal problem for all honest politicians, and more so in struggling economies.

You can bet that Plotnitsky was looking over his shoulder when he got out of the hospital, and, with some possible help from the Russians to watch his back and working with his own teams, flushed out the coupmeisters, in what looks like an excellent display of good police and counterintelligence work.

VT wishes Mr. Plotnitsky and his team god speed, and to wear their hair short, as eyes in the back of your head really appreciate that… Jim W. Dean ]

The LPR head’s advisor, Gennady Tsypkalov, upon being arrested on charges of attempting a coup d’etat in the republic, has committed suicide. The deputy corps commander, LPR People’s Militia Colonel Kiselev, and several officers of the LPR’s People’s Militia, politicans, and civil officials, have also been arrested.

This was announced today by the head of the Department on Supervising the Observance of Laws in the Military Sphere, LPR, General Prosecutor Sergey Rakhno.

Earlier, Rakhno reported that the LPR’s General Prosecutor’s Office had launched a criminal case on the attempted seizure of power in the republic. In connection with the coup attempt, the head of the LPR, Igor Plotnitsky, called on the republic’s citizens to be vigilant and not succumb to Kiev’s provocations in trying to destabilize the situation in the LPR from within.

“Over the course of investigations, a preliminary number of persons was revealed including those who, during repeated meetings over the course of 2014-2016, agreed to implement the scenario of overthrowing and physically eliminating the republic’s leadership in the face of the republic’s head, the ministerial council’s leaders, the National Council, and the republic’s security structures, then to be occupied by certain persons,” Rakhno reported.

General Prosecutor Rakhno has reported that one of the People’s Militia’s leaders, Kiselev, was arrested and then offered enlightening confessions on those involved in planning the coup. He has been put under house arrest on court order.

Also arrested was the LPR head’s advisor Tsypkalov, whose cooperation in today’s investigative operations led to a confrontation between him and the detained Kiselev. Given information obtained that other participants of the conspiracy are attempting to murder the detained conspirators, the arrested have been detained in one of the LPR government’s administrative buildings.

Last night, the arrested Tsypkalov, having realized the depth of his criminal actions and the physical danger facing him for informing on other persons involved in the conspiracy, committed suicide by hanging himself.

The former chairman of the National Council of the Lugansk People’s Republic, Karyakin, is now wanted on charges of committing serious crimes and his involvement in the coup attempt. When law enforcement officers attempted to arrest him, he wielded a personal gun and fled.

“It must be noted that the motive for committing such a criminal plan was admitted by the arrested and other persons to be a reaction to actions taken by the LPR head and operating government agencies on suppressing corruption and criminal schemes related to a ‘protection racket’ of illegal business activities, including smuggling in the republic.”

According to media reports, Denis Kolesnikov, the head of a National Council committee on numerous regulatory policies, was also arrested today.

Media have also reported that Kiselev was wounded during his arrest and is now in intensive care.