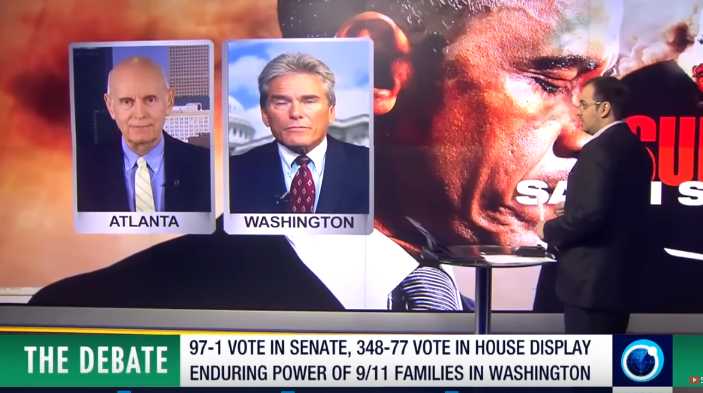 US law may end special relationship with Saudi Arabia: Analyst

[ Editor’s  Note:  Press TV featured this Debate Show on their front page this morning, always a treat because of the extra exposure. This Saudi Arabia lawsuit veto override was an historical ground breaking event that could unleash a wild, wild West deluge of both justified and manufactured litigation in the War of Terror.
–
How much classified material could be released is still up in the air as that is where all the executioners’ bullets lie. There are more than a few reports about the “Murder incorporated” that the War on Terror unleashed with a lot less controls on it than the public ever knew, compliments of the Bush gang thugs coming in behind the real 9-11 perpetrators.
–
What the public still has not figured out yet is that 9-11 is still an ongoing crime, the biggest in history and yet its response is at the level of someone who has been hypnotized to black out a painful trauma.
–
The 9-11 event has turned into the biggest challenge to our freedoms when a children’s coloring book version of what happened found its way into the permanent record that is patently false at first glance, and yet all of America’s institutions just rolled over on it, the entire civic infrastructure of a country literally abandoning itself in time of war.
–
It still all seems like a bad dream. VT has done a steady stream of briefings with people and entities that the public would think would have stepped up to the plate to fight for the truth of what really happened. But other than the few rare exceptions, all we get is the 1000 yard stare, the shell shocked version of WWI veterans of the horrible trench combat.
–
We are grateful to Press TV’s giving us the opportunity to keep rubbing this in the public’s face. We have nothing to lose but what little we have left after getting raped and pillaged by the 9-11 gangsters who are still laughing at how stupid and pitiful we were to take it all laying down. We will never stand down on 9-11… JD ]
____________

Press TV has conducted an interview with Jim W. Dean, managing editor and columnist with the Veterans Today from Atlanta, and Michael Lane, president of the American Institute for Foreign Policy from Washington, to discuss a new anti-Saudi law.

A recent decision by US Congress to override President Barack Obama’s veto of legislation that allows victims of the September 11, 2001 attacks to sue Saudi Arabia is set to lead ties between both countries to a “rocky road,” Dean told Press TV on Thursday night.

“If the Saudi kingdom goes mad, it may leak information about the US involvement in aiding and abetting terrorism in the Balkans and the Middle East,” he said.

On Wednesday, US senators voted 97-1 in favor of the “Justice Against Sponsors of Terrorism Act (JASTA),” which was vetoed by Obama last week. Only Senate Minority Leader Harry Reid,

Dean ruled out Saudi Arabia’s threat to sell billions of dollars in US assets, saying the Saudis are bluffing because “they really cannot liquidate their whole money in the United States.”

“If they start to pull out their assets from the US, the kingdom’s own economy will suffer much.”

According to Dean, the neglected issue which has not been addressed after the 9/11 terrorist attacks is that the US lost several trillion dollars and the American people also lost a lot of their freedoms as a consequence of the incident.

“The big concern is you would never ever have countries like Saudi Arabia get involved in a 9/11 type project with 15 of their own nationals involved,” he said.

“No country would be so stupid as to use their own nationals in an operation like this,” Dean added.

He also cautioned that the United States, its citizens and defense contractors, could be subject to legal cases in other countries for their wrongdoings against people overseas.

Also speaking in Press TV’s “The Debate” program, Lane said the US Congress decision has “opened up the entire world to this kind of lawsuit when terrorism is involved or alleged to be involved.”

“This has the potential for other countries around the world to retaliate against the United States and we can find ourselves and individuals in court in foreign capitals as a result of this defending ourselves against charges both accurate and perhaps not so accurate.”

He said the ratification of JASTA seems to push the United States and Saudi Arabia to the “end of the special relationship” which exists between them.

Saudi Arabia’s Foreign Ministry condemned the passage of the US law, calling it a matter of “great concern” in a statement on Thursday. Before the passage, Saudi Arabia had threatened to sell off $750 billion in American assets if it becomes law.

Of the 19 hijackers that allegedly carried out the attacks, 15 had Saudi Arabian nationality and available evidence suggests that some of them were linked to high-ranking Saudi officials.

Families of the victims spent years and explored all available channels to sue Saudi Arabia in US courts for any involvement in the assaults, which killed nearly 3,000 people. Riyadh denies any connection to the 9/11 terrorists.