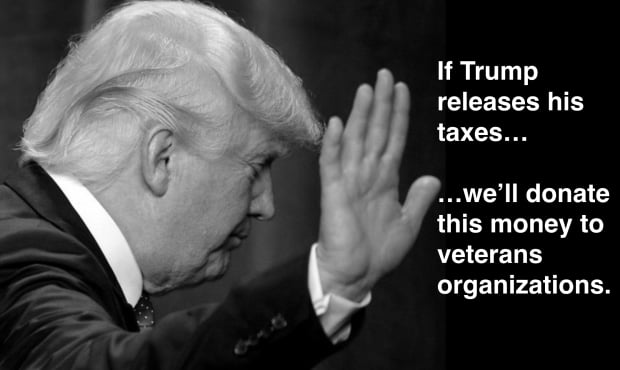 HUGE UPDATE: Reid Hoffman just pledged $5 million if we raise $1 million. This is crazy, please help me get to this goal – Let’s put as much pressure as we can on Trump to release his Tax Returns. $6 million going to Veterans Organizations seems like a good incentive to me!

Here’s Kiernan in his own words as to why he created this viral campaign;

Any service member who has ever held a security clearance has been subjected to a rigorous background check, including personal finances, affiliations, and drug activity, all for good reason. The nation entrusts its defense to this small group of talented and determined patriots, in return for this responsibility the nation asks for honesty and integrity. I believe that to be the Commander-in-Chief of this group, you should be held to the same standards.

This fundraising campaign will raise money for ten veterans groups. If Trump releases his tax returns all of this money will be donated to these organizations. Trump claims to love veterans, and so we’re asking him to put his money where his mouth is. These ten groups all support causes that I personally believe in and that best identify with the current generation of millennial veterans.

To be clear, raising and donating this money to veterans groups will not cost a penny to Donald Trump, just the release of his tax returns. So what do you say Mr. Trump, can you walk away from this deal?

If the conditions are met, your money will go to

Hope For The Warriors,Federal Charity

Team Rubicon’s mission is to unite the skills and experiences of military veterans with first responders to rapidly deploy emergency response teams.

The mission of Children of Fallen Patriots is to provide college scholarships and educational counseling to military children who have lost a parent in the line of duty.

Wounded Warrior Project is a charity and veterans service organization that offers a variety of programs, services and events for wounded veterans of the military actions following September 11, 2001

The Yellow Ribbon Fund helps recovering service members through various events and programs, arranged by staff and volunteers, aimed to help the patients and their families enjoy the community.

Helps fund education for the children of the fallen SEALS, Green Berets, and other special operators.

No One Left Behind