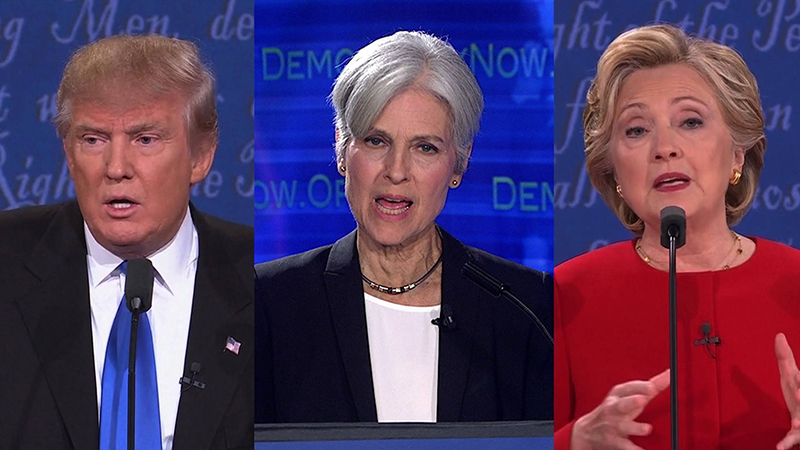 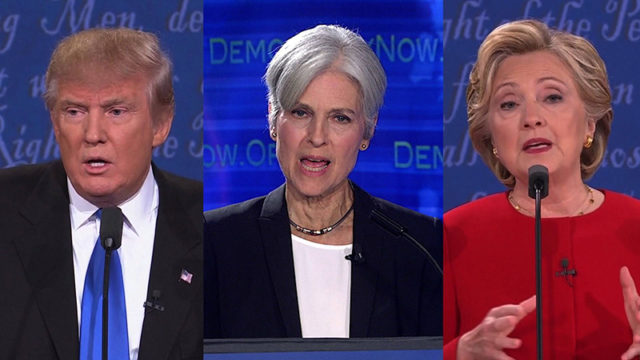 The true progressive voice that should be heard in the 2016 sham Presidential debates is Jill Stein who through the magic of video and the assistance of Amy Goodman joins the debates as the only true progressive and anti-establishment voice of the people and instead of throwing mud offers concrete political proposals and solutions versus the political posturing of a deeply tarnished Clinton and the incompetent bullying of political pretender Trump as well as a vivid glimpse of what could have happened in a true democracy: Allen L Roland, PhD

The truth about American politics is this: disguised by the theatrics of squabbling Democrats and Republicans, Washington governs according to limits prescribed by a fixed and narrow consensus. The two main parties collaborate in preserving that consensus. Doing so requires declaring out-of-bounds anything even remotely resembling a fundamental critique of how power gets exercised or wealth distributed.’  ~ Andrew Bacevich

Donald Trump and Hillary Clinton faced off Monday night in one of the most anticipated debates in U.S. history. The debate was held at Hofstra University on Long Island and moderated by NBC Nightly News anchor Lester Holt.

Throughout the 90-minute, often antagonistic, debate, Clinton and Trump sparred on everything from foreign policy to trade deals to personal stamina. But third-party candidates, including Libertarian Gary Johnson and the Green Party’s Jill Stein, were excluded from the debate stage under stringent rules set by the Commission on Presidential Debates, which is controlled by the Democratic and Republican parties.

For a more balanced approach, Democracy Now aired excerpts from the presidential debate and got response from Green Party presidential nominee Dr. Jill Stein in a special expanded debate ~ and she answers the same questions that were asked of Trump and Clinton and elevates the conversation in the process. But Stein also has the courage to ask the questions that others are avoiding such as the Five Separate Immunity Deals In the Clinton Email Scandal ~ see Jonathan Turley article;

HILLARY CLINTON: Well, I hope the fact checkers are turned upping ~ turning up the volume and really working hard. Donald supported the invasion of Iraq.

HILLARY CLINTON: That is absolutely~

HILLARY CLINTON: ~ proved over and over again.

HILLARY CLINTON: He actually advocated for the actions we took in Libya, and urged that Gaddafi be taken out ~ after, actually, doing some business with him one time.

JILL STEIN: So, this is another example of why we need to open up these debates, because mostly they are arguing ~ Secretary Clinton and Donald Trump are arguing about their record and who said what, when, and when did they take various positions. We’re not discussing the fundamental fact that we have a catastrophic failed policy of regime change, of a foreign policy based on economic and military domination, which is blowing back at us big time. If we want to have peace at home, we need to achieve peace abroad. And in the words of Martin Luther King, “Peace is not simply the absence of violence: It is the presence of justice.”

So, let’s look at our foreign policy. What have these regime change wars accomplished? They’ve cost us $5 to $6 trillion since 9/11, which comes out to about $50,000 per American household. Tens of thousands of U.S. soldiers have been killed and maimed, over a million people killed in Iraq alone. And what do we have for all of this? What we have to show are failed states, mass refugee migrations, which are tearing apart the Middle East and Europe, for that matter, and worse terrorist threats. They are not getting better. They only get worse with each turn of the cycle of violence.

So, we need a new kind of offensive in the Middle East, what we call a peace offensive in the Middle East. And it begins with a weapons embargo. Since we, the United States, are supplying the weapons directly or indirectly to all parties, all combatants on all sides, and we are the major supplier of weapons to the region, as well as around the world, it’s clear that we have enormous power here to initiate this weapons embargo and to work, in fact, with the Russians to achieve it also, because they, too, are paying a price that they cannot afford for these failed wars. In addition, we need to put a freeze on the bank accounts of those countries, largely our allies, who are continuing to fund terrorist enterprises. Hillary Clinton’s own leaked emails as secretary of state identified the Saudis as still the major funder, even many years after 9/11, still the major funder of terrorist Sunni jihad enterprises. We got this started. We can put it to a stop.

AMY GOODMAN: And that does it for Part 1 of our “Expanding the Debate” special. Many stations are running our full two-hour special. For those that aren’t ~ you can go to democracy now.

There is only one candidate who sounds and acts presidential and is representing the American people and not special interests ~ that candidate is Jill Stein and she’ll get my vote on November 2nd because I deserve a true choice and will not settle for the lesser of two evils.

A vote for the Green Party is not a protest gesture ~ it is a vote for a platform of peace, social justice and a livable planet, and against the War Party of Lies. Bernie sold out on the progressive movement he launched because he didn’t trust the power of the people nor, for that matter, his own progressive voice against the establishment.

In essence, Donald Trump is the ultimate false flag candidate put in place by the establishment to further dumb down the political process, avoid the truly important issues of the day, entertain the masses as a grade D political reality show ~ and thus ensure a Clinton victory as the obvious lesser of two evils.