If you don’t think that NWO agents have already gone to the nuthouse and started acting like wild animals, then perhaps Flaming Jewish Neocon Max Boot will change your mind.

Boot wants any entity to overthrow the Assad government and was thrilled to realize that Saudi Arabia, Qatar, Turkey and Jordan were more than happy to provide military and financial support to the so-called Syrian rebels,[1] despite the fact that flaming Neocon Elliott Abrams himself conceded that the same terrorist group was responsible for terrorist acts.[2]

The New York Times itself admitted that the rebels had “an explicit stamp of approval from Al Qaeda,” and the group itself “is a direct offshoot of Al Qaeda in Iraq, Iraqi officials and former Iraqi insurgents say, which has contributed veteran fighters and weapons.”[3] Israeli officials agree that Assad is more dangerous than many terrorist organizations, and it is their duty, they say, to obliterate any threat.[4]

But the simple fact is that Assad is still on the throne, and the man who is largely responsible for this resides in Russia. His name is Vladimir Putin. Neocons like Boot understand that had it not been for Putin, Assad would have been placed in a dumpster somewhere in the Middle East. He probably would have been dragged through the streets of Damascus.

Boot is obviously mad and sad and wants to be bad because the situation isn’t going the way as planned. How does he respond to the situation in Syria? Well, you know the Neocon drill: Vladimir Putin is a war criminal.

“It’s unlikely to happen,” Boot has recently lamented, “but if there is any justice in this world, Vladimir Putin will someday have to answer for his crimes.”[5] Boot was just getting started:

“He has committed a litany, to be sure. He even stands accused of orchestrating the bombings of Russian apartment buildings in 1999 which allowed him to consolidate power and launch a brutal war of occupation in Chechnya. In more recent news, he is responsible for crimes against humanity in Ukraine and Syria.”[6]

If you think that Boot has any common, then hang in there. Boot moved on to cite Paul McCleary of Foreign Policy saying that Russia—pay close attention here—ignored “a ceasefire negotiated by its foreign minister and Secretary of State John Kerry” and launched a full-fledged attack on the so-called Syrian rebels![7] 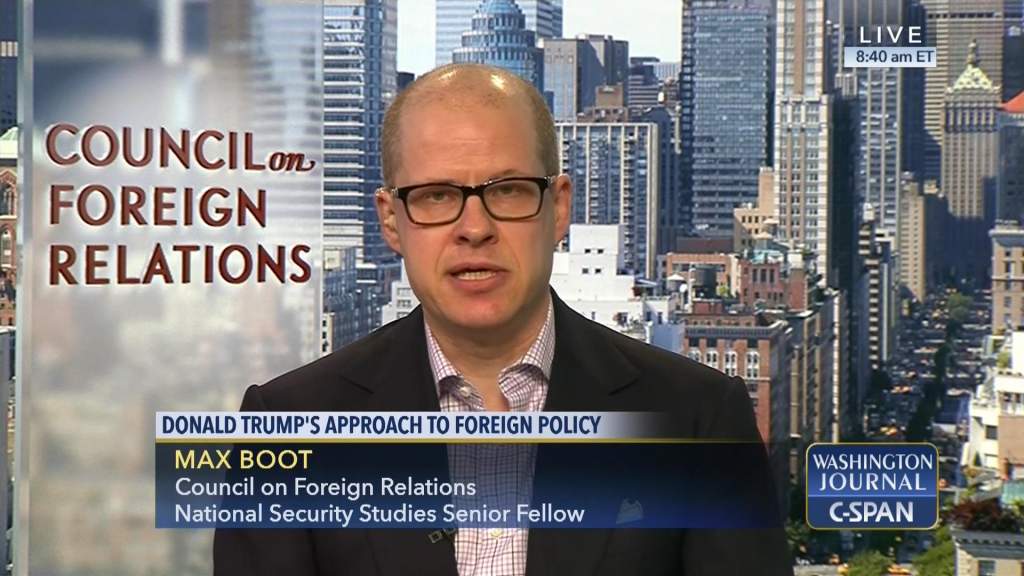 I honestly had to double check the author of those assertions because I really didn’t believe that Boot would say something so dumb or crazy. This man simply ignores the fact that it was the US, not Russia, that actually broke the ceasefire. He ignores the fact that Russia wanted to resolve the issue diplomatically but got nowhere with people like Samantha Power. Boot has to take that stupid route because his essentially diabolical weltanschauung does not allow him to think and reason. He adds:

“A war crime indictment from The Hague would be fully warranted but is unlikely because Putin is seen as too powerful to prosecute. At the very least, however, Putin needs to be shunned and sanctioned like he has never been before. Putin presides over a gangster-state that is one of the worst perpetrators of human-rights abuses on the planet, and he should be treated accordingly.

“If the Obama administration refuses to do more to make Putin pay a price for his crimes–if it insists, as it has been doing, on legitimizing Russia’s intervention in Syria, rather than providing rebels with the means to defend themselves–it is, in effect, becoming complicit in his war crimes.”[8]

Let’s suppose for a moment that Boot is right, that Putin is guilty as charged. Should Putin be the first person to be dragged in The Hague? Does Boot really want to tell us that the war in Syria is worse than the war in Iraq, which led to sodomy in places like Abu Ghraib and which eventually led to debacles in Guantanamo? Doesn’t he know that the war in Iraq alone will cost American taxpayers at least six trillion dollars?[9]

Unlike flaming Neocon whores and sluts like Ann Coulter and Sarah Palin, Boot admitted in 2013 that the war in Iraq was a total disaster. But Boot blamed that disaster on “faulty intelligence,”[10] not on the Jewish Neocons who actually advanced really stupid arguments for the war in the first place for Israel.[11] He wrote in the LA Times then:

“It is entirely fitting that the invasion of Iraq began, 10 years ago Tuesday, based on faulty intelligence: Our actions throughout the war were marred by miscalculation and wishful thinking time and again.

“Wrong” is not the right word here. The Neocons absolutely knew what they were doing. They knew that Saddam had no WMDs,[13] but they had to use categorical lies and colossal hoaxes to persuade the masses because they wanted America to get into a bloody and unnecessary conflict with Saddam. Thomas Friedman of the New York Times told the Israeli newspaper Haaretz in 2003 that the plan for war in Iraq

“was disseminated by a small group of 25 or 30 neoconservatives, almost all of them Jewish, almost all of them intellectuals (a partial list: Richard Perle, Paul Wolfowitz, Douglas Feith, William Kristol, Elliott Abrams, Charles Krauthammer), people who are mutual friends and cultivate one another and are convinced that political ideas are a major driving force of history. They believe that the right political idea entails a fusion of morality and force, human rights and grit. The philosophical underpinnings of the Washington neoconservatives are the writings of Machiavelli, Hobbes and Edmund Burke.”[14]

So, if Putin’s head has to be placed on a silver platter, what about the Neocons who instigated the war in Iraq in the first place? What about Max Boot, who is picking up where his brethren left off? Shouldn’t those people be put to trial and be punished accordingly? Will Boot turn himself in?