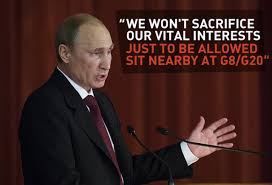 Jim W. Dean has recently said that people in “the military industrial complex” are really angry because they cannot get their “war with Iran and are looking for a substitute.” They think they have found their substitutes: Russia and Syria.

The people in the military industrial complex have desperately been trying for months to get the United States involved into an unnecessary conflict with Russia, and they are now using all kinds of dumb excuses as to why they have the “moral” obligation to incite real violence against Russian cities.

Remember what John Kirby has recently said? “Extremist groups [terrorists],” he posited without hesitation, should consider attacking “Russian cities.”[1] But Kirby is far from alone here. For example, take a recent diatribe which has been published by the editorial board of the New York Times.

The editorial board begins to lay out the inexorable truth by blaming Russia for virtually any bad thing that happens in Syria and Ukraine. The people who write the column will never learn at all, despite the fact that serious academics such as John J. Mearsheimer of the University of Chicago and Stephen Cohen of Princeton have written extensively that the West is largely responsible for what has been going on in Syria and Ukraine.[2]

Other scholars such as Vladimir Golstein of Brown University and Vladislav Krasnov, whom we have interviewed in the past, have said basically the same thing.

People at the New York Times have not been listening to the other side and have not taken time to responsibly provide serious answers to arguments and counter-arguments at all. Why?

What’s amazing about these discussions is that NWO agents cannot (or are not willing to) follow a simple or basic argument at all. And when logic inexorably disproves their weltanschauung, then they basically shout and scream saying things like “to hell with logic and reason. We have an obligation to violate the rules without any justification.”

Keep in mind again what Philip Gordon (a senior fellow at the Council on Foreign Relations and a former special assistant to President Obama and White House coordinator for the Middle East) said:

“When it comes to Russia’s recent actions in Syria, I believe the rule needs to be broken.”[3]

The fact is that NWO agents like Gordon have been doing exactly that for years, and the editorial board of the New York Times is no exception. Once again, they completely ignore the fact that the United States itself has been supporting ISIS in Syria. What they are really concerned about is that Russia has no right whatsoever to ally with the Assad government and to start annihilating ISIS and other terrorist groups.

The editorial board declares that Vladimir Putin’s “behavior in Ukraine and Syria violates not only the rules intended to promote peace instead of conflict, but also common human decency.”[4]

The board will never address the fact that the United States has to take some responsibility for the situation in both Ukraine and Syria. The board will never tell its viewers that people like flaming Jewish Neocon Victoria Nuland allied with neo-Nazis in Ukraine in order to destabilize the government. Why doesn’t the New York Times point this out?

Well, that would ruin their political calculus.

In addition, the editorial board will never warn its viewers that flaming Jewish Neocon Daniel Pipes postulated back in 2013 that the United States needed to support both the Assad government and the Syrian rebels/terrorists so that they could end up killing each other, an essentially diabolical plan which can only work in the minds of people like Pipes. The editorial board has to say one nonsense after another because that is how the New World Order has thrived over the years. The editorial board continues to say:

“Russian and Syrian warplanes knocked out two hospitals in the rebel-held sector of Aleppo as part of an assault that threatens the lives of 250,000 more people in a war that has already claimed some 500,000 Syrian lives….

“Mr. Putin fancies himself a man on a mission to restore Russia to greatness. Russia could indeed be a great force for good. Yet his unconscionable behavior — butchering civilians in Syria and Ukraine, annexing Crimea, computer-hacking American government agencies, crushing dissent at home — suggests that the furthest thing from his mind is becoming a constructive partner in the search for peace.”[5]

Where should we start? There is enough mumbo jumbo here to write an entire book. But readers who are interested in studying this issue a little further should refer to Stephen Cohen’s studies, which are outlined in books such as Soviet Fates and Lost Alternatives: From Stalinism to the New Cold War and Should the West Engage Putin’s Russia?: The Munk Debates.

Readers should also check out a recent article by former White House National Security Council advisor Gwenyth Todd, whom we have interviewed in the past. Todd has argued quite rightly:

“There is no viable solution other than to tell all [Syrian] armed rebels to lay down their arms or face all [US] support being cut off…We [the United States] could fix this tomorrow by letting Assad reestablish control and security, but instead we keep insisting on legitimizing the rebels.”

New World Order agents are so deluded by their own lies and fabrications that they cannot see anything else. They want to tell us all that one of Putin’s global strategies is to “defeat the West”![6]

Putin has been discussing the central issues since 2011, but now Zionist outlets like Newsweek want to propagate the categorical lie that Putin wants to break down Western Civilization.

Not only that, Putin “is restoring the fallen Soviet Union,”[7] despite the fact he has made it very clear that people in the movement were driven by “false ideological considerations”[8] and despite the fact that “Putin’s guru” is none other than Alexander Solzhenitsyn,[9] the man who attacked the Soviet Union for its crime against humanity in books such as The Gulag Archipelago and Two Hundred Years Together.

It is sad and pathetic that New World Order agents cannot stop positing one dumb statement after another. They want to maintain contradictory statements at the same time and in the same respect.

Perhaps NWO agents need to start paying attention to what what the 11th-century Persian polymath Avicenna said about people who want to break the law of non-contradiction: