There are three proponents in this marriage of genocide and there always has been. The same template of Caiaphas the high priest, the Arab Herodian Kings and the Roman Legion are equally as relevant today as they were 2,000 years ago.

In the 21st century, they are the Jewish Bankers on Wall street, in the city of London, Vatican city and the Zionist state. The Saudi Wahhabi Islamic extremists funded and supported by the Saudi Arabian monarchy, Qatar and Turkey. And the US CIA mercenary military, Knights of Malta who answer to the pope.

The objective of the first is to eradicate Torah Jews who adhere to the Old Testament.

They do not support the usury money system and read the Jerusalem (Palestinian ) Talmud, as opposed to the Babylonian one. The Torah Jews who do not believe in either the Temple (an idol) or the Zionist state (an idol), as this is breaking the Covenant made between the real Israel and the Hebrews on Mount Gerizim when Joshua dedicated them to the law. They are of the opinion that Judaism is a belief system not a nationality.

Along with these objectives they plan to create Greater Israel under the Yinon Plan, which will extend from the Nile as far down as Luxor, the Sinai and across into Lebanon and Syria ending at the Euphrates River.

It has not been surprising then, that the Zionists have and are supporting Islamic terrorists on the Golan heights, nor is their collusion with Turkey surprising, or buying stolen oil from Syria and Iraq that was transported by Daesh across the border to Turkish ports and then exported to Israel. 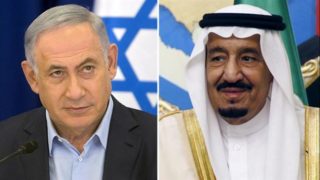 The objective of the second is to create a Muslim Brotherhood Wahhabi extremist Islamic state under Sharia law.

This caliphate will extend across the whole of north Africa, through Saudi Arabia, Iraq, Iran, Pakistan and Turkey into Georgia, the Caucasus of southwest Russia, and include all the “Stans” of Eurasia. And along with this, the eradication of Shiite Islam and the Shiite crescent, which extends from Iran, through parts of Iraq and parts of Syria.

Only in the last week, John Kirby from the US State Department said:

The Saudi Royal family was founded by a Khazar, Babylonian Talmud Jew from Turkey who married a Muslim woman, in the same way that the Arab Herod Kings married into the Jewish Levite priesthood.

The destruction of Russia and the Orthodox Christian Church is an agenda that has been on the cards from all three demons:

Khazar Bablyonian Talmud Jews who were also the Jewish Bolsheviks who, according to Aleksandr Solzhenitsyn in “Together For Two Hundred Years”, killed almost 100 million Orthodox Christians through their slave camps and gulags.

The Vatican, whose agenda has for 1,000 years been to bring the Orthodox Christian Church under the control of Rome and the Pope.

And Islamic extremists, who were behind the Armenian Genocide in Turkey just over 100 years ago and the persecution of Orthodox Christians in Syria, Egypt and Libya.

The third is to wipe out Orthodox and Protestant Christianity in accordance with the Jesuit oath and the inquisition, which still control this church today.

Any Christian group that does not give allegiance to the Pope as Christ’s representative on earth has been and will be infiltrated and converted to Christian/Zionism. A Holy Roman Catholic Empire where all land, bodies and souls are owned by the pope.

This empire will extend through south and north America, across the whole of Europe through the EU where “the crowds do not decide their fate” according to Martin Shulz, and to annex the whole of Russia — something that failed under Napoleon and Hitler and was almost achieved in the 1990s with the fall of the Soviet Union.

So far they have failed in Syria and Iran, with failures in Iraq and Yemen soon to follow, while Russia has instead returned steadfastly back to the Orthodox Christian Church under the guidance of President Putin.

Greece, another Orthodox Christian country has been successfully destroyed over the last 1,000 years, and has been attacked on two fronts.

By the Roman Catholic sacking of Constantinople in 1204 from which they barely recovered, followed by most of Greece being invaded by the Turks 500 years ago, and turned into an Islamic state along with the 1,500 year Haggia Sophia in Constantinople converted into a museum.

Since then, the rest of Greece has been subjected to covert and overt infiltration and destruction of their economy and their country, in the 20th century, with the Nazi invasion followed by CIA-engineered fascist coups, and in the 21st century most recently by the European Union and Goldman Sachs.

But the nightmare continues, moving to north Africa

In 2011, Libya – a stable country with free health-care, education, a roof over everyone’s head and government subsidies for farming and farming equipment, amongst many other social benefits funded by their oil revenues – was subjected to a “color revolution-regime change” and invaded by the Muslim Brotherhood and Wahhabi extremists. It was later bombed by NATO, leaving it a failed state.

During the Arab spring in Egypt, the Muslim Brotherhood failed to take control over that country when the Egyptian people and the military ousted them and replaced that organisation that had been banned for many years under Mubarak, with General Sisi.

The massacre at Queen Hatshepsut’s Temple has not been forgotten. This massacre by Islamic extremists in 1997 was by 2011 under Morsi being continued, and Christians were being persecuted and their churches burnt down. The result was that Egypt suffered a serious decline in their tourist industry, which had formed a major part of their economy, and also suffered persecution of their own people.

It is not only Egypt and all her temples – the Cairo Museum, the Pyramids and the whole Orthodox Christian Coptic church – that Daesh intends to destroy, but to use these terrorists for further incursions into Africa — especially oil-rich Nigeria, as well as Sudan, and to finally destroy the Orthodox Christian Church in Ethiopia, for which the Vatican will be as grateful as it has been with the results of Islamic terrorism in Georgia and Russia. The same destruction of the oldest Orthodox Armenian Christian communities in Syria will be repeated in Nigeria, Egypt and Ethiopia. The nightmare is spreading.

All three of these demons have failed to get rid of Assad.

They have failed to break up Syria, handing it over to the Islamic state in the southern and far eastern regions, while the northern regions up to the Euphrates are earmarked for Israel, along with the oil-rich Golan heights, which they have failed to return to Syria in accordance with UN Resolution 242.

The US is transporting their remaining Islamic State and al-Qaeda terrorists fleeing the region back to Libya.

On 9/11/2012 a revenge killing took place in Benghazi, when Senator Stevens was killed. It is my opinion, for what it is worth, that the reason Hillary Clinton ordered US supporting forces to stand down when the embassy was surrounded was because initially she thought that those who had arrived at the embassy were the Jihadis with whom she was cutting deals to transport arms, ammunition and “rebels” to Turkey in order to attack Assad.

Whoever they were, these were not the ordinary Islamic extremists that she was used to dealing with. Instead, Stevens was murdered in a similar manner to the way Gaddafi had been murdered by her henchmen only a year before, but this time on that auspicious date of 9/11, which has now come to have wide and vast implications worldwide. The footage of this murder was not only sent to her, but spread across the Internet. The message was clear and unequivocal, whether anyone else other than myself wants to see it for that. “They came, they saw, Stevens died.”

The Russian Institute for Strategic Studies (RISS) has warned that, by the end of the year, nearly all of the terrorists fleeing from both Syria and Iraq will be moved to north Africa.

No doubt these terrorists will back Boko Haram, which intends to wipe out Christianity in Nigeria. If you have not seen this interview then please do so. Veterans Today Africa interviewed by Press TV recently outlines the same game plan in Nigeria that has been played out in Syria.

I also recommend that you read the section on Boko Haram in Gordon Duff’s article from 2012, where we again see collusion between Islamic extremists, the Mormon Church, which is a covert Vatican sect, and the Zionists: Romney Leaks: Drugs, Blood Diamonds and a Cuban Mistress (Updated)

The plan is also to send their fleeing Islamic terrorists to Libya so that they can begin the destabilization of Egypt again after the US / Muslim Brotherhood-supported coup failed to destroy that country as they have done in Libya and have almost succeeded in Syria. 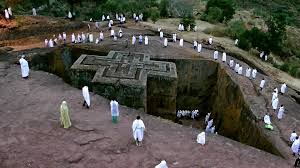 Furthermore the long-term objective is to start a war with Ethiopia under any pretext, be that water disputes over the building of dams in Ethiopia, or any other reason that will suit their purpose in order to destroy the Orthodox Christian churches and turn Ethiopia into yet another Islamic state controlled by the Muslim Brotherhood and the extremist Wahhabi sect.

And so, the tripartite of Caiaphas, Herod and Pontius Pilate intend to rule the whole world with their warped brands of Judaism, Christianity and Islam.