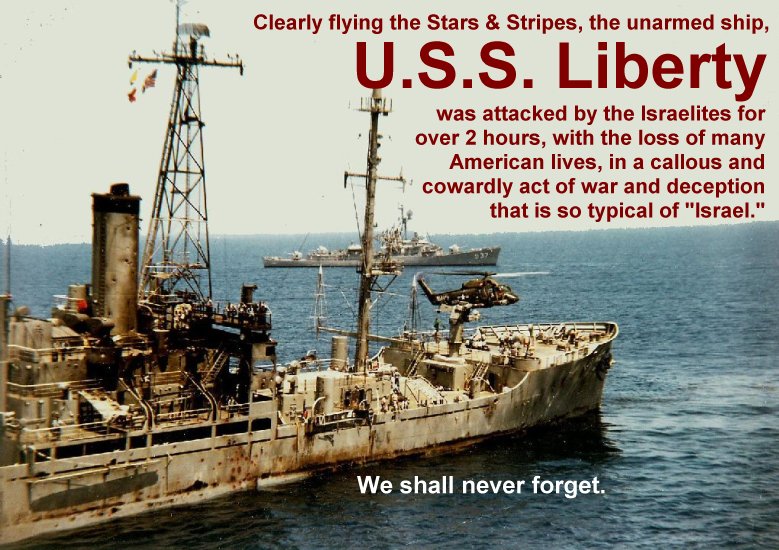 As 50th anniversary approaches, all eyes are on film project 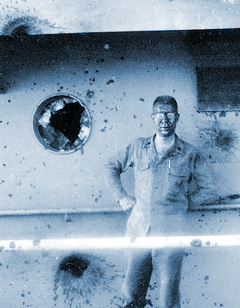 [ Editor’s Note: I learned about the Liberty as most of the rest of you did, probably through the internet, as the crew was on the ball to pick up on using it before many others. I remember how impressed I was to find a group smart enough to compile all of their key material in one spot to have one focal point for their story that people would know they could go to for updated information.

I was struggling with other orgs trying to explain to them that a website could be for than an online fancy business card, but that you have to put a lot into it if you wanted to get a lot out. They generally did not like that part of it.

But that was our strategy with VT, to break out of the flooded online newspaper and blog format where everything was just copied and pasted, because I suspected the audience was going to be burned out on that format.

I know of no team of veterans who have hung together like the Liberty crew has, despite the continued screwing they have gotten from their government, and the US Navy who last time I called was still stone walling all new inquiries with their pat answer, “We have no new information to share with you about the Liberty incident”.

Phil Tourney is no stranger to using internet tools to fight a long term uphill battle, including his own radio show. I did an hour show with Phil a couple of years ago while sitting in for Mike and heard for the first time his personal story, about how his damage control party was darting out onto the deck between the Israeli attacks to pick up what was left of the dead and wounded.

We welcome you all to join us tonight. We will be live here at 6pm EST, and will try to open up the second hour for listener calls at: 310-421-4053. Phil will be discussing his new book on the USS Liberty incident that he has done to fund doing a new film version of the story … JD ]

It’s hard to believe that nearly 50 years has passed since Israel attacked my good ship USS Liberty in international waters.

I have personally spent the last 30 years getting the truth out; writing thousands of letters to politicians, attending events across the country, having the great honor of being the only three-time president of the USS Liberty Veterans Association.

I have been hosting a radio show, writing articles and books, and whatever else I could do to teach anyone I could about the vicious attack, that is still covered up today by not just the Zionist state of Israel, but the U.S. government as well.

My first book, What I Saw That Day: Israel’s June 8, 1967 Holocaust of U.S. Servicemen Aboard the USS Liberty and its Aftermath, helped to educate thousands about Israel’s pre-meditated, cold-blooded attack and cover-up that slaughtered 34 of my shipmates and wounded 174 others, including myself.

Now, as the 50th anniversary of that horrific attack approaches, I have a new book that has just been released, which is sure to be just as popular as my first, and maybe more so. Perhaps most importantly, this new book, Erasing the Liberty: My Battle To Keep Alive The Memory Of Israel’s Attack On The USS Liberty, is the primary funding vehicle for a full-length feature film of the same name.

Containing not just my memoirs of that day and the decades that followed, Erasing the Liberty has eyewitness accounts of 12 of my shipmates, all Liberty survivors and crew members, as well as firsthand testimony of six sailors who served aboard ships who came to the Liberty’s rescue, plus testimony from other military men. 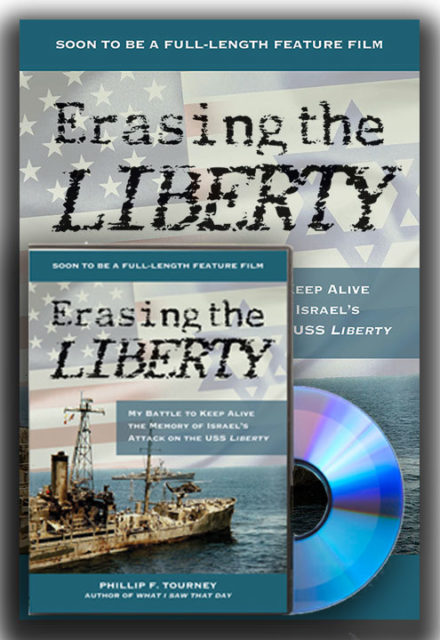 The book ties in thousands of facts and first-hand accounts to present one undeniable conclusion: the attack on the Liberty was anything but a mistake, and our own government betrayed, and continues to betray, all Americans with its disgraceful cover-up.

Erasing the Liberty is packed with all available information on Israel’s vicious attack on my unarmed spy ship and the U.S. government’s continuing cover-up, gleaned from every book about the assault, as well as from other sources.

As self-important as it may sound, the attack on my ship and its aftermath had and continues to have a lasting impact on nearly all of our lives—every inhabitant of planet Earth—from June 8, 1967 to the current day. In fact, the attack on the Liberty—perhaps more than any other post-WW II event—set the stage for how our world has unfolded.

The ways this is manifested are many, but the consequences of allowing Israel to fulfill and maintain its illegal land grab, and to suffer no punishment for its slaughter of innocent Americans on the high seas in international waters, has certainly not moved the world on a peaceful path.

We all know that if those in charge of the mainstream media—whether the print media, the big book publishing houses, the television networks, or the major movie studios—wanted you to know about the Liberty, you would already know.

They don’t want this story told: not today, not tomorrow, and not ever. But I do. And I hope you do, too.

I encourage all Americans, and anyone else interested in the truth and peace, to visit http://usslibertymovie.com and make a donation today. For any amount over $25, we’ll mail out my new book, Erasing the Liberty, right away. God bless you for your support, and God bless the United States of America.