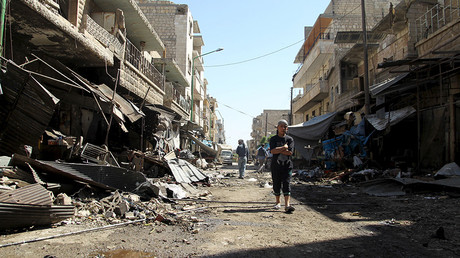 Top Washington officials are set to discuss striking positions of the Syrian military without a UN Security Council resolution. Bombing air force runways with missiles fired from coalition planes and ships is being considered, according to a report.

“One proposed way to get around the White House’s objection to striking the Assad regime without a UN Security Council resolution would be to carry out the strikes covertly and without public acknowledgment,” one administration official who is to take part in the discussions told the Washington Post.

A meeting of the Obama administration’s Principals Committee is scheduled for Wednesday, the newspaper reported, adding that a meeting of the National Security Council could follow this weekend.

The CIA and the Joint Chiefs of Staff expressed support for “limited military strikes against the Syrian government,” last Wednesday, when the US discussed such “kinetic” options, the official told the Washington Post.

“There’s an increased mood in support of kinetic actions against the regime,” one senior administration official was quoted as saying.

“The CIA and the Joint Staff have said that the fall of Aleppo would undermine America’s counterterrorism goals in Syria,” he added.

After threatening to withdraw from the Syrian peace process for weeks, Washington finally announced the “suspension” of bilateral contact with Moscow concerning the crisis on Monday.

Although contact to “deconflict” encounters between the aircraft of the US and Russian militaries in Syrian skies will continue, the US is withdrawing personnel dispatched for the purpose of setting up a Joint Implementation Center (JIC) for the ceasefire.

The JIC, which would have been located in Geneva, was to coordinate military cooperation and intelligence-sharing between Russia and the US-led coalition fighting Islamic State (IS, formerly ISIS/ISIL) in Iraq and Syria.

There is “nothing more for the US and Russia to talk about” in Syria, White House spokesman Josh Earnest concluded on Monday.

Russia’s Foreign Ministry said it was “disappointed” by the decision, while accusing the US of trying to shift the blame for its own failure in Syria. Russia has made efforts to preserve the September 9 ceasefire agreement, repeatedly urging Washington to live up to its obligations, the Foreign Ministry in Moscow said on Monday.

“It turns out that Washington has failed to fulfill the key condition of the agreement to ease humanitarian situation for the residents of Aleppo” said Foreign Ministry spokeswoman Maria Zakharova. “And now, apparently, having failed to honor these agreements that they themselves worked out, [the US] is trying to shift the blame.”

On Monday, Russian President Vladimir Putin suspended Moscow’s participation in a program that disposes of plutonium from decommissioned nuclear warheads, citing “a radical change in the environment, a threat to strategic stability posed by the hostile actions of the US against Russia, and the inability of the US to deliver on the obligation to dispose of excessive weapons plutonium under international treaties.”

Asked if the US had fulfilled its own long-standing obligation to separate the so-called moderate opposition from terrorists, State Department spokeswoman Elizabeth Trudeau replied, “We believe we did.”

When RT’s Gayane Chichakyan reminded Trudeau that several major rebel groups had refused to abide by the ceasefire outright, the spokeswoman hit back: “We expected good faith efforts, not only from rebel groups on the ground… but also Russia. “If attacked, opposition groups have the right to defend themselves,” she added.