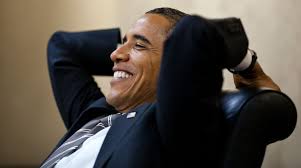 President Obama just hit the highest approval rating of his second term in a new poll.

On Thursday, a CNN/ORC survey found that 55% of Americans approve of the job Obama is doing, the highest mark in the poll since the president was sworn in for a second time in January 2013.

Obama hit 55% just twice in the CNN survey after his first year in office, including once right before his second term began. His approval ratings were much higher in the opening months of 2009, but he was also riding a post-election high.

The president is hoping to use his approval rating to help get Hillary Clinton elected next month.

“Let me just say that I think the president views himself as a clean-up hitter,” said White House press secretary Josh Earnest during a briefing with reporters Wednesday, as he discussed the president’s role in the campaign. “He’s got the biggest bat in the line-up. He’s the guy with the high approval rating. He’s the guy with the enormous influence among young people and African Americans and Hispanics and women who are likely to play an important role in determining the outcome of this race.”