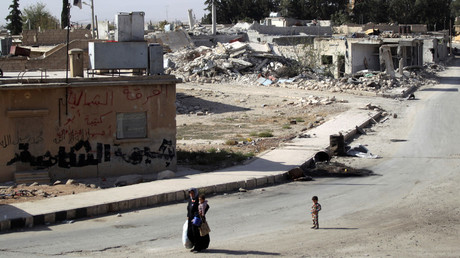 Russia is ready to urge the Syrian government to let Al-Nusra Front militants exit Aleppo with their weapons, as proposed by the UN envoy to Syria, Foreign Minister Sergey Lavrov says.
–
Once the jihadists exit the war-ravaged city, Syrian government troops and the opposition will be able to form joint law-and-order bodies, Russia’s top diplomat said, as cited by RIA Novosti.
–

Russian FM urges ‘care’ of all Aleppo residents, not just those in east of city
–

“In the first place, those who don’t leave with ‘Nusra’ should clearly separate themselves [from it], on paper, officially sign such a commitment,” Lavrov said.

“Maybe then the government law enforcers and this armed opposition will be able to form some kind of joint law-and-order bodies to ensure normal life, so that people would feel safe,” he continued.

On Thursday, the UN’s envoy for Syria, Staffan de Mistura, warned that East Aleppo might be destroyed within two months if the military action in the city continues. He also urged Al-Nusra to leave the city, saying that he is willing to personally escort them out.

“If you [Al-Nusra] did decide to leave, in dignity with your weapons, to Idlib or anywhere you wanted to go, I personally am ready, physically ready, to accompany you,” he said.

Lavrov noted that according to the UN estimations there are between six and eight thousand militants in Aleppo.

“Among them up to half, that what Mistura said in the UN Security Council [are from] ‘Jabhat Al-Nusra,” the Russian Foreign Minister said.

If Al-Nusra exits Aleppo and moves to Idlib, where its major forces are located, Russia “will be ready to call on the Syrian Government to agree with that,” Lavrov added.

On Friday, German Chancellor Angela Merkel called on Russia to end what she described as “atrocious” violence in Aleppo, citing Moscow’s influence on the Syrian government. Similar calls have been made by the government spokesperson, Steffen Seibert.

“We believe that Russia and Iran in particular are obligated to use their influence on the Assad regime to halt the escalation in violence and the suffering of the civilian population,” Seibert said.

Syrian jets, backed by Russian Airforce, are targeting militants in East Aleppo after jihadists there repeatedly violated the cessation of hostilities, according to Moscow and Damascus.

On Thursday, Lavrov said that Russia wants to resolve the Aleppo deadlock via “all means available.” He also stressed that in terms of humanitarian aid deliveries Moscow “does not divide Aleppo into parts, controlled by government and militants.”

During an interview with Denmark’s TV 2 channel, Syrian President Bashar Assad said he wants to completely liberate Aleppo from militants, however in doing so “deals” and “amnesties” should play a key part.

He nevertheless stressed that the assumption that there is “moderate” opposition does not reflect the truth. Instead the Syrian leader called such forces “a myth.”