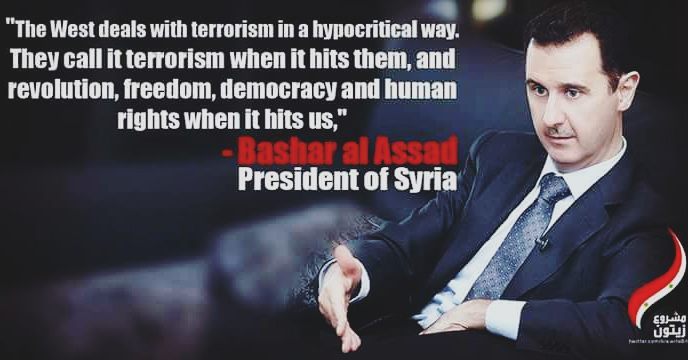 If you think that Bashar al-Assad is just crazy and does not understand basic logic, if you think that he is a mad man who will not listen to reason and wants only destruction in Syria, then you’ll be surprised to see how he politically and intellectually vaporizes the New World Order propaganda in the Western media.

You don’t have to agree with everything the man has ever done or said, but if you can understand that his position in Syria is more rational than the New World Order ideology, then you have to draw the conclusion that Assad has every right to defend his country.

Moreover, if you are a man of reason and have zero tolerance for irrationality, deliberate deception, complete hoaxes, and categorical lies, then you have an obligation or duty to watch the following interview very carefully.

Once you are done, then you have to weigh the evidence against the alternative, examine Assad’s statements, and compare them to what the Khazarian Mafia and their lackeys have been perpetuating in the media. This will almost certainly change your perspective on the war in Syria:

A transcript of the interview is also provided here, so you can go back and reexamine any essential point that needs further clarification. Let practical reason be your guide throughout your investigation, and never let the media and NWO agents do the thinking for you.

If you can come to the point that logic in the moral and political firmament is better at leading you to the truth, then you will inevitably agree with Gordon Duff when he told Press TV News a few days ago that there is an inextricable link between the United States and terrorist cells in Syria.