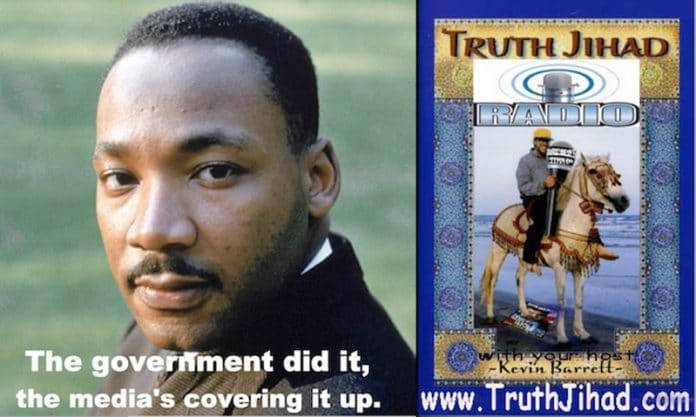 $3.95 a month you can listen to shows on-demand before they are broadcast – and also get free downloads and other perks from Kevin! If you are a subscriber, just log in to the members area of TruthJihad.com to get early access to the shows. Non-subscribers only get access to the No Lies Radio show archives the day after the broadcast here. Help Kevin keep these shows on the air – become a subscriber today! Or if you prefer, PAYPAL a one time donation, or a regular payment, to truthjihad(at)gmail[dot]com.

Dr. William Pepper won a 1999 jury trial proving US government agencies, including the FBI, CIA and US Army, murdered Dr. Martin Luther King, Jr.  (Dr. King’s family and the King Center have been shouting this from the rooftops for 17 years now, but the media refuses to report this simple fact.) Now his brand-new book The Plot to Kill King: The Truth Behind the Assassination of Martin Luther King, Jr. summarizes his findings—and adds shocking new details, including the name of Memphis Police Department sharpshooter who shot King (he is still alive, and Pepper talked to him quite recently) and the names of those who finished the job of killing Dr. King in the hospital after the shooting.

William Pepper’s The Plot to Kill King is a monumentally important book. The fruit of decades of painstaking research, featuring full-length affidavits from witnesses and perpetrators, it not only solves the King murder case once and for all, but also reveals more about the way the Deep State operates than any other book you are ever likely to read.

At the end of this interview, William Pepper – whose current work focuses on freeing the innocent patsy of the Robert Kennedy assassination, Sirhan Sirhan – discusses his relationship with the Rockefeller family, and how he almost got a chance to go face-to-face with David Rockefeller about Rockefeller’s apparent complicity in the JFK assassination.

Martin Luther King, Jr. was killed because he was about to lead 500,000 people to Washington, DC and start a revolution. That revolution is long overdue – as every American who learns the truth about “deep events” like the 1960s assassinations, 9/11 and false flag terrorism, election fraud,  and other suppressed issues will surely agree.