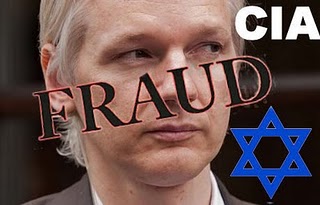 There is a strange story here, not just Wikileaks and Trump but a strange tangle of history that goes back to the McCarthy era and the homosexual scandal around the muckraking senator and his chief counsel, Roy Cohn.

Cohn was a mentor to Trump and Bush and a close confidant of Rupert Murdoch, who was mentor to Julian Assange.  We are going to limit the dots connected, too much of that leads to nice stories but little else.  However, there is real fire behind this smoke, as this journey will prove.  Be sure to peruse the addendums.

For those of you who don’t remember, Wikileaks supposedly is secretly funded by a Swedish billionaire who had an underground fortress built to house Wikileaks servers.  Power was supplied by diesel engines intended to power Nazi U Boats.

Story sound familiar?  This is where the tale began, told by Donald Rumsfeld, the man who invented not just this, but much more as well, like two wars he pulled out of his behind:

So, let’s talk a bit about Wikileaks.  Do you know who they are?  Well, according to their website, these are their financial partners:

You will see a “who’s who” of controlled corporate and, surprise surprise, Zionist media.  Murdoch’s Wall Street Journal is there as is MI5’s “Guardian.”

For those of you who are unaware, Wikileaks has views.

Taking this into account, how might one find such an organization to be other than an analog of the Mossad, MI6 and CIA?

Let’s look at efforts to persecute Wikileaks for it’s efforts to promote whatever the hell it promotes, which from my viewpoint seems to be Israeli exceptionalism.

Well, Julian Assange, who is quite probably not very heterosexual, is hiding out from obscurely worded “date rape” charges brought against him by two young Swedish women.

Call me suspicious but when I look at Assange or even Donald Trump, perhaps throw George W. Bush into the group as well, I tend to believe I am looking at homosexual males who use publicists to make them seem to be virile and powerful through imaginary sexual exploits. Remember the Larry Flynt story about Bush and his secret abortions?  Our sources tell us that this story was fed to Flynt to cover for the Bush gay affair with phony White House correspondent Jeff Gannon.  Gannon’s 12 “sleep overs” in the Bush White House and 32 “nooner” visits (Source:  United States Secret Service logs) are only a series of bizarre and improbable coincidences.

With Trump, I can only reflect on my own experiences.  I was a Marine in training at Camp Pendleton, prior to being deployed to South Vietnam in 1969.  The “locker room” tales told by recruits who had just spent the weekend in Tijuana at whore houses was far less sleazy than Trump’s typical banter.  Guys, heterosexual guys at least, don’t really talk like that.  I’ve never heard it, none of us at VT have.

Nobody has because men just don’t talk like this, it is not only tasteless, it is stupid.  If I were a billionaire who despises women but has an addiction to dirty sex, as Trump is actually trying to tell us, sophomoric crotch grabbing is not going to make sense.  It would be like offering Dracula a cherry coke.

As for Assange, totally gay, end of story.

Let’s now get to that other part, about law.  Assange is locked up for imaginary rape, something I believe was set up by an intelligence agency in order to keep him in the spotlight, with major help from the controlled media, for year after year.

But what about the millions of stolen documents?  Assange didn’t do it?  Who did?  Why is there never an attempt to find out who Wikileaks really is and who hacked Army intelligence or the State Department classified cables, things like that?

Nobody ever asks.  No discussion of an investigation is brought up anywhere.  The CIA isn’t looking for Wikileaks, there are no grand juries yet, were any other “group” to steal classified documents and leak them endangering America’s national security, they would be “droned and renditioned” to death.

In fact, Assange has never been charged with anything.  From a Reuters story in 2014:

Despite claims by Julian Assange that Washington is plotting to extradite and execute him, U.S. and European government sources say the United States has issued no criminal charges against the WikiLeaks founder and has launched no attempt to extradite him.

There is no active investigation, there are no suspects, no hackers, no servers, no leakers.  Wikileaks material appears out of nowhere, passed on by no-one and there are no laws being violated by any living human being even though the material is often highly classified or fabricated to seem as such, generally a mixture of both.

So, who hates Iran and loves Netanyahu?  Why do they love the Donald?

Why does nobody ask?

David Schine was born on 11th September, 1927. His father was the owner of the Schine Hotel Corporation. Educated at Harvard University he produced a six pamphlet on the dangers of Communism that was distributed free to those staying at his father’s hotels. In the Definition of Communism, Schine argued that the Communist Party was guilty of “stealing words, such as freedom, security, and equality from the Bible, and other good covenants to confuse issues, and deceive the mind into ensnarement.”

Schine was very friendly with the anti-communist lawyer, Roy Cohn. In 1951Joseph McCarthy appointed Cohn as the chief counsel to the Government Committee on Operations of the Senate. Soon afterwards, Cohn recruited Schine to become his chief consultant.

For some time opponents of Joseph McCarthy had been accumulating evidence concerning his homosexual relationships. Rumours began to circulate that Schine and Roy Cohn were having a sexual relationship. Although well-known by political journalists, it did not become public until Hank Greenspun published an article in the Las Vagas Sun in 25th October, 1952.

Joseph McCarthy considered a libel suit against Greenspun but decided against it when he was told by his lawyers that if the case went ahead he would have to take the witness stand and answer questions about his sexuality. In an attempt to stop the rumours circulating, McCarthy married his secretary, Jeannie Kerr. Later the couple adopted a five-week old girl from the New York Foundling Home.

In October, 1953, McCarthy began investigating communist infiltration into the military. Attempts were made by McCarthy to discredit Robert Stevens, the Secretary of the Army. The president, Dwight Eisenhower, was furious and now realised that it was time to bring an end to McCarthy’s activities.

The United States Army retaliated by passing information about Joseph McCarthy to journalists known to be opposed to him. This included the news that Roy Cohn had abused congressional privilege by trying to prevent Schine from being drafted. When that failed, it was claimed that Cohn tried to pressurize the Army to grant Schine special privileges. The well-known newspaper columnist, Drew Pearson, published the story on 15th December, 1953.

After serving in the United States Army Schine returned to the family business. He married a former Miss Sweden and became involved in show business. As well as acting in Batman (1966) he produced two movies, The French Connection (1971) and That’s Action (1977).

On 19th June, 1996, David Schine, his wife and son perished in an air-crash in California. The single-engine plane, piloted by Schine’s son, crashed shortly after taking off from Burbank Airport.

Addendum II “Lustful Utterences”
Lustful Utterances is the true inside story Kitty Kelly’s (http://www.amazon.com/Family-Real-Story-Bush-Dynasty/dp/0385503245) The Family: the Real Story of the Bush Dynasty, couldn’t tell you.

Unlike the memoirs of Dominatrice Theresa Berkley, Domina Leola McConnell names names and shines the spotlight into some very dark corners concerning the domestic and international political agenda of the neo-conservative movement (toppling the governments of Iraq, Iran, Syria and Venezuela). Neo-con racialist William Bennett told Leola McConnell, how valuable [then] Congressman Gibbons (now governor of Nevada and currently the target of a FBI investigation) was to the next phase of the neo-con strategy of installing certain lesser known, but equally important members of their PNAC movement into important regional positions of political power throughout the United States, particularly in the Western US.

Roy Cohn and [then] Governor George W. Bush of Texas, giving America the finger on national TV. Both are described by Leola McConnell as two of the most morally bankrupt people she ever met in her life as a Domina.

Domina Leola McConnell on Roy Cohn, whom she first met in 1981:

Roy told me once, Muscles, I was born to end lives – and that he did, along with the lives he simply ruined out of pure meanness delaying their trips to the actual graveyard. All the while wallowing in a massive contempt for the human race, a pedophile-like contempt for innocence, well hidden from the lay eye but not to the trained eye of a competent Domina, poised to be suspicious of an inferiority complex masquerading as a superior one.

Coupled with not being interested in a 24/7 Domina or dominatrix type in general, I was too muscular to be of any real interest for him. A woman that could quite literally strangle him (http://beautifuldommemuse.tripod.com/dumbblchestpress50.mpg) to death, and he’d be utterly powerless to stop her, didn’t gel with his brand of misogynistic [faux] megalomania, something both Bloomingdale and Roy had in common. The D/s interactions between Bloomingdale and I were to be short lived based on the simple fact my Irish temperament was then, and is now, ill suited to misogynistic males who try and flip the script or switch — wrong woman, wrong century.”

Of course, Jeff Gannon is familiar with George W. Bush’s love for male-prostitutes:

The former White House reporter talks to The Young Turks. Watch the entire show at http://www.theyoungturks.com.

Time has come to expose george w. bush as the deginerate he is…