New records show that Republican presidential nominee Donald Trump misled the public when he claimed he made $694 million last year. Trump’s claims about his wealth, success and finances have been crucial to his voter appeal during his campaign.

During the first debate, Trump said that he made $694 million last year, and that his disclosure forms filed with the Federal Election Commission would reveal everything that voters needed to know about his income. The disclosure forms require federal candidates to state rough approximations of their incomes, assets and liabilities.

He says he made $694 million last year, but U.K. documents undercut that claim.

According to Trump, he collected $296 million in “golf-related revenue” last year, which made up 42 percent of the $694 million he claimed. His two Scottish golf courses are listed as earning him a combined $23 million in “golf-related revenue”last year, with Turnberry pulling in $18.1 million and Aberdeen making $4.8 million. The FEC figures don’t take into account the costs of running his courses and resorts. 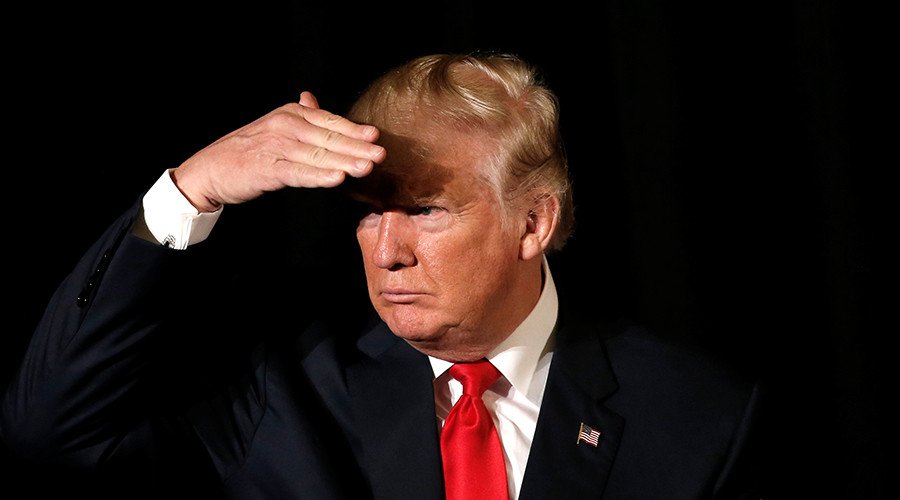 “The $694 million isn’t what Trump pocketed at the end of the day; it’s how much cash his various companies brought in before they had to cover expenses,” according to Mother Jones.

This can explain part of the popularity of#Trumphttps://www.rt.com/usa/361857-working-class-white-males-poorer/ …

American working-class white males with only a high school diploma saw a 9 percent drop in pay in the last 18 years, a new study finds. Even some who graduated college saw their incomes fall, but…

To date, Trump has refused to release his tax returns while he is facing an audit from the Internal Revenue Service (IRS).

“I pay hundreds of millions of dollars in taxes, but, as soon as my routine audit is finished I’ll release my returns,” he said according to the New York Times. “I’ll be very proud to.”

‘Grab them by the p***y’: Leaked audio of Trump causes GOP backlash http://on.rt.com/7rbq

Courting rituals change over time, but it was probably never OK to do what Donald Trump told Billy Bush he did to woo an unnamed woman. In 2005, Trump was chatting with the TV anchor without knowing…

Trump has been under fire since it was revealed by the New York Times that he used a nearly $1 billion loss to his advantage to avoid paying federal income taxes.

Voters in recent polls have shown interest in Trump’s taxes. A CBS News/New York Times poll last month showed that 59 percent of respondents said it was necessary for him to release his tax returns.

Trump called out billionaire Warren Buffett, chairman and chief executive officer of Berkshire Hathaway, for taking “a massive deduction,” in the second presidential debate. Buffet fired back, saying he has paid federal income tax every year since 1944, when he was 13 (and owed a whopping $7) and released detailed information about his taxes. 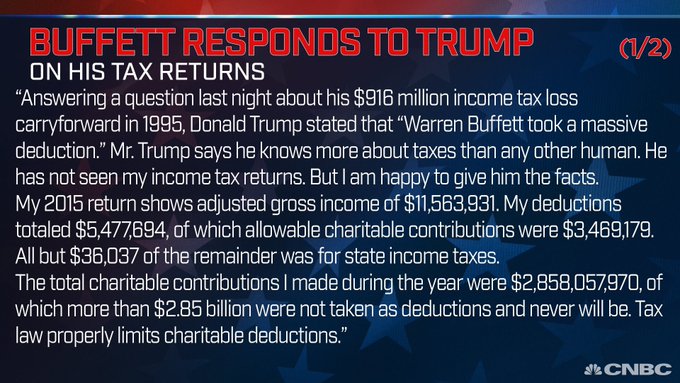 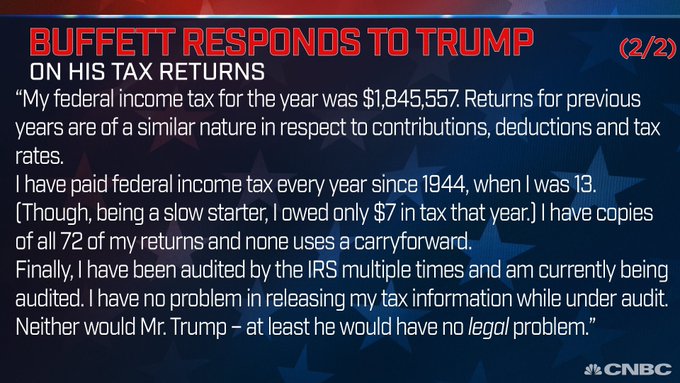